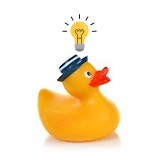 Jack of all trades in the field of Renegade IT and agile software development.