Are edits that only remove excessive indentation from lazy copy-pastes an improvement? How should we handle them?

I haven't been approving edits for long, but I frequently see edits to questions/answers that look something like this: 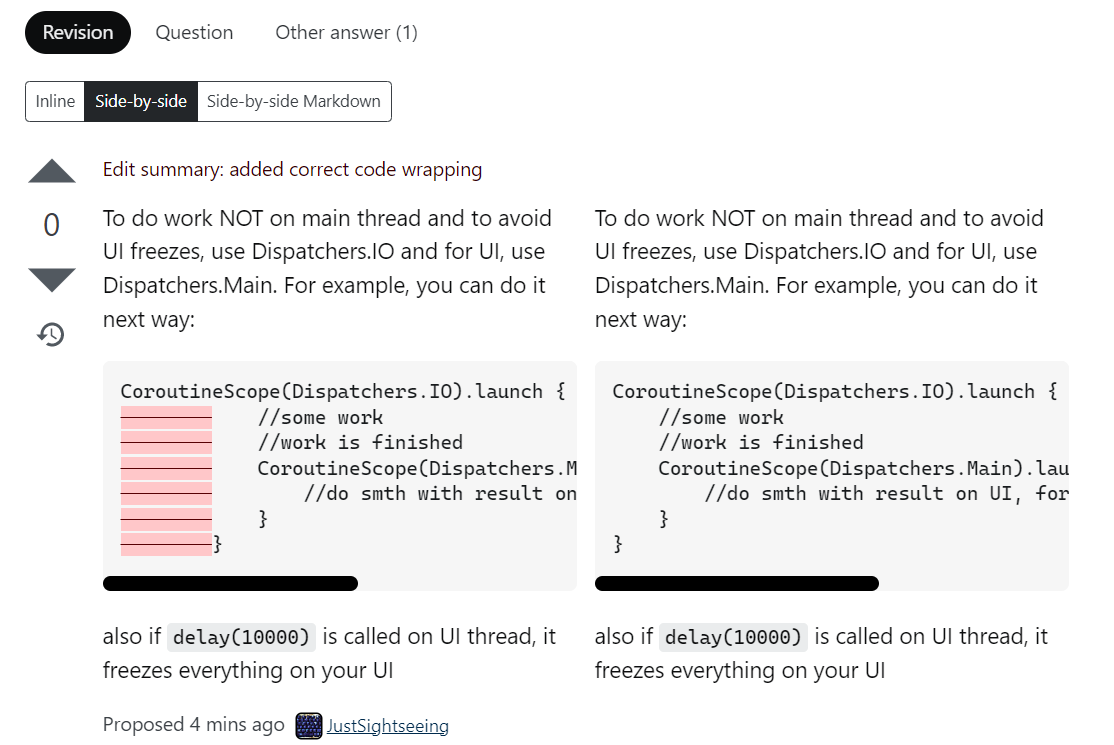 The best I can tell is that this means they deleted the white space on the left from the question. However, I'm not sure if this is an "improvement", as it doesn't fundamentally change the answer other than a very miniscule formatting change. I'm only familiar with the R coding language, so I don't know if these kinds of formats are useful in others, but my gut feeling is no.

So to summarize, what should one do in this situation? Approve the edit or reject for no improvement?

While proper indentation can be somewhat opinionated, we generally accept (and should accept) edits to indentation that:

Making code more readable is improving it. 12 spaces of indentation would be considered excessive by almost anyone, and the existing code used only 4 for the next level anyway. The code went from having inconsistent indentation, to having clearly defined levels of indentation each represented by the same amount of indentation (4 spaces, in this case). I think that's unarguably an improvement.

I believe it’s correct and necessary to fix code formatting to make things readable. In this example, it may not make a huge difference as the lines of code is very small but we should be consistent in correcting the code formatting.

In this review, one has correctly made the changes as it’s always 4 spaces on the left after the curly bracket in Java by default in any IDE (at least that’s what the language looks like).

Specifically addressing the criteria you appear to be using:

However, I'm not sure if this is an "improvement", as it doesn't fundamentally change the answer other than a very miniscule formatting change.

Read the How do I use the Suggested edits queue? help article:

How to work through this queue:

In summary, the official guidance is pretty clear that small improvements of formatting are encouraged, and edits that "fundamentally change the answer" (in the literal meaning of that word) should be rejected.

A long time ago in a galaxy far far away, we had a reject edit reason that covered exactly this scenario: too minor. This was unequivocally nuked (see #3 at end) for various reasons, one being the claim that "too minor" was too subjective.

The problem with removing this rejection reason, of course, is that the edit queue becomes entirely composed of minor edits by <2k reputation users who have figured out that it's the best way to farm rep. This entirely invalidates the original intent of that queue, which was to encourage substantial high-quality edits from new users while simultaneously discouraging them from farming.

What really should happen is that we have a bot that automagically performs these extremely simple formatting and spelling fixups, which would entirely prevent the farming problem by removing the ground from under the farmers' feet. Apparently however, allowing users to farm rep to the point where they are able to edit anything they want without oversight by anyone, is considered the lesser evil than having logical automation on what is supposed to be a programming website.

115
Reviewer overboard! Or a request to improve the onboarding guidance for new reviewers in the suggested edits queue
134
FAQ Index for Stack Overflow
2
Remove "please help" from the end of bodies
7
How to deal with serial minor edits

94
Proposal: let experienced users approve edits when they view the question first
37
Am I rejecting too many edits?
11
Should reviewers approve edits that only obfuscate private info like email?
16
Should I approve a suggested edit fixing a broken link in an answer I have flagged as "not an answer"?
28
User edited 'barely an answer' with perfectly complete answer
7
Edit suggestion rejected and edited
60
I approved an edit adding backticks and fixing a typo - was that so bad as to deserve a review ban?
24
Should I approve suggested edits that only add a language to a code block?