Why was my accepted answer deleted when it answered OP's question?

My answer to Is it allowed to fetch businesses from Places API and save them? [closed] which was accepted by the author was vote deleted 2 days ago (06/01/2022) after a discussion in the comments 4 days ago (04/01/2022) which was cleaned by both parties (me and the other user): 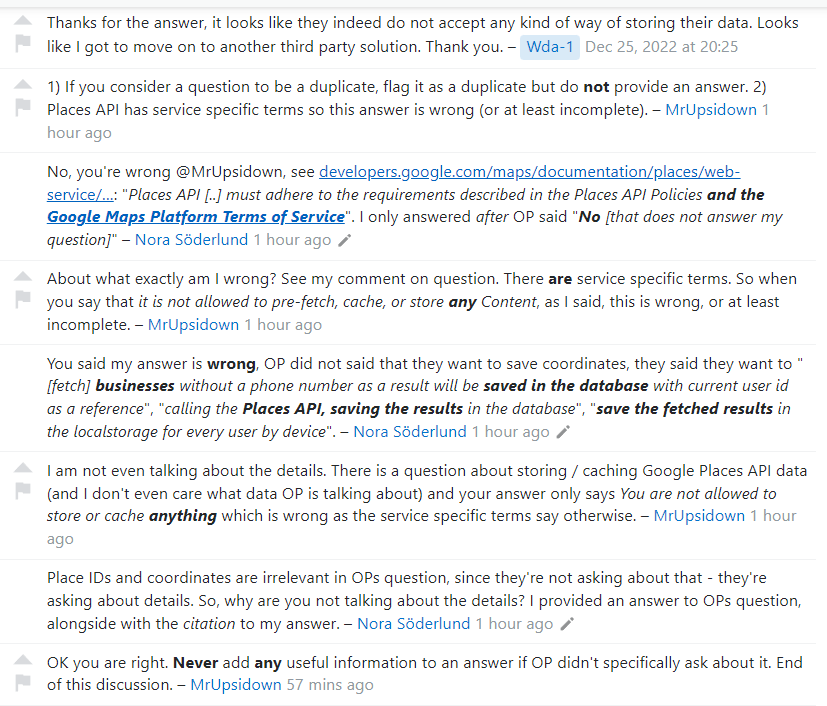 According to Why and how are some answers deleted?, an answer may be deleted if it do not fundamentally answer the question.

My answer was posted after I first flagged the question as a duplicate of Storing Google Places API data - is it allowed? (which stands unlocked as of today) and the OP said that the linked answer does not answer their question.

My answer answered OP's question and the answer was accepted by the OP.

The short answer is that no, it is not allowed to pre-fetch, cache, or store any Content, see 3.2.3 Restrictions Against Misusing the Services in https://cloud.google.com/maps-platform/terms/

What warrants my accepted answer to be deleted when the linked answer of similar fashion which was not marked as a duplicate by OP, still stands?

As one of the people that voted to delete the answer, I can give some reasoning.

Question itself was off topic and as such it doesn't belong to the site. Because it had an accepted answer that would prevent question from being automatically deleted when closed and having negative score.

It is all part of the cleanup process. If something does not belong to the site, it is better to be cleaned up sooner rather than later. In that regard it does not matter whether question was deleted or answer was deleted as long as final outcome is that both posts are gone.

Please note that there are many posts that don't belong on the site and that some might be open, but that does not mean they belong here. Also people that participate in cleaning and moderating the site are few and we don't have time to babysit each and every post waiting for it to be eligible for some action, so we will perform cleanup actions that make the most sense at the given moment.

Why was my accepted answer deleted ... - because three people voted to delete it, that's how community moderation works.

Also from Why and how are some answers deleted?

Answers can also be deleted by the community. Moderators can delete any answer, and trusted community members can vote to delete answers that have a score of -1 or lower (3 votes will result in deletion).

As to why those people voted that way, we can only speculate.

2
Question about a deleted answer
1
Changed accepted answer, and then the user deleted the one I originally accepted
49
My accepted answer was modified drastically. Is this allowed?
3
Why wasn't this question deleted?
28
Answer that is a duplicate of the accepted answer should be deleted
1
Why does the UI still show "Accepted" icon for an "Accepted" answer which has been deleted?