Is it all just opinion? [duplicate]

Ask Question
Asked 2 months ago
Modified 2 months ago
Viewed 260 times
-34
This question already has answers here:
Is there a place on Stack Exchange for programming discussions? [duplicate] (2 answers)
Closed 2 months ago.

As I have used Stack Overflow, as well as the larger network, a common recent experience has been that questions are characterized as "opinion based", which is then given as a reason for then closing.

Some questions one may conceive plainly are matters of opinion, such as identifying a favorite programming language.

Others are clearly factual. I have found one question (Convert JavaScript String to be all lower case) that leaves very little room for discussion, and has proved quite popular. I doubt though it gives anyone an opportunity to achieve some great leap of comprehension.

I found another question (Groovy / Scala / Java under the hood) that is more discursive and general, targeting differences in programming languages. It has been far less popular, compared to the one given above, measured by vote count, but surely has survived, and inspired many detailed and enthusiastic answers.

Generally, the characterization as an opinion is given to that which has little or no ability to be corroborated independently, especially matters of speculation and preference, or to be discussed toward the convergence of rational consensus.

In comparison to the above question about Groovy and Scala, which is targeted, but also heavily laden in personal experience and indirection of objective, I have addressed the same general subject domain by posting my own question (Groovy, Kotlin, Scala: JVM-compatible languages current usage patterns). It was quite broad, but also clear, direct, accessible, detailed, germane, and as far as I know, and I would be happy to learn otherwise, accurate. Certainly, its nature was of heavy orientation around objective characterizations.

Yet, it was closed, and characterized as an opinion.

The guidelines include the following remarks (quoted selectively for brevity and relevance): "Some subjective questions are allowed... Constructive subjective questions [are those that]... inspire answers that explain why and how... tend to have long, not short, answers... have a constructive, fair, and impartial tone... are more than just mindless social fun." It strikes me that these characterizations align closely with the question.

A robust answer would be possible, one grounded on uncontroversial observations and elucidating a space attracting wide interest. It has not been asked which of the languages is superior, even for some purpose, only the differences, of which many might be corroborated even by their designers.

Yet, instead, we have elevated to highest esteem learning how to change character case. Do we truly wish to be so narrow, as a community?

Compared to Java, how are each of these languages (Groovy, Kotlin, Scala) currently being used across science and industry in enterprise, desktop, mobile, administrative, and analytics applications? 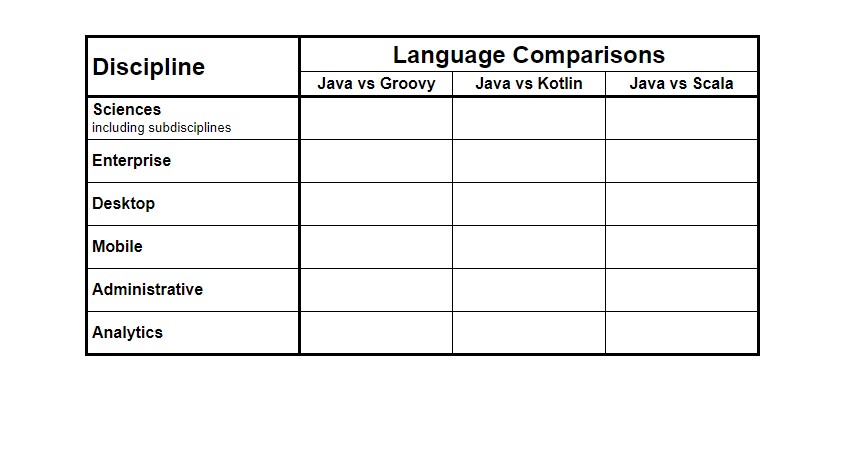 Where each cell in this question matrix could easily require a book chapter or more to answer properly, and given the complexity and broad reach of the information requested would likely generate multiple and differing opinions (a key word here) leading to lengthy discussions, and disagreements, all making the question wholly unsuitable for this site.

Further more, you state in comments,

"...which cannot be effectual if questions are killed artificially by a judgment in defiance of those methods..."

Again, none of the mechanisms described are considered artificial or natural, but rather mechanisms that the site allows to allow member curation of the site. But you are implying that some of these decisions are "in defiance" of some "natural method"? What is natural? Who are you, or me or anyone to judge this? We have tools and we use them as best we can, in what we, the individual members, perceive are the best interests of the site.

If one of us disagrees with this decision, then a common mechanism for seeing if the decision was felt to be poor by the involved community is to pose a question on meta and see how the involved membership votes. I think that you/we are seeing these results, and the results appear to be unambiguous.

Yet. instead, we have elevated to highest esteem learning how to change character case. Do we truly wish to be so narrow, as a community?

Yes, we do. The community doesn't want broad, opinion-based discussion threads, just practical programming questions and answers. There are other sites for discussion that may offer an "anything goes" atmosphere, like Quora and Reddit.

If you think SO is too narrowly scoped, consider that there are 23 million questions on the site at the time of writing, with thousands of new questions posted per day. Curating that body of knowledge takes a huge amount of work (mostly by volunteers), so narrow focus is critical to keeping the site the usable resource that it has been for over a decade.

From the site tour:

This site is all about getting answers. It's not a discussion forum. There's no chit-chat.

From the What types of questions should I avoid asking? topic in our help center:

Your questions should be reasonably scoped. If you can imagine an entire book that answers your question, you’re asking too much.

The question you shared and the 12-year old question you referenced in your post as justification for it don't appear to be within the bounds of these guidelines regardless of whether they're interesting or well-asked in their own right.

Many old threads were posted before the community had the standards it does now and continue to exist either for historical purposes or because they've evaded curation, but would be off-topic if asked today.

Furthermore, the Convert JavaScript String to be all lower case question you cited is also not a particularly great question since it shows no obvious attempt or research. It just happens to have picked a piece of low-hanging fruit back in 2008 and became a canonical resource for a common, practical and answerable problem.

-6
Is there a place on Stack Exchange for programming discussions?
239
Do we need a close reason for zero-effort questions?
30
Should I answer good questions for which the OP has not tried anything (no effort at all)?
58
How to reduce and quickly close questions that are merely requirements?

2
How should we handle people giving answers that are clearly just opinions?
20
Let's *not* delete questions that still have value