Get rid of google tag

google tag has no questions, no wiki and no synonyms.

Can we get rid of it? google sounds like a much too broad tag and I see no reason for it to exist.

You have not stated your reasons to get rid of this tag. Anyway, it apparently has been sitting that way for a while. From Zoe's comment:

No, I mean they've identified the cause of the bug that prevents tags, including this one, from dying. This was months ago, and I was told there was a developer on it, but that it wasn't clear if it'd be fixed. Months later, it's clear that it won't be. Fixing the bug preventing the tags from being deleted just means fixing the reason they're identified as having a single question when they clearly don't, which lets the system do its job again. That's not happening any time soon, if at all

According to the tags page, google has 1 question.

According to the tag popover, google has 3.8k watchers and one question. 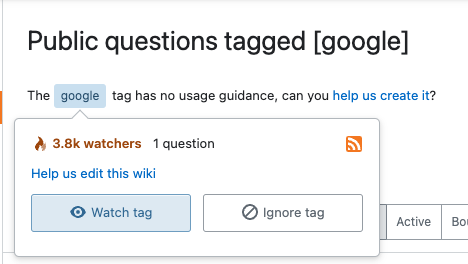 36
Is adding company name tags spam/vandalism?
26
Throw out the [in] tag
8
Is the "The Death of Meta Tags" finished?