This question (How to save program work data in JSON format) was edited twice within five minutes after posting: 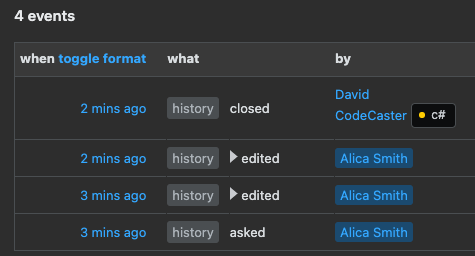 These edits show up in the history, despite taking place within five minutes after posting and without any comments being posted.

Shouldn't revisions done within five minutes of each other be collapsed into one? Or were comments removed after each edit?

As mentioned in the new user privileges page, users with less than 10 rep cannot make edits that don't create a post revision history, i.e. they don't have a 5 minute grace period for edits.

This change was made relatively recently in 2022-05-13 (see Recent feature changes to Stack Exchange when you feel some mechanism on the site behaves differently than what you're used to).

This change was made in response to a spam wave, where the spammers had stumbled upon the fact that changing a seemingly legitimate post into spam within the grace period would allow it to escape detection by Smoke Detector. Smoke Detector is one of the primary defenses against spam and abuse on the network, so this was something that needed to be fixed. Removing grace period edits for new users essentially eliminated this loophole since most spammers don't have any reputation when they're posting content.