How should we handle suspicious questions with close-explanations in question-text? [duplicate]

While reviewing triage today, I encountered this question. In the question, you'll find text that is shown when a question gets closed for not being focused enough. But it is not shown in the usual blue information box, but as the text of the question itself. The text has been there since the initial question. 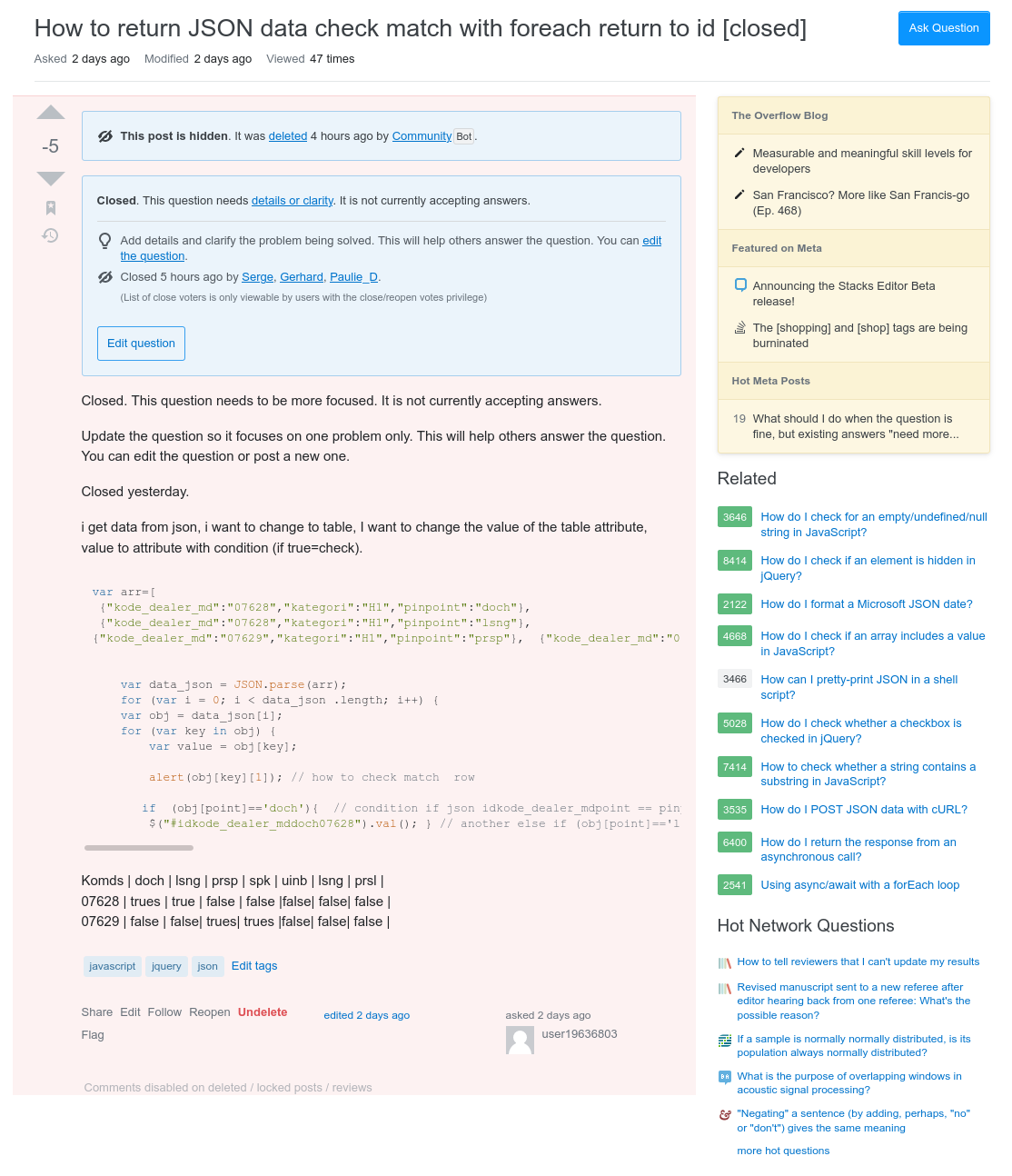 To me, this looks like a bad bot that included this text in its generated question, as it appears often. Is there another possible explanation for this? What would be your course of action?

Why does this happen?

As mentioned in the comments to the question, most instances of this are likely due to a user reposting a question that was closed. This is not necessarily done with bad intent, but instead is due to a misunderstanding of how the close-reopen process works on the site. This misunderstanding stems in part from the misleading guidance in the close banner which says "You can edit the question or post a new one". There's an existing discussion about this issue and how to deal with it: "How do I ask a good question" page needs explicit statement "Don't repost your questions"

For example, this question is a repost of an earlier question that was closed. The original question was edited to comply with the site policies, and was eventually reopened, but based on the comment by the OP, they simply misunderstood what should happen, and reposted the question. The OP may even have thought they're supposed to include the close banner message in the repost, and did it intentionally.

This happens with reposts of deleted questions as well, for example this question (see Rev 1), which starts with

It also happens with reposts of deleted answers, and you'll see the same message as above, for example [1], and [2]. Note that both answers were originally posted on the same questions and were deleted. In the 2nd example, the OP even followed the advice on their original answer, asking them to translate their answer to English.

And sometimes, it's just a careless copy-paste error, for example here, where it looks like the user copied the question text into the answer and accidentally copied the close banner message as well. (The question was closed a minute after the user posted the answer so this was probably the result of a grace period edit, as there isn't a revision history on the answer).

What you should do:

When you see this "banner as text", go ahead and edit it out, since it's definitely not something that should be in a question (or answer).

Reposting content is not allowed on the site, so you could inform the user about this and ask them to edit their original post into shape instead. Questions containing a close banner message is a strong indicator of a repost, so you can look at the user profile to see if you can find the original. If you do, you can flag the new question as a duplicate of the original, and vote to delete it once it's closed. If the user keeps doing this (reposting closed questions), the quality bans will kick in soon enough.

If you notice that there are multiple accounts involved, e.g. the repost is from a question posted by a different account, that's an indicator of something more problematic, such as ban evasions, and for that you should raise a moderator flag. See the FAQ Why was my custom flag declined? When should I use a custom flag? which goes over which situations are appropriate for a custom flag.

It's fine to err on the side of caution, and raise a custom flag even if you're not completely sure there's any ban evasion or similar thing going on. After all, it's better to be wrong and it turn out there's nothing problematic going on, rather than not flagging when there is. Also, investigating such issues usually requires being able to search for deleted content, which can be pretty much impossible for regular users, and would need a moderator to investigate. As always, make sure to be as clear and explicit as possible in your custom flag so that moderators know what you mean.

19
How should I handle users reposting their closed question with minimal title changes?
131
"How do I ask a good question" page needs explicit statement "Don't repost your questions"
66
Why was my custom flag declined? When should I use a custom flag?

12
Triage post states it is a duplicate, but is considered "OK"
11
How should I review answers with screenshots of code in Low Quality Posts?
23
Why is this typo question a post in review?