This experiment is now live! You may start seeing the new updated visuals on vote arrows. The experiment will run for about two weeks (or until we've collected enough data).

This week, we're rolling out a test to update the appearance of voting arrows for both questions and answers, which will bring some accessibility gains, namely affordance, feedback, and meeting WCAG compliance; it also maintains aesthetic cohesiveness between services, by bringing them in line with the voting displays on Teams and articles within Collectives. To be clear, this does not include comment voting arrows, nor does this update include any changes to the mechanisms in voting.

First, the up and downvote buttons are getting fancy new coats. Wrapping the vote buttons in an outline like this makes them look more actionable, which is an environmental clue for users, especially new ones. (These are buttons, come press them!) This should make them easier to use and more obvious, which should lead to more engagement with them.

We're also updating how the arrows look after a user has voted. The older arrow contrast change upon voting does not meet WCAG accessibility contrast tests. Along with updating the color for compliance, we're also adding clearer feedback for vote status. You'll see contrasting colors for up and downvotes. This offers more clear and visibly distinct feedback upon voting.

While the new Upvote/Downvote button design is a nice attempt at a new style: 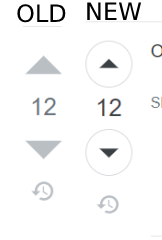 Compare the whole layout of an answer post with the "new" buttons VS the old buttons: 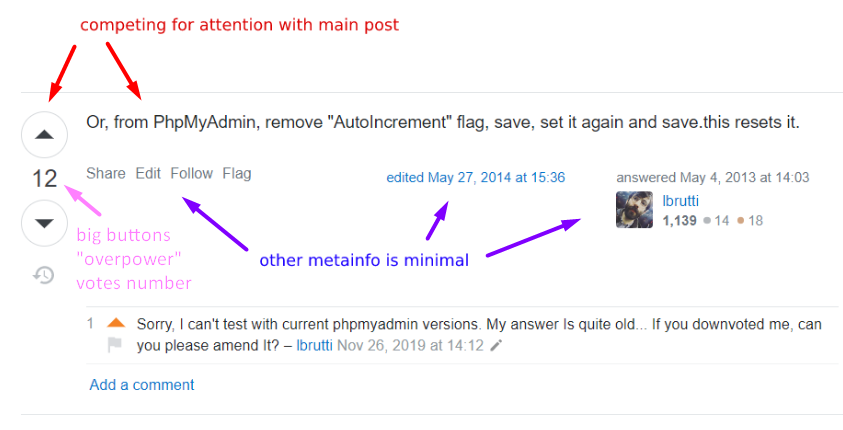 Looking at this, the old buttons also look a tad too big. Here are some alternate suggestions I quickly whipped up:

The only positive outcome of this redesign is that there's now a clear separation between the "sidebar" (with the voting buttons) and the main post area -- the two "columns" appear more nicely. With the old buttons, the distinction is a bit blurry and everything seems a bit "floaty".

Is the tick icon planned to be changed to a button (for the asker only, and Admins in Teams) too? If not, then I feel like this would conflict with this statement:

Wrapping the vote buttons in an outline like this makes them look more actionable, which is an environmental clue for users, especially new ones. (These are buttons, come press them!) This should make them easier to use and more obvious, which should lead to more engagement with them.

If the vote arrows are now vote buttons then the tick icon will look less actionable if it isn't a button too, in my opinion.

Without Accept as a Button (which any who wasn't the asker would see regardless of a change):

With Accept as a Button (which only the asker (and Admin?) would see):

*Please excuse the awful image skills and any saturation differences.

The styling for a focused non-checked button is a little ambiguous on dark mode compared to light mode:

The fill color is pretty noticeable on dark mode, which might lead some users to mistakenly think that the button is checked. This can happen by selecting the button using the Tab key or by clicking the button to undo the vote:

What will the HTML look like? Will it be easily revertible with custom CSS?

While I fully understand this change and applaud SO for making the site accessible, I'm probably not the only one who prefers the classic look.

MMMMMM
30922 silver badges66 bronze badges
New contributor
MMM is a new contributor to this site. Take care in asking for clarification, commenting, and answering. Check out our Code of Conduct.
7
Add a comment  |
36

I have two requests...

(Prid's answer, posted a few minutes after this, expresses the same sentiment but with nice diagrams showing actual before/after spacing, and with more specific reasoning for why it's distracting and feels cluttered even in light mode. If that answer had existed already, I probably wouldn't have written this.)

In dark mode, my initial impression of the new buttons is that they're too big and obnoxious looking. Too large a circle becomes bright on a post I've upvoted, distracting the eye from the vote total. (See Phil's answer for a screenshot of just the buttons, but it's more apparent if you look at that big orange circle on a whole page of dark grey background with off-white text.)

The vote total is the most interesting thing, especially with the new trending-sort option that makes vote total non-monotonic as you scroll down the page, making it even more interesting to look at them. Not at these giant buttons that are more eye-catching that the number, especially on posts I've upvoted.

Maybe this is something my brain will just get used to, I don't know; I'm not a UI expert. I just know I disliked it enough initially to find a meta post about it where I could chime in my 2c.

If there's a significant accessibility benefit, it's something I can accept as a compromise, but hopefully something can be done. I'm not a UI designer, don't have any specific suggestions for how it should look that would still achieve any accessibility goals.

The previous design is quite nice; the orange triangle for an upvote is bright but limited in area, and far enough away from the vote total. If I had an option to keep that design, I would.

Even on posts I haven't voted on, I don't like that the new circle around the vote arrow comes a lot closer to the vote-total, distracting my eye taking it in with as quick a glance.

Wrapping the vote buttons in an outline like this makes them look more actionable, which is an environmental clue for users, especially new ones. (These are buttons, come press them!) This should make them easier to use and more obvious, which should lead to more engagement with them.

You say you want the vote buttons to look like buttons to provide a recognizable environmental clue for users? Well, then please consider the following modest proposal (interactive demo in the code snippet below):

Maybe it's just me, but my brain doesn't easily recognize the "it's up-voted" part.
Now it takes effort. (not good) 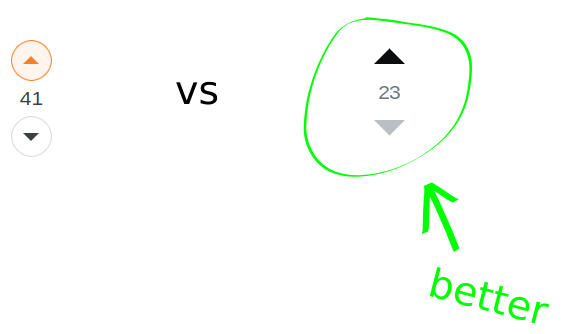 No visibility of highlight in high contrast dark mode

I am in the B group with the new buttons and have been since the experiment started. I was shocked to learn that there is supposed to be highlighting on hover. Can you blame me? Here is how the buttons look:

If it is not very clear from the screenshots, here is an animation

I sincerely doubt this meets the WCAG compliance. Which is quite bad, considering high contrast mode whose goal is to make Stack Overflow meet or exceed WCAG AAA contrast criteria.

As many others have stated, the design doesn't really match the site. I would propose removing the border-radius: 1000px; and changing the padding: .8em; to a .6em, so it doesn't take up too much space.

Here is a preview of what that would look like.

Trix07Trix07
2644 bronze badges
New contributor
Trix07 is a new contributor to this site. Take care in asking for clarification, commenting, and answering. Check out our Code of Conduct.
1
Add a comment  |
6

It's not in the middle, is it?

Maybe because you can't put an arrow with a two pixel tip into the center. The arrow needs a redesign.

Update: this seems to happen because I browse Stack Overflow at 90% zoom in Firefox. It looks better at 100% zoom, but that's too big. (And yes, Windows as the underlying OS is already set to 100%, not 125%)

Is this test also going to do anything with the tooltip?

There's one more button in the layout, the post score (which is available to all users with 1k rep), and it's now nearly impossible to tap without accidentally voting:

A quick measure shows that the vote buttons are 40.8px square while the score is less than 26px tall.

That's a failure for WCAG 2.5.5: Target Size which requires that controls be a minimum of 44px square. (The old buttons were better, though they probably still failed this — and indeed I had problems misclicking with them too.)

Please fix this. It affects not only mobile users but also anyone with a condition that makes it hard to precisely click.

I have to say I find the new buttons quite ugly and have been really bothered by them since the change. They clash significantly with the rest of the UI and look like they were designed for touch/mobile instead of a desktop.

The classic arrows are superbly designed and, in my opinion, are the most iconic part of stack overflow. I associate them even more strongly with the brand than I do the actual logo. As a result, this change goes beyond a simple UI tweak for me and also impacts the part of the page I always look at first (as well as most frequently).

I strongly recommend you do not keep this new change.

ColeCole
43322 silver badges33 bronze badges
New contributor
Cole is a new contributor to this site. Take care in asking for clarification, commenting, and answering. Check out our Code of Conduct.
Add a comment  |

Not the answer you're looking for? Browse other questions tagged discussion featured voting user-interface a-b-testing .

43
Guidance in the accept tooltip
100
New Styles? New shade of green for accepted answers? It's not easy... being green
427
The Ask Question Wizard Is Now In Testing!
37
Some crazy ideas that might help voting and make the "Thank you" reaction redundant
117
A/B testing on the Ask page
157
A/B testing of a "Trending" sort option for answers
73
Trending: A new answer sorting option