Can we see the original form of the survey questions? For example, the very first question in the Developer Profile, "Learning How to Code", it made it seem like you only learn from one source (when viewing the data by age): 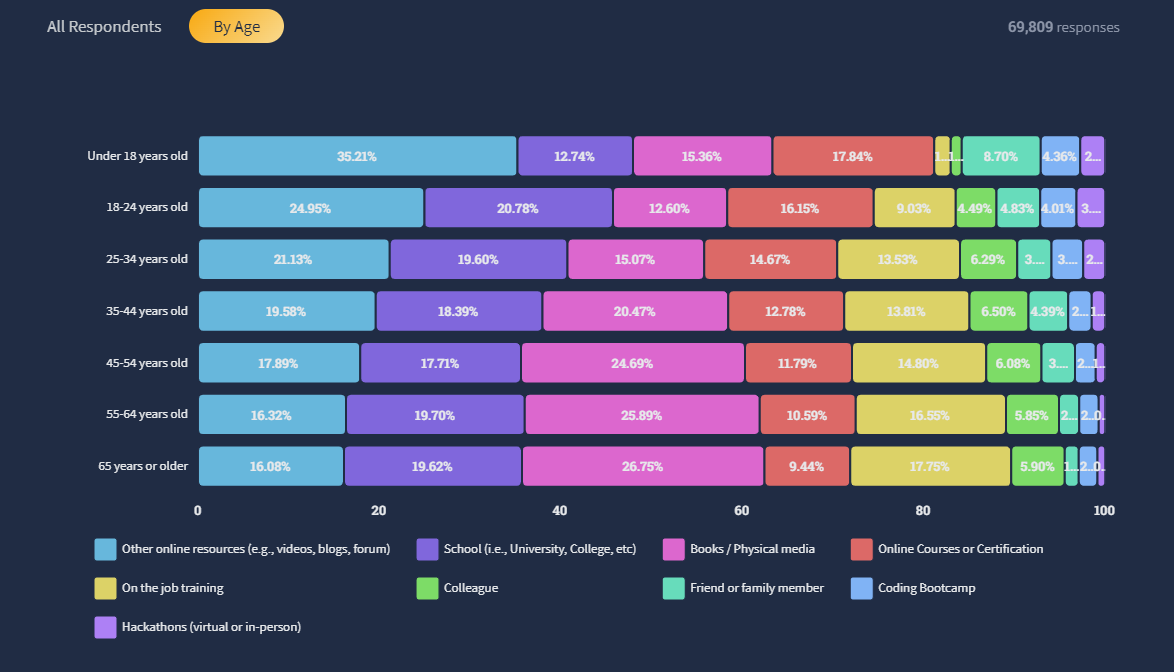 I could have sworn that the question stated "check all that apply". Hence, it makes absolutely no sense, from a statistical/ survey perspective, to try to show them as "buckets" by age: 2022 Survey Learning How to Code by Age (you will have to click the button "by age" to see my point).

First– (as you discovered) all result panes in the released summary of results include the original question noted below the results view, in the bottom left corner:

How did you learn to code? Select all that apply.

Second, I completely agree that on this particular question the distribution doesn't make sense, at least not as currently rendered.

If we compare the age view to the "all respondents" view:

The "all respondents" layout makes total sense– the bars don't total to 100%, because the responses included in one bar aren't mutually exclusive from another.

In the age view, however, the bars do total to 100, which I can't figure out how to rectify with the question wording. I have a hunch that this is just an improper rendering of the data, rather than an improper understanding of that data, but the point remains that the percentages are either completely wrong or just useful for comparison, which is still misleading. These bars should not total to 100%.

So, to your point, unless we're both misunderstanding something, either the data was interpreted wrong, or the rendering of it is wrong, and something about the age view should be updated to rectify it.

Thank you for flagging this!! The chart was rendered incorrectly as some suggested. It was rendered as a stacked bar when it should have been a clustered bar.

It will now correctly show; The percent of respondents within each age bin that used each resource. Also, note that we order the choices by the order set in All Respondents to stay consistent across each age bin.

Plus we get to keep the rainbow aesthetic!

Not the answer you're looking for? Browse other questions tagged discussion bug status-completed survey survey-2022 .