Results of the Trending sort experiment

In this post, we'll go over how the Trending sort experiment went and why we chose Decay-50 as our preferred choice as announced in Trending: A new answer sorting option. We'll summarize both the objective metrics we measured through our experiment data as well as the response to the survey we prompted during the first time you used Trending sort. You can see the definition of the experiment in A/B testing of a "Trending" sort option for answers.

How the algorithms work 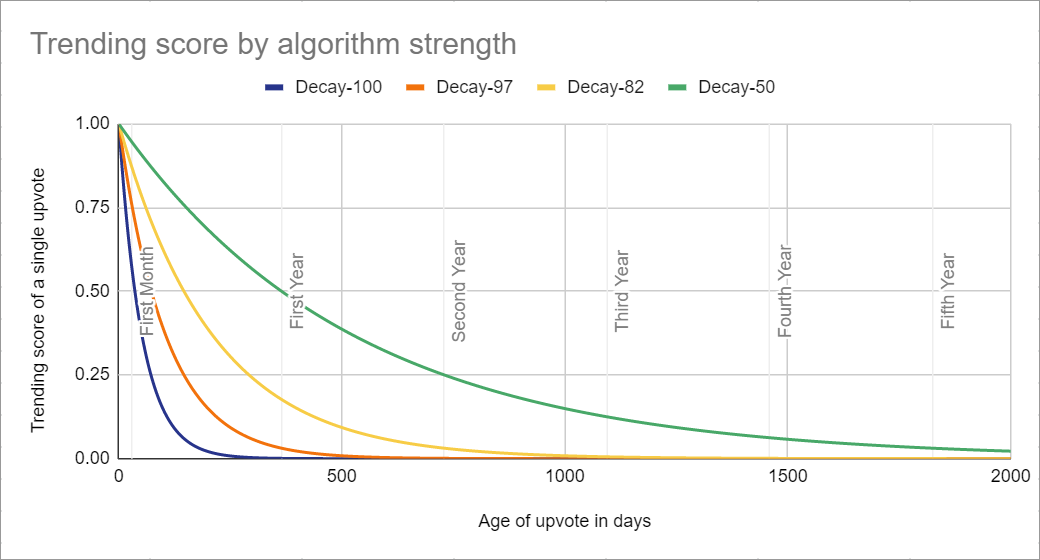 Through a combination of several metrics we measured during the test, we found that Decay-50 outperformed all other options. We analyzed this change similarly to the Unpinning experiment. The specific metrics we tracked were:

We did an A/B test on the four decay algorithms compared to a baseline of score sort. The tables below are results from copies and votes under various conditions, measuring the lift compared to Score sort.

Copies or votes on all posts

We measured whether or not a post got a copy or vote event. Decay-50 saw a 4.46% lift compared to the baseline Score sort.

Copies on an answer

This funnel measured when a copy occurred on an answer anywhere in the post. Decay-50 saw a 4.88% lift compared to baseline.

Copies on the first shown answer

We know that many users value the first answer shown on the page (part of the reason we are creating Trending Sort!). This funnel measures copies on that first shown answer only. The lift compared to baseline is significantly lower than copies overall, but we still saw a significant lift across all four algorithms.

Position of Answer When Copied - % of Population by Algorithm

Much like the copies on the first shown answer, copies beyond position one are also important for sort. Most will copy the answer in position one, and that is true regardless of the algorithm.

This table looks at the percent of all copy events based on the position on the page. 55.8% of all score sort copies happen in position one, and we see a similar percentage across most of the other algorithms. That distribution to position two and beyond also looks similar between the algorithms.

Upvotes on an answer

Upvotes are more rare than copies. We measured them as part of this experiment, but didn’t find any significant lifts in either direction compared to score sort.

Copies on Answers Over Time

In the graph below we look at the copies for each sort over time, based on the age of the answer in months. Newer answers tended to benefit from more aggressive decay algorithms. As we approach the five year mark, we noticed that older answers are indistinguishable from baseline. 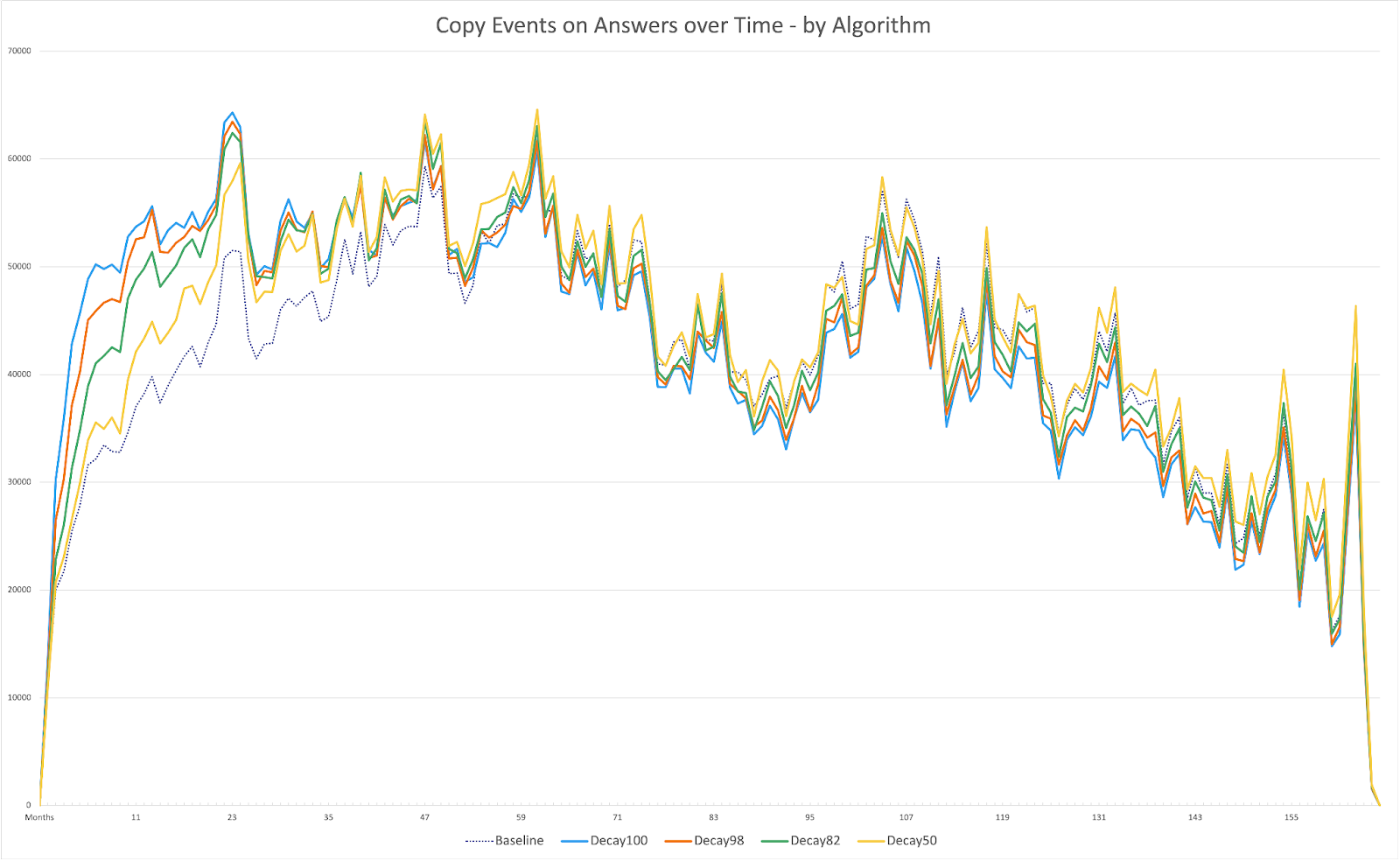 The drop in performance for 5 year old answers lined up with the condition we had that excluded votes older than 5 years old. For this reason, we are not excluding any old votes in the version of Trending sort we launched.

The first time you viewed a Trending question, you were able to respond to a survey on the given sort's effectiveness. We collected responses for both the baseline of Score as well as each Trending sort variant. It's difficult to summarize all this subjective data, however in general Decay-50 was subjectively the best option.

The survey prompt was "Are the answers sorted in a way that puts the best answer at or near the top?". Decay-50 did not have a significant difference from the baseline of Score and the more aggressive algorithms got progressively worse.

We asked about the effectiveness in a few ways:

Score performed as we expected. When it works, people find that highly upvoted or accepted and/or accepted answers have good quality and can be trusted. When it doesn't work, the top answer was outdated, low quality, or a better answer was found further down the page.

Decay-50 performed similarly to Score and tended to perform better than the other algorithms. When it worked, it surfaced newer answers at the top, saved time on finding the best answer, and was friendly to newer users since they didn't have to read more answers for relevance, and had good answer quality. When it didn't work, it was difficult to tell why answers were sorted the way they were, they had trouble finding the accepted or highest score answers, and they had to compare answers to find the best one.

All data pointed towards Decay-50 being the best candidate to ship for our launch of Trending sort. It did not perform significantly worse than our Score sort and outperformed all other algorithms. We are confident that this option will be successful and will tend to put relevant answers at the top.

Thanks for the analysis. The chosen final decay value of 50 is at the border of the investigated interval (50-100), so it might be that non-investigated values below 50 (say Decay-30) perform even better. However, at some point there would not be enough difference to basic score sort to warrant another sort option, so I think that this is the absolutely right choice and people can now personally try them both out and see what works better for them. Looking forward to it.

The observed differences in behavior seems to be relatively small overall except for copying of code, indicating that in most cases maybe there aren't really many newer, more up-to-date, better answers and people do instead edit old, popular answers. Copying as a metric in itself is not ideal, because many good answers do not need to offer code for copying. More copying doesn't necessarily equal higher quality of the content.

In any case, it underscores that voting is not a magic bullet to define content quality. It's still the best available thing but far from perfect and weighting of votes can in some cases bring improvement and not so in others.

For further fine-tuning, maybe concentrate on answers with very low number of votes, where Decay-50 might increase noise (due to small numbers) in the ordering and maybe trending sort should be more conservative there and on answers with high number of votes, where a more aggressive decay might help surface updated content better without increasing variance of the sort order too much.

Finally, would it be possible to separate the existing results by major tags and look for differences? Some technologies might change faster than others and so optimal decay rates might be different for different tags.

However, since voting didn't really significantly change, maybe the whole problem with outdated answers wasn't so big after all either because the top most scored answers are most of the time the best (with notable exceptions) or because people do actually scroll down and do compare with newer answers.

Thanks for releasing this analysis.

There's something in this data that seems really strange: copies overall vs copies from first position.

Do you know what is driving the change in copies if not copies from the first position? I see the table under "Position of Answer When Copied," but this doesn't really clarify it - this is the position of the copy assuming that a copy was made. Could we see a table of how Decay-50 did relative to baseline, broken down by answer position?

Not the answer you're looking for? Browse other questions tagged discussion answers sorting a-b-testing .