How can I improve this question to get it reopened? 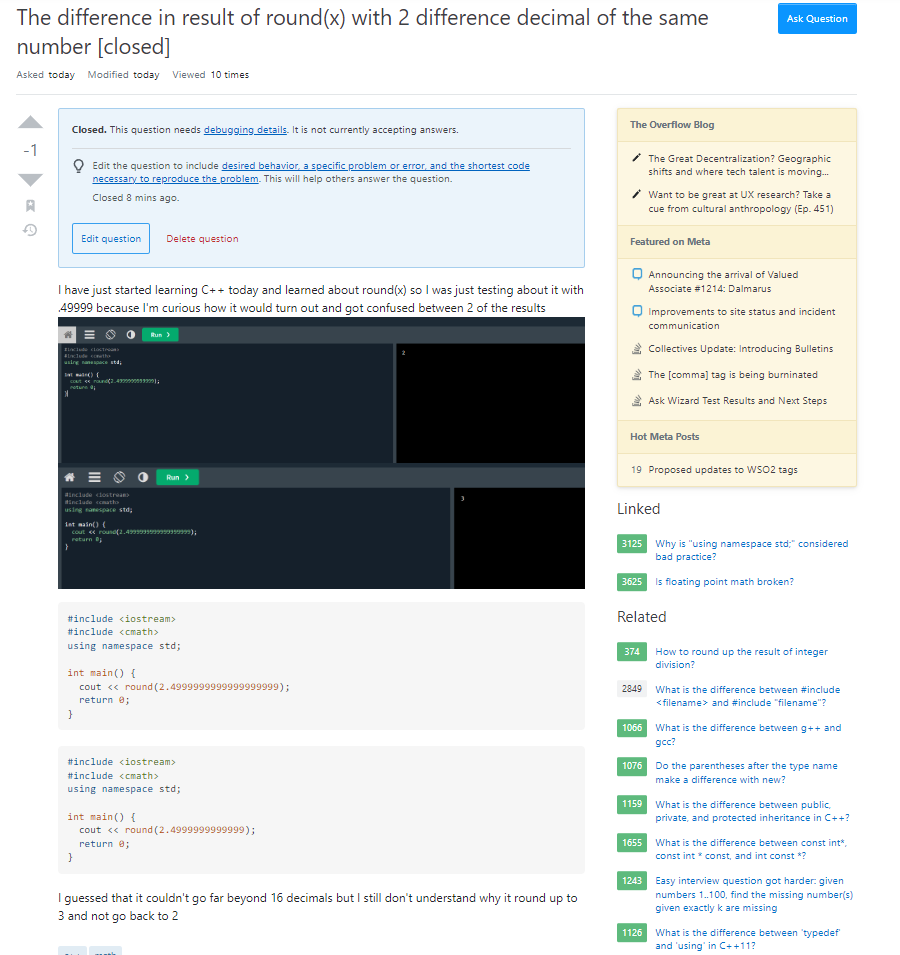 As the title said, I'm confused as to what I did wrong to get closed. I'm not irritated, either, I just want to know to improve myself; but from what I saw, it said to make the question easier to answer and also make the code as minimal as possible (which now I know it is because I use using namespace std from the comment) but is that enough to get closed or is it something else? I want some constructive feedback, please.

Link to the question

I disagree with the closure reason of needs debugging details. There are two complete programs (formatted using appropriate markdown) which are complete and can easily be run to reproduce the behaviour described. One value rounds up to 3 and the other rounds down to 2, which doesn't quite follow the human understanding of numbers (2.4999999999999999999 < 2.5 so it should round down).

While it is true that there are also images of code and output (which are unnecessary and discouraged), that does not change the fact that the minimal necessary information is contained within the question in a useful format (appropriately formatted text).

Having said this, however, I do believe the other close vote which proposed a duplicate of Is floating point math broken? was likely correct as it explains the underlying cause.

Here are some hints for asking better questions in the future:

Let's consider the original text of the question:

I have just started learning C++ today and learned about round(x) so I was just testing about it with .49999 because I'm curious how it would turn out and got confused between 2 of the results

The most glaring issue here is that this does not ask a question. While it is not a strict requirement, the best way to ask is to write something that can actually be considered a question - i.e., start with a question word like "why" or "how", and end with a question mark ("?"). Aside from that, the first sentence is a confusing run-on sentence, and the second lacks proper punctuation.

It's also hard to understand the description of the problem, because the wording is vague. Where you say, "I still don't understand why it round up to 3 and not go back to 2" - what is "it"? What do you mean by "going back to" 2 - in what sense was "it" "there" in the first place?

Instead, be precise with the claim:

Then, convert that to a question, by just pulling out the indirect question:

At this point we notice that the first part of the original, "I guessed that it couldn't go far beyond 16 decimals", is not useful and should be omitted entirely - it does not help to understand the problem. (It only makes the answerers wonder: why 16 decimals, instead of some other number? What is "it", and what does "going" mean here?)

The first sentence is useful context, but it should be several sentences. Our first draft would look like:

I have just started learning C++ today, and learned about round(x). I was just testing about it with .49999 because I'm curious how it would turn out. I got confused between 2 of the results

Let's fix up the grammar a bit and explain concepts more clearly:

I just started learning C++ today, and today I learned about the round function. I was testing it with numbers with a decimal part close to .5, because I wanted to see how it would turn out. I got confused by these two results:

This is not a discussion forum

It's hard to say this in a nice way, but: we don't care about your level of expertise, or about the path you have been taking to learn programming. These things do not help answer the question, and Stack Overflow is not about being a programmer, but about the code. If you are trying to become a better programmer, or chart out a path for yourself, actual discussion forum sites like Reddit or Quora are much better equipped to help you.

On Stack Overflow, we edit questions to remove noise. It's better if the asker does this in advance.

In this case, saying that the results are confusing is redundant - since we just finished fixing up the question, which is exactly about those results. You wouldn't be asking if you weren't confused. It normally isn't necessary to justify the fact that you were experimenting with some code - this is a natural thing to do. (There are times when people will ask you "why do you want to do this? What problem are you really trying to solve?", but IMHO it is better not to try to anticipate this.) And, again, it isn't necessary to mention how you discovered the round function in the first place.

Putting the two pieces of text together, and re-editing with those hints in mind, we get something like:

This version of the question probably looks quite barren. Most questions should be fairly sparse, but I agree that this version goes too far. There is one crucial piece of missing information here: the expected behaviour. Let's add that:

Please allow me to add one more link to Why should I not upload images of code/data/errors when asking a question?. I agree that the original question had all the necessary information, because it had text in addition to the screenshots. However, the screenshots therefore redundant, and noisy. Many people who see screenshots will tune out immediately, and not notice the accompanying code.

Worse, the screenshot displayed the code (and output) in the opposite order from the formatted textual code - making it harder to talk about the examples. I initially wrote this post using phrases like "in the first case" and "in the second case", and then realized they would be ambiguous.

If you want to show program output, that should also be textual unless it is a GUI program. In this case, the output is small enough to show inline, as above. If you have multiple lines of input, please copy and paste from the terminal, and format it like code.

170
Why should I not upload images of code/data/errors?
8
Kind reminder to remove noise

22
Is this a valid Stack Overflow question, and if so how might I improve it so it can be re-opened?
19
How can I improve this post?
8
How should this poorly received question be improved?
23
Why does this question get a downvote? And how can I improve it?
13
What can I do to improve the question portion of a self-answered Android debugging tutorial?
7
How can I add focus to my closed question?
22
Why was this seemingly off-topic question about how to get an app rejected from the Apple App Store reopened?