Thank you to everyone who participated in Overhauling our community's closure reasons and guidance.

It appears that we have quite a few ideas about closure reasons we'd like to add as well as updating the wording for a few of the existing reasons. As mentioned in the previous post, we are currently using all 5 of our Community Specific Closure Reason slots.

In order to move forward with this process of revising our existing reasons and potentially add a new one, we first need to free up slots. I propose we retire our (2) specific off-topic closure reasons, specifically, Server Fault and Super User in favour of a more general one.

Please review some of the existing proposals:

There are more than a few different ideas about what the wording for this reason should be.

Reminder that there are 5 fields that need to be set for this new combined reason; each have a 500-character limit excluding the first which has a 100-character limit (from Catjia's answer to Should we update/clarify our help center with respect to other sites and teams?):

(#5 was changed in May to be shown to all users, instead of only users with the "cast close and reopen votes" privilege.)

You can review our current closure reasons with this SEDE query.

I've gone ahead and implemented this change.

The old close reasons specifically mentioning Super User and Server Fault have been deactivated, and this broader "Not about programming or software development" close reason has been added. I used the proposed guidance suggested in Henry Ecker's answer, with some very minor edits. (I'm glad I was able to help you phrase the usage guidance!)

I also moved the new close reason to the top of the list of community-specific close reasons, since that's where the previous two were. Hopefully this should ensure minimal disruption to people's workflows... :)

Please let me know if you encounter any technical issues caused by this change (or somehow find any typos in the text).

Now that this change has been implemented, y'all may also want to update the Question Close Reasons - Definitions and Guidance (proposed) guidance to account for these changes in SO's community-specific close reasons.

Personally, as much as I appreciate the idea of giving as detailed feedback as possible, I think giving lists of options is not the correct approach as:

For this reason, I'd prefer to have a general "not about programming or development" closure reason, and provide the general list of sites rather than trying to enumerate every possible location for every type of question. I've instead chosen to link to on-topic which already covers where to ask many types of questions. This practice is also consistent with our existing closure reasons and the closure reasons of many other communities network wide.

This is my proposal:

As I was working on this, I realised it was difficult for me to conceptualise what these reasons would feel like in situ, so I have created a mock closure dialogue and some mock close banners. 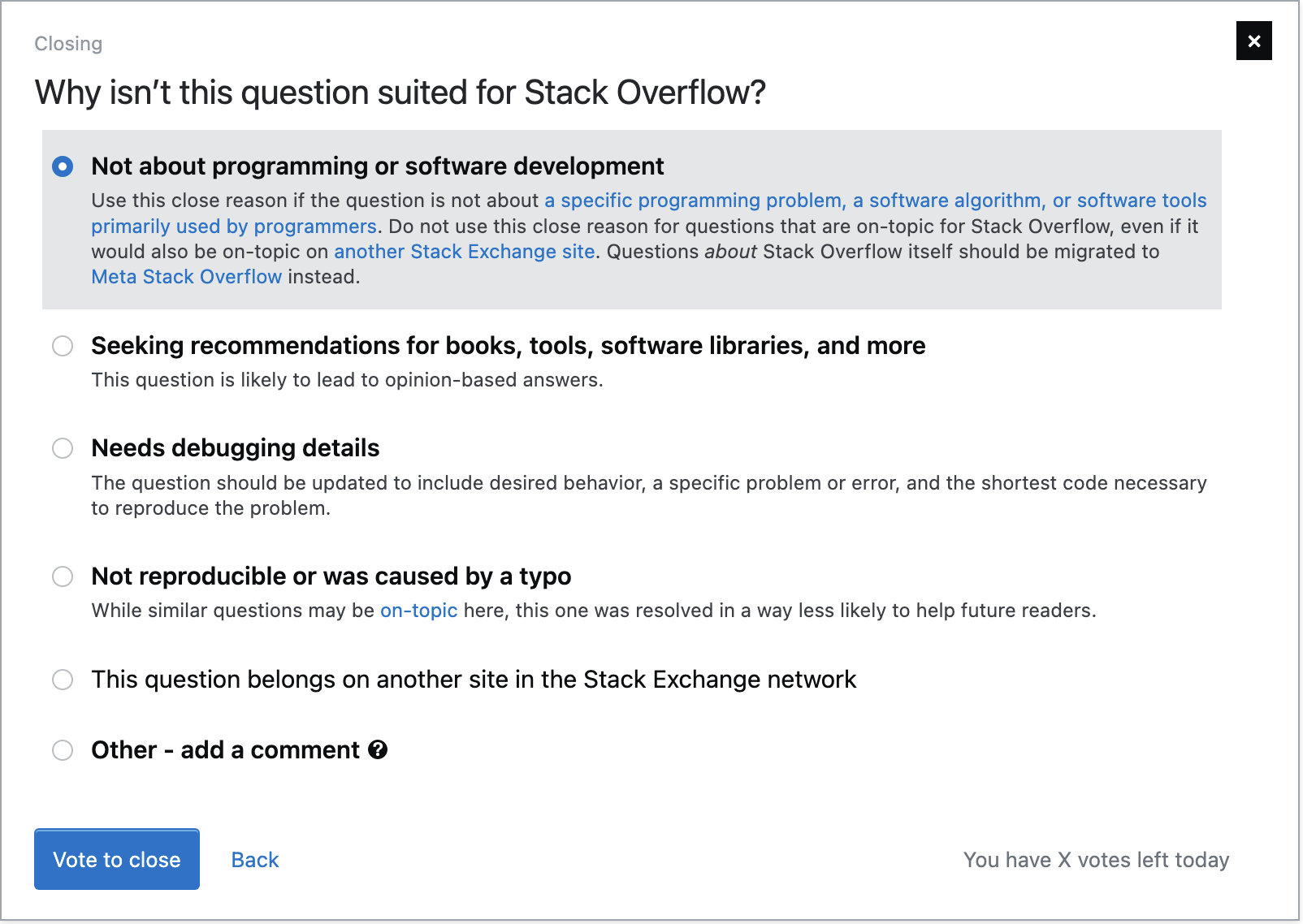 Privileged Users would see the following:

Anonymous Users and users with less than 3000 reputation would see the following:

This should be able to support the prior closure reasons as it represents the essence of why "general computing hardware and software" and "professional server or networking-related infrastructure administration" are off-topic.

It should also cover many of the custom close reasons currently being used. For Example:

1 Values were aggregated with the highly accurate and extremely technical method of "by hand" from question close stats. Custom closure reasons are considered distinct unless they match spelling and punctuation exactly so finding all variants and their associated amounts is non-trivial.

I would like to acknowledge that these reasons are the derived from many users network wide. My hope was to create reasons with guidance and links that were consistent with our existing reasons, help center, and MSO. I also pulled the current community-specific closure reasons for every community on the Stack Exchange network to see how they handle off-topic questions on their relative sites. My hope is not that this guidance is revolutionary or groundbreaking, but rather something that is familiar and can be easily adopted by our community.

This is my proposal which is exactly the same as Henry except that it is less ambiguous, more sober and more dry cut, trying to do less things at once:

Not the answer you're looking for? Browse other questions tagged discussion status-completed close-reasons custom-close-reasons .