When does one start to hit the 200 cap almost daily?

With a (now deleted) previous question I discovered that there are people hitting the 200 rep/day almost every day, or at least more often than not.

Is there a statistic as to what is the reputation after which such a trend sets off?

(To be more precise, I mean a statistic of the average reputation after which there’s a spike in, say, the number of upvotes received per week, or something similar.)

It varies massively. I hit the rep cap very-nearly-daily, and have done for several years, even if I'm not answering questions. Gordon Linoff has over twice as many answers as I have, but has not been regularly hitting the rep cap since he stopped posting regularly. (He's still getting rep, don't get me wrong - but not hitting the cap.) To be clear, this is in no way trying to make any claims about the quality of Gordon's answers - it's a reflection on the topics his answers cover.

Basically it depends on whether your old answers are still being found and voted on - and that depends on how search-friendly the questions are, and what topics they're on. (For example, I can easily imagine someone acquiring a large amount of reputation in a particular technology, then getting very little "on-going" reputation if that technology is superseded.)

The Stack Exchange Data Explorer doesn't have historic reputation events for users so it is hard to exactly answer your question with the public data we have. Nevertheless I had some fun to create a query that might give some insight in how each of these extraordinary users hit the daily cap.

Instead of trying to find the tipping point I focused on the almost daily bit. So I asked my self: What is the count of the number of days between subsequent daily rep caps. Without doing the full/accurate reputation calculation (just a ballpark figure only based on what is available in the Votes tables)

Based on this we confirm that Jon is a pretty consistent daily cap hitter, with not having a gap of over > 4 days not earning 200 rep.

We can see some runner-ups that are doing pretty well and these stats support the point Jon made in his answer as well.

Now we know the users and the dates they hit the cap we can for a single user zoom in on which posts bring them those reputation caps.

So this query shows for Jon Skeet the total votes received on rep-capped days and on how many days that post got a vote, aka it did contribute to the reaching the reputation cap. 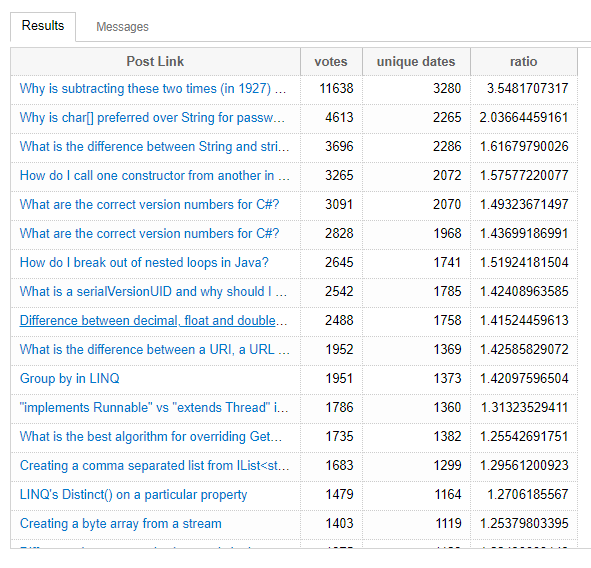 There are clearly posts that contribute multiple times on a single day to Jons' reputation cap days. 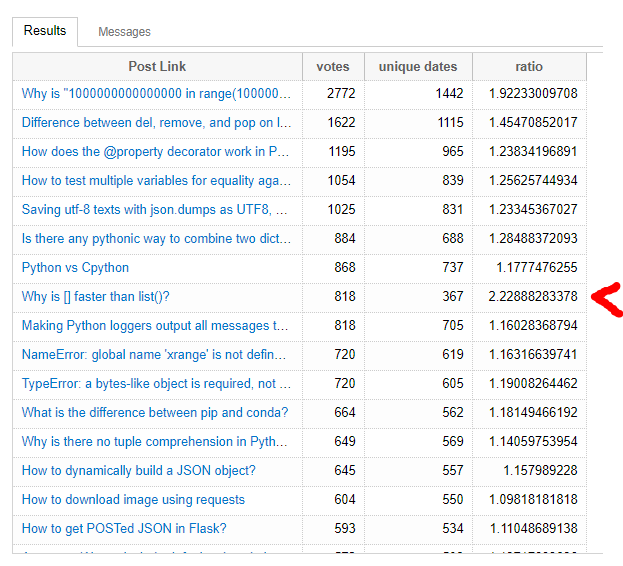 Notice how Martijn has a promising post to help him hit the cap more regularly.

Finally let see what the stats for Gordon Linoff, an epic reputation collector though not by means of reaching the reputation as regularly as Jon or the others, looks like: 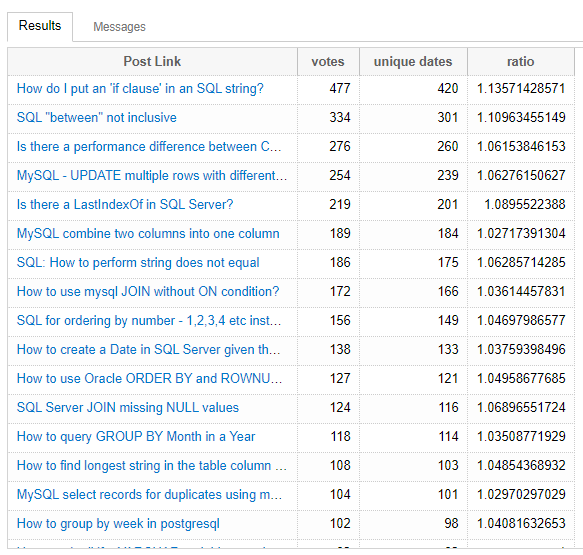 The lower ratio is the sign that he lacks a post that leverages a consistent / guaranteed contribution to his daily reputation cap.

Now I leave it to others to analyze these example posts and draw conclusions from them.