Why is this an audit?

I just failed the following audit: 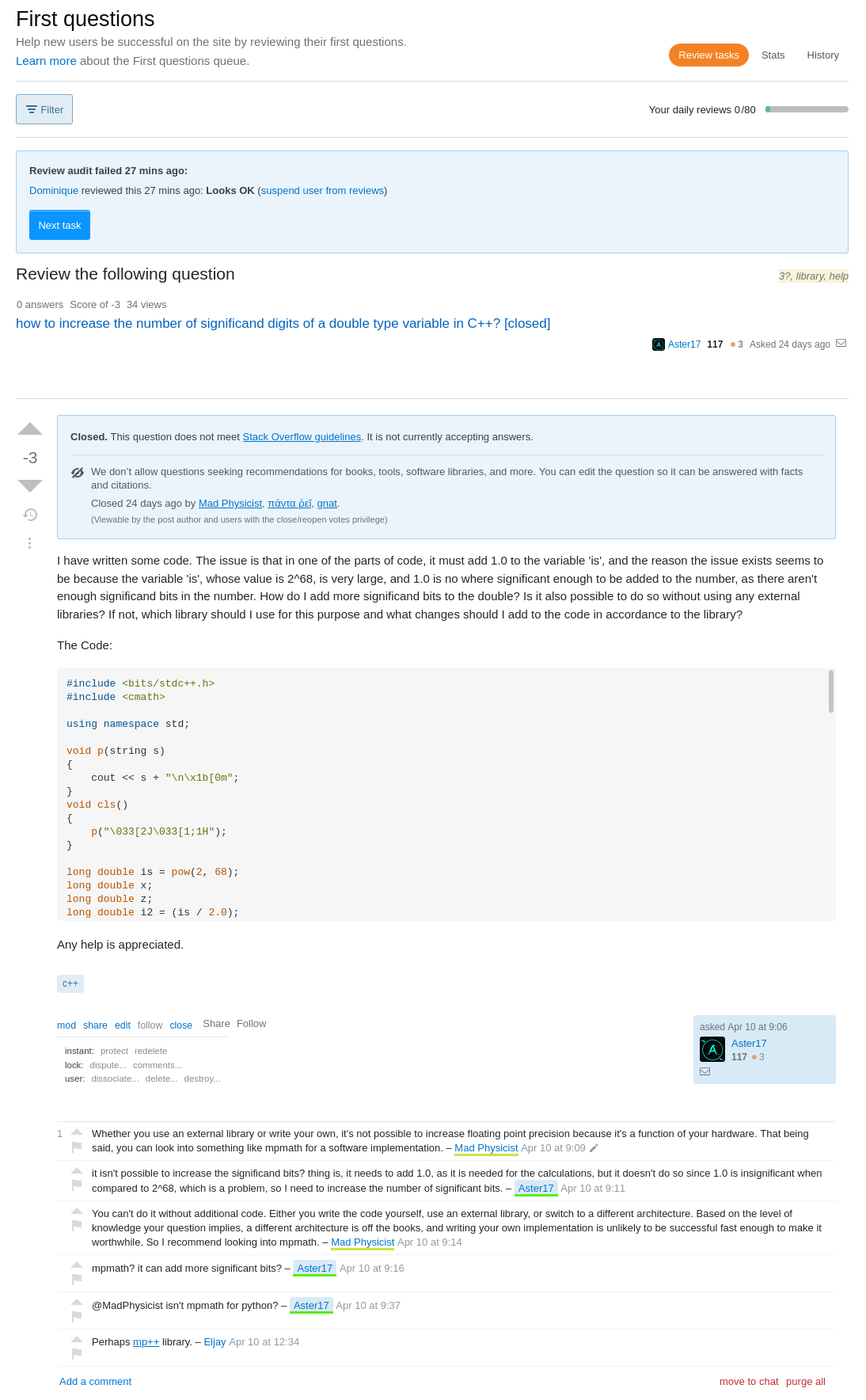 It looks like a question of a person who wants to add a normal number to a very large one, so it looks like an innocent question to me at first. Please subtract this from my "wrong-audit" list.

"Why is this an audit?" - because it is closed. It is as simple as that.

You can disagree with the closure, but that does not immediately imply the audit failure was wrong because you may simply be wrong yourself.

That being said, I personally disagree with the closure reason. But I understand it happened. this is asked in a rambling manner. "How to fix this? Can it be done without libraries? If not which library do I need?" - ramble ramble, those are two superfluous followup questions that depend on the answer of the previous ones to even be relevant or not and one of them happens to be the "asking for offsite resources" hip fire trigger that is pretty much guaranteed to see your question closed.

That superfluous off-topic question is very obvious though so next time you should smell an audit when you see something like that. It may be innocent, it does not read innocent.

While the title of your question has already been addressed, I'm compelled to remark to this statement:

It looks like a question of a person who wants to add a normal number to a very large one, so it looks like an innocent question to me at first.

This is why audits exist. You are required to take a close look at every question that comes through this queue - y'know, spend maybe more than 30 seconds on it - and really make a determination.

The main thrust of the question, sans code, is below.

I have written some code. The issue is that in one of the parts of code, it must add 1.0 to the variable 'is', and the reason the issue exists seems to be because the variable 'is', whose value is 2^68, is very large, and 1.0 is no where significant enough to be added to the number, as there aren't enough significand bits in the number. How do I add more significand bits to the double? Is it also possible to do so without using any external libraries? If not, which library should I use for this purpose and what changes should I add to the code in accordance to the library?

The issue is here:

How do I add more significand bits to the double? Is it also possible to do so without using any external libraries? If not, which library should I use for this purpose and what changes should I add to the code in accordance to the library?

Notwithstanding that there's multiple questions in this, the main thrust of the question is figuring out how to add two large numbers together. That by itself is an OK question to ask, but it's probably a dupe somewhere. The real tricky part is this asking for a library part, which to be honest, could...just be edited out of the question. That keeps it on-topic. If someone in an answer suggests a library, that's not nearly as egregious as someone expecting a library from an outcome of this.

But all of these actions here are explicitly not saying that the question "looks good", which is all the audit can really check for. Had you done anything else, you would not have failed the audit.

Audits are designed to make sure you're paying attention. I can't in good faith suggest that you were if I were able to find these things to improve in the question with a cursory look at it.

18
Will an edit fail a First Questions review audit?

8
Failed an audit, why is this spam?
6
Failed audit on First Post question even though I made a good comment on it
23
Was this audit wrong or am I missing something?