I've looked for existing questions along this line, but the only one I've found is this Stack Exchange Meta post, which seems to be asking a similar question, but is from a decade ago, so I don't know that anything it says is relevant here, or anymore.

Shortly before 1 AM GMT (midnight UTC), I was sitting at 979 reputation.[1] I went away, read/slept, whatever. At 10 am GMT, 9 hours later, I went to check my notifications on Stack Overflow, and saw something about a vote reversal. It seems someone upvoted a bunch of my answers during the night—so that I reached ~1,150, the algorithm caught it, and the reputation has been subsequently removed.

All of this is fine; I understand the purpose of the algorithm for checking this, and why the reputation is removed.

What I don't get, is why it is displayed as an actual loss of reputation in my reputation graph: 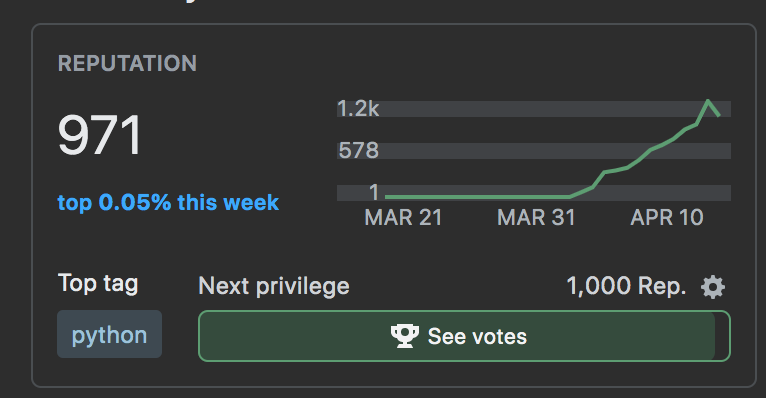 (Yes, my reputation for 9 April exceeds the maximum—I got a bounty.)

I don't know if this is what also happens with reputation 'lost' from posts that are removed because when this has happened to me it's been overshadowed by my daily gains. That is a different discussion, though.

My question has three parts:

In the grand scheme of things, it doesn't matter, but now these graphs look like I went off the rails today. You also can't hide reputation losses due to vote reversals. And both graphs, exactly as shown above, are visible to me when I am not logged in to my account, so they are also visible to anyone else.

[1]: I know this because I have been making a concerted effort to build my reputation here, recently.

They may not be your actions, but they were applied to posts you own, so they affected your reputation. Thus, your reputation balance increased and decreased. Why wouldn't this be shown on your page? If you were expecting it to show neither an increase or decrease, then you are thinking of what is called a "reputation recalculation". This is separate from a reputation/voting reversal (which just counteracts the vote action after the initial action has been stored permanently in the database); recalculations are very expensive and are only done for rare events (like when question upvotes changed from being worth 5 reputation to 10 reputation)... a recalculation would make it as if the change never happened.

I haven't read the post you reference, but this is is the same as your 3rd question, which I will answer below:

In the grand scheme of things, it doesn't matter, but now these graphs look like I went off the rails today. You also can't hide reputation losses due to vote reversals. And both graphs, exactly as shown above, are visible to me when I am not logged in to my account, so they are also visible to anyone else.

You are right, this does not matter. Your reputation decreases when you downvote an answer or give a bounty, or when someone downvotes a post of yours, and sometimes when a post of yours is deleted (depending on its age and score). These are not bad or demeaning events... just like I expect you are not ashamed when your bank account balance decreases by several dollars when you purchase a cup of coffee at a cafe. Your bank account balance is just a ledger of transactions, like your rep history. If you continue contributing to the site in earnest, your reputation will still grow over time and even a 50-point drop of reputation at once will look like an insignificant blip after a few years.

192
"Serial upvoting reversed" makes reputation suspect for employers
33
Serial voting reversal does not reverse the votes, just the reputation. Why not?