Is the new editor's inline code tool supposed to break up code blocks? 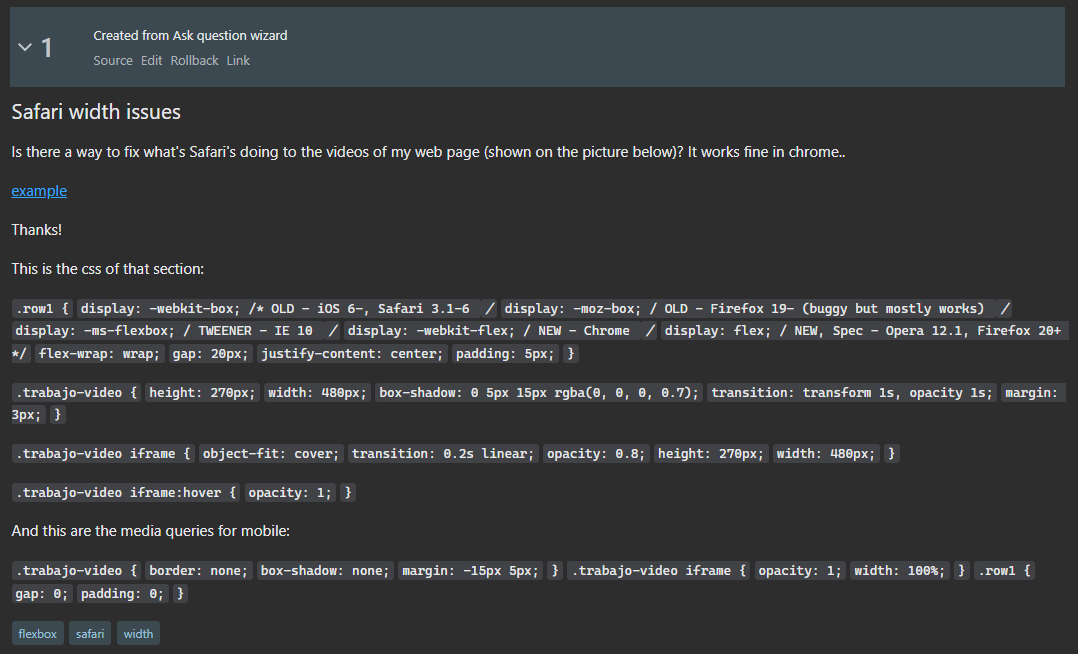 However, I just came across another question in the new questions queue with the same problem: a series of seemingly related lines of code broken into individual, inline code blocks. 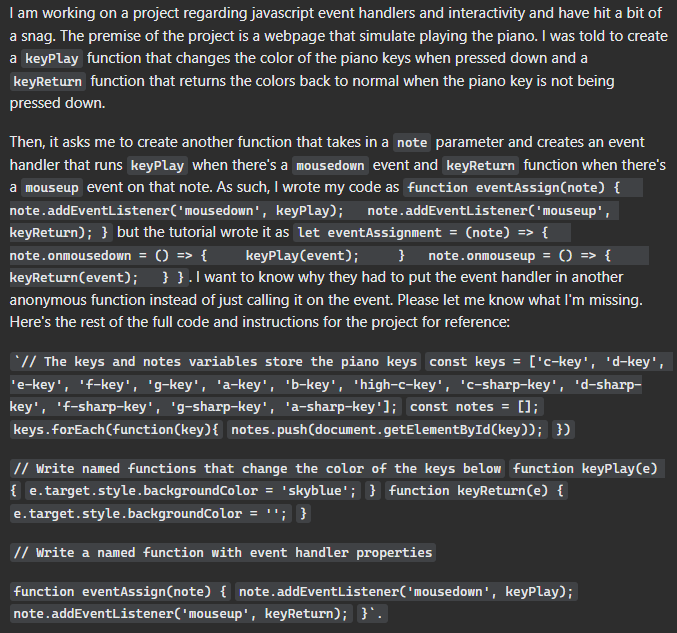 It occurred to me that this could be the result of the new Ask Wizard and, after checking the edit history on the first post mentioned above, I can see that the wizard was indeed used to draft the question.

Sebastian Simon points out that the wizard itself is not the cause; it is exposing new users to the new editor. There may be similar issues logged with code (and formatting in general) when the new editor is in "Rich Text" mode (Markdown off).

wjandrea points out that you can check if the draft of the post was created with the Ask Wizard by checking the timeline when the edit history is not otherwise visible on the post.

1. Copying the code, then applying the "Inline Code" tool.

This approach handled inlining as I expected, though I did note that the tool did not account for the existing backticks (`) in my code when deciding how many backticks to surround my code with. This will cause formatting issues that a new asker may not know about until they review their question for posting.

2. Clicking the "Inline Code" tool, then pasting my code into the selection area.

This approach yielded the same results as the first test.

3. Turning off the "Markdown" toggle, then pasting my code.

Interestingly, this appears to have correctly created a fenced code block. Again, I would have to continue to review the question to be sure, but it certainly renders as one in the editor.

4. Pasting my code, then turning off the "Markdown" toggle, then using the "Inline Code" tool.

After using the "Inline Code" twice (once to remove the inline block created by my interpolated string and a second time to create an inline block from my code), I recreated the issue. Each line was wrapped in its own inline code block.

If my code would not have had backticks in it, the first application of the "Inline Code" tool would have caused this outcome.

I'm not sure what the best approach would be here because I am both:

It's odd to me that the "Inline Code" tool isn't simply wrapping each line in an inline code block. It looks like it's trying to parse the code into statements and wrapping each statement it finds. I don't know if that means the editor could be tweaked to generate a fenced code block when multiple lines/statements are detected (though the name of the tool would need to be adjusted too).

I'm not even sure if this is a real issue since the "Markdown" toggle must be off. Maybe I'm missing some of the cases and considerations that went into the editor's behavior when the input isn't considered markdown.

So is this something that should be addressed? If so, how?

tl;dr I've filed a feature enhancement on the Stacks-Editor repo to address this UX issue.

Technically speaking, this is working "as expected". A user is posting text into the editor's markdown mode that contains "special characters" in it, then submitting that text without adding the correct Commonmark syntax to mark it as code. In your specific example, those characters are the left/right square brackets (used in e.g. links, but the syntax here is invalid), right angle bracket (e.g. blockquotes, also invalid) and backticks (code spans, valid markdown). When this text is parsed later (either by rich-text mode or the server-side Commonmark renderer), these special characters are treated as such, with the parser attempting to tokenize and render them as-is. You would see this same behavior no matter what Commonmark renderer you use. In the case of rich-text mode, when the internal representation is serialized back to Commonmark, all special characters in text nodes are escaped, which is why you may see a bunch of extra escape characters in the submitted text.

What this means is that this isn't a bug, but user error (see: "you're holding it wrong"). That being said, we can improve the experience here a bit. In rich-text mode, we look at the pasted text to try and identify it as code. If it is successfully detected as code, we wrap the text in a code_block node. We could do something similar for Commonmark mode, where if the pasted text is detected as code, we wrap it in a code fence.

I've filed a feature enhancement against our open source GitHub repo and prioritized it to be included in the beta release. The request contains a full description of the proposed solution, as well as a short analysis of the benefits and drawbacks of this implementation.

Not the answer you're looking for? Browse other questions tagged bug status-completed code-formatting stacks-editor .

168
Could Stack Overflow support GitHub flavored markdown?
15
Disabling new editor in our Teams site
6
How to manually specify language of a fenced code block in Teams?
46
Disable the Stacks editor in the new Ask Wizard