What is the point of showing the "sorted by" options when there is only 1 answer?

What is the point of showing the "sorted by" options when there is only 1 answer? 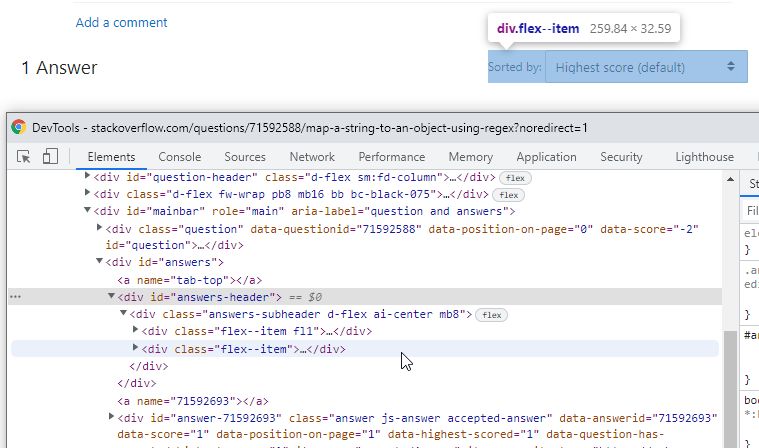 The sorting options are shown persistently, even when there is only one answer, for a couple of reasons.

First, it simplifies the logic required in the code, eliminating the need to check for and handle a bunch of different conditions. Not only does this make the code easier to write and reason about, but, more importantly, it makes it easier to test, because there are fewer different permutations that need to be tested. Less code with simpler logic is, in general, preferred, in absence of compelling evidence or reasons otherwise, as code that doesn't exist cannot have bugs in it.

Second, it maintains a consistent, common user interface. This not only helps with usability (e.g., muscle memory), but it also helps with user education: teaching users about how the site works as they go about using it.

Third, your chosen sort order is persistent, meaning that it sticks across questions. In other words, it doesn't apply just to the page you're looking at; it is saved as a preference for your account. Even if there's only one answer on the question you happen to be looking at, you should still have the ability to change your sort-order preference.

Fourth, and perhaps a bit flippantly, set theory says that a set of one is still a set. :-)

I am not a developer on the Stack Overflow platform, but there may well be a fifth reason: pages on this site support "live update/refresh", such that if an additional answer was posted while you were on the page, then it would immediately appear. If the sort options were not always present, then this "live update/refresh" logic would have to be further expanded to check whether the sort widget was already visible and, if not, show it. Besides the fact that that introduces an extra step which may have performance implications, adding new elements to the DOM after the page has been loaded/rendered can be disorienting, causing things to jump around on the screen for the user.

Having the sort options visible when there is only one answer doesn't cause any problems (it can't, for example, cause the answer to disappear, or cause unrelated answers to appear), so why shouldn't it be there?

I have created a userscript that removes the sorting when only one answer is visible. Find it on StackApps.

I personally do not like an UI element to conditionally be shown. However, if others prefer it that way, this is very easy to address as an option, hence why I created the userscript.

Not the answer you're looking for? Browse other questions tagged discussion answers design sorting .

43
What happens when someone edits your answer to the point where you can't even recognize it?
21
What to do when the accepted answer is a link-only answer?
7
In a search query, what are the possibilities to sort the results?
3
What is the tag [cmakelists-options] about?
4
The options showing after choosing needs improvement in the triage queue
5
Is there a userscript to sort answers?