I checked the guide, and I asked my question (How can I use Expect to automate an AWS job?), but it seems that my question still isn't good enough.

I appreciate that it might be a difficult question to answer - or that maybe someone could take exception to what I'm trying to do - but it's still something that I need. If I didn't word my question well, or if I failed to do / consider something important then I'd really like understand what it is so that I can improve not only this question, but others that I ask in the future.

First off, one issue I have is reading a history of how you got to this solution. It's generally not interesting. It feels to me like searching for a recipe, and getting a story about the author's family the first time they tried the recipe before I see the recipe. Maybe some people like the extra background, but on a site like Stack Overflow, it muddies the water. On Stack Overflow, I want to see questions, and details on what's not working, not much more.

Then there's the code: 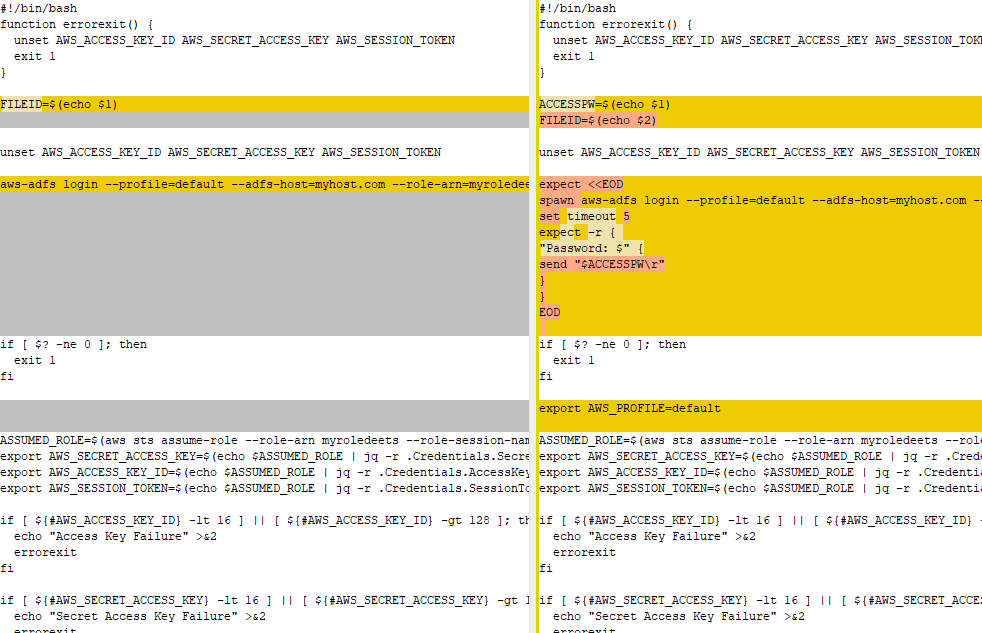 You have two large code blocks that are mostly the same. To my mind, showing a history of the code as it evolved doesn't help. It's never a good sign when I need to open a diff tool to understand what's going on in a question. To the contrary, all of this code makes it harder to understand what the question's about. If you do need to point out the added bit in a block of code, a comment like # This is the bit I added that broke foo is enough. Viewing code history is useful if I'm trying to understand why a line was added, not helpful in understanding what it's doing.

This shows the second major issue: One of the comments you'll see added to posts a lot is "Please post a minimal reproducible example". This is for two big reasons: It helps anyone trying to answer your question, and more importantly, it helps the question asker! Often the effort of creating a small example to reproduce an example will lead to the discovery of the issue itself. It's a useful debugging technique on its own.

I'd expect this question to be a fairly simple subset of the script that calls aws-adfs using expect, and perhaps one line to verify the call worked correctly. Anything else just ends up confusing possible helpers. This is, of course, a bit of an art form. If you had just posted an expect script without clues as to what it's calling, it might not be enough to help you, but at the same time, the code you have below the call to aws sts assume-role doesn't add anything.

And, on top of all of this, expect has a fairly rich debug mode. What does that show? I expect (no pun intended) question answers to use debuggers available to them first, and expect is no different. I very much expect (ok, that one was deliberate) that if you had run your script with expect -d, you would have seen the core issue here, or at least had something to add to the question that would have no doubt been obvious to anyone familiar with expect.

Finally, on a technical side, there are a few things that sour me in this post:

Other than the bit about passing in credentials to aws-adfs, these issues aren't helpful for your question. They just leave a bad taste in my mouth, and I'm less likely to answer questions with piles of messy code, since for better or worse, I've found it leads to a rabbit hole of follow up questions.

22
Is this a valid Stack Overflow question, and if so how might I improve it so it can be re-opened?
36
Wondering why this question was down-voted so many times, and how I can improve it
1
How to improve my question style (based on a real example)?
11
Apparently awful question — how do I improve it?
19
How can I improve my poorly-received questions?