I recently encountered a question that was deleted by a moderator before they became a moderator. I don't agree that that particular question should have been deleted. However, when I went to vote to undelete, it wouldn't let me because a moderator had deleted the post. 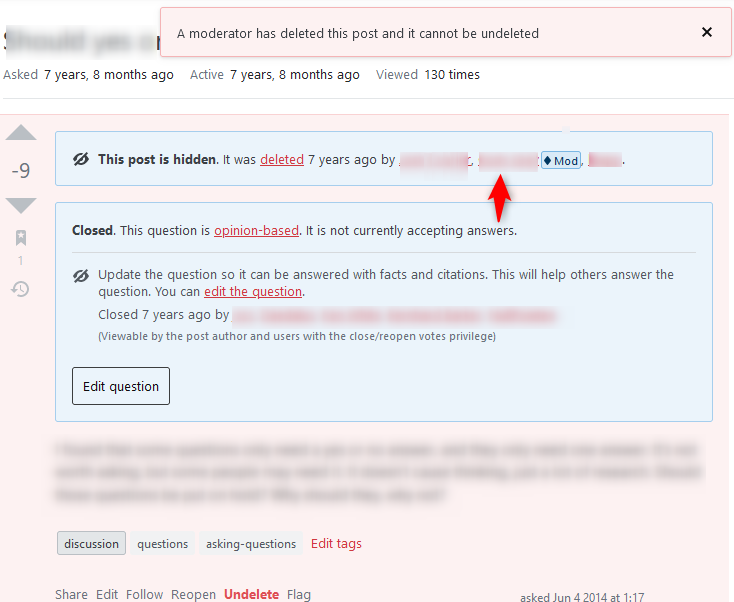 As the image shows, the diamond was actually the second of three close voters (meaning that the moderator didn't cast a binding delete vote in this instance and the vote was cast before they were a moderator).

Is this intended behavior? If so, is it correct?

Also, I haven't found any examples to test this out on, but is the converse true too (that posts deleted by former moderators while they were moderators can be undeleted now)? Does the inability to undelete apply to exactly the case where one or more of the delete voters is a current moderator (regardless of whether they were a moderator at the time that the vote was cast)?

This is currently by-design. We do not store any sort of "IsModerator" flag with deletions to indicate that it was mod-deleted and should be prevented from regular undeletion. The code just looks at all the currently applicable deletion votes and determines if one of them currently has a diamond. This has the side-effect of applying the prevention to all interactions before they became a moderator and (you guessed it) removing the restriction from all of their actions once they are no longer a moderator. Without such a flag being implemented, it is not possible to determine whether a user was a moderator at the time of deletion.

Personally, I support getting rid of the restriction altogether rather than attempting to build onto this system even more. I don't think it is super useful, and moderators could always lock posts if they truly do not want to see it undeleted in the future.

Not the answer you're looking for? Browse other questions tagged bug status-bydesign moderators vote-to-undelete .

65
Is moderator retirement supposed to affect possibility of undeletion?
15
After I improve a moderator closed and deleted question, should I ask for it to be undeleted?
42
Why am I not allowed to vote to delete or undelete another user's post more than once? [Obsolete]