If I am flagging several, say ten, comments on a post as "No longer needed," do moderators prefer them to be flagged in any particular order?

Does it make any difference for moderators as to how easy they are to process?

And if there are two or more intertwined comment sequences, is there a preference for them to be flagged as if by thread?

The order is completely irrelevant.

I just checked for good measure, and regardless of the order you flag the comments in, provided they're on the same post, they appear in order of when they were posted, not in the order in which they were flagged.

The only time the comment mod tools discriminate based on when the flag was raised is when sorting relative to other posts with the same amount of comment flags. Basically, the mod tools sort posts overall by the amount of comments flagged first, and flag order second. There's some more finicky details on the actual sorting system that I won't bore you with, but that's the two main sorting rules.

In either case, post sorting doesn't affect comment sorting. This means you won't be able to provide context by flag order on comments within the same post, so feel free to flag in whatever order you see fit. It's all the same in the mod tools.

It's also all just a long list of comments anyway. Here's a screenshot, with actual details removed, in case you're interested (the button colors are non-standard, for the record): 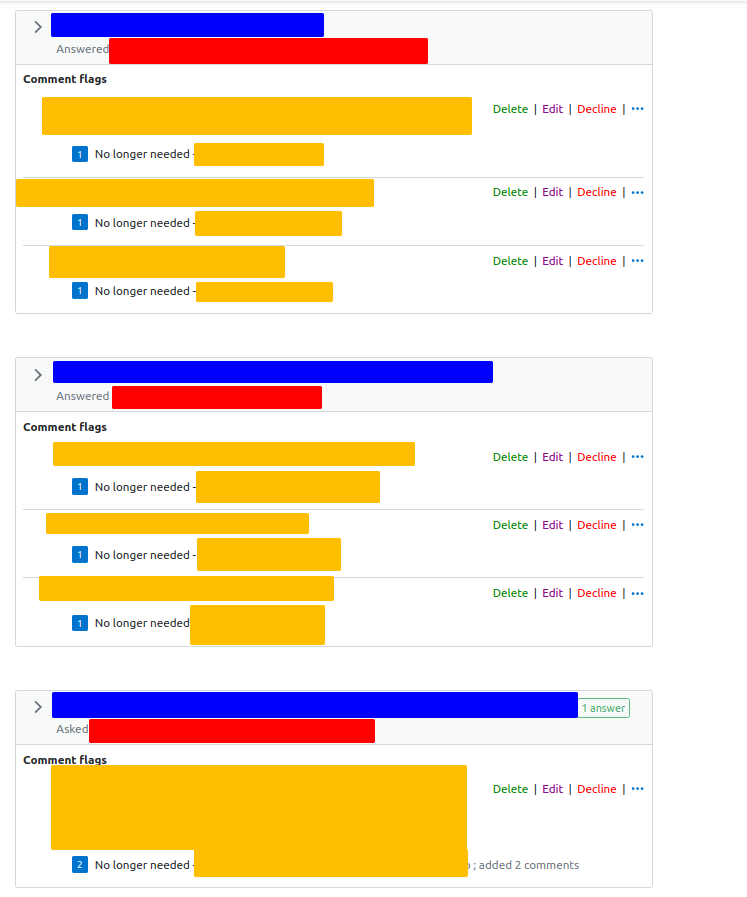 69
What is the correct procedure for handling large amounts of trashy comments on a post?

13
Question Downvote/Flag Notification
2
Flag on answer with multiple issues (mainly long comment thread) declined
19
When a user's content gets flagged, does it leave a trail?
10
Why was my "purge comments" flag declined?
82
Could high-rep users help with clearing comment flags?
1
What about these two flags and what is the maximum limit of a flag could remain pending?
42
Flagging upvoted but obsolete comments
30
Mods apparently could not see my deleted comment when reviewing my flag-- why?