Something I've noticed when editing the first posts for a lot of people is that many people use the 3 backticks method to enclose a code block that they copy and paste in.

Since the first line is supposed to be for syntax highlighting, if there isn't a newline between the backticks and the first line of code, it gets swallowed. For example, this code :

The examples in https://stackoverflow.com/help/formatting clearly show that you are supposed to have newlines, but for a new user copying and pasting their code, this might not come across.

So I guess my questions are :

This isn't a problem that we would like the team to spend development time on in the next 6 to 8 weeks.

As the preview behaves correctly, the OP has plenty of opportunity to notice and rectify their mishap. 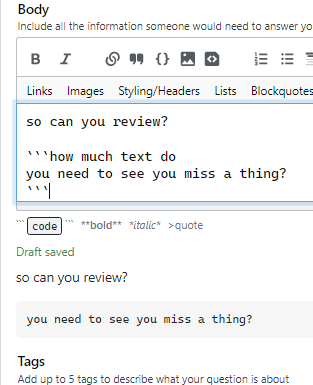 I don't think we need more tooling to make life easier of those that are so much in a hurry that they don't spot missing relevant bits and pieces from code they could dream by now.

I would rather see development time being spent on fixing some difficult to parse / diagnose errors in the review phase, like the infamous It looks like your post is mostly code