Should this zero-score, not NAA, deleted answer be used as a Low quality answers audit?

I came across a Low quality answers audit yesterday on this answer to Biopython: Local alignment between DNA sequences doesn't find optimal alignment yesterday - screenshot for users with < 10k reputation: 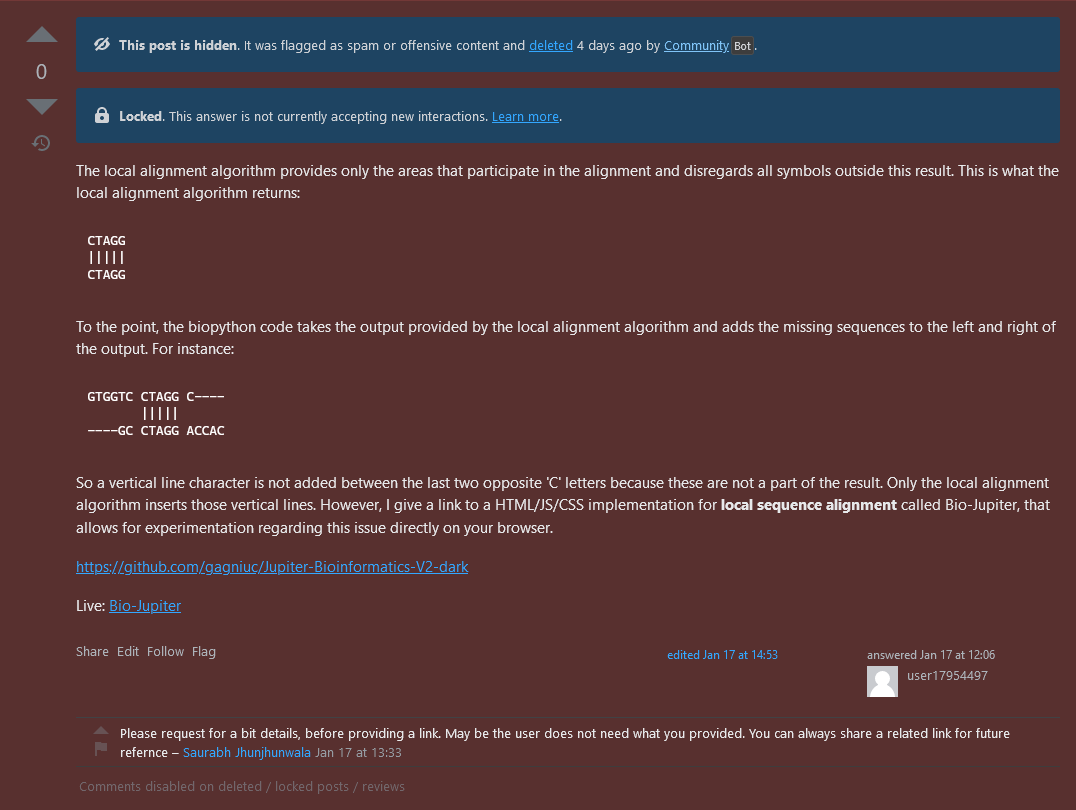 I realised that it was an audit because (unless the answer is obviously NAA, like "I have this problem too!" answers) I always click through to see posts in context when doing reviews, and the answer was not shown below the question, so I passed the audit by choosing the "recommend deletion" option.

The only conclusion that I could then draw was that the user (which was displayed as "user17954497") had been deleted for spam - see, e.g. this question) where Samuel Liew said:

A side effect of a user getting deleted for spam is that all their negative-scored posts are also spam-deleted.

From this position I decided to raise a custom moderator flag on the answer to hopefully prevent others from encountering this audit (I've done this in the past and it's resulted in my flag(s) being marked helpful):

This appears to be a bad audit - the answer appears to be an honest attempt to edit the question, and the only two links are to GitHub (and don't seem to be critical to the answer) so less likely to be spam. It looks to me (not having 10k reputation) that the user might have been spam-deleted for posting loads of links to their own repo (or actual spam).

My flag was declined about three hours after it was raised with the standard comment:

I can't see that the blunder in my flag text (I had meant to say "attempt to answer the question") would be the reason that the flag was declined - in the context of the rest of the text, I'd have thought it was otherwise clear.

In retrospect, the comment on the answer indicates that the answerer might have just posted a link to their repository, but the answer was edited just over an hour later (presumably to provide more information, and to possibly not make it a link-only answer).

Was the answer a good audit for the Low quality answers review queue?

If not, why was my flag declined?

After this question was asked, I encountered another audit for a deleted answer by the same user for an answer on another question (screenshot for users with <10k reputation). As always, I clicked the link to see the answer in context and didn't see it, so passed the audit. This time, the deleted answer had a score of 1 and had a comment from the OP. Again, the answer was "flagged as spam or offensive content" and deleted.

As the answer is linking to the same GitHub account (gagniuc), and refers to a book by "Paul A. Gagniuc", it seems plausible that the author of the book and the owner of the GitHub user account are the same person - presumably the same person behind the deleted Stack Overflow account. If so, this answer would appear to count as undisclosed affiliation.

In this case, a beady-eyed reviewer would spot that the referenced book and the GitHub account contain the same name, and might have searched for plagiarism by doing a search (e.g. for "INFORMATION CONTENT (SELF-SEQUENCE ALIGNMENT)") and found that the code appeared to be copy/pasta from the book - the relevant page in Google Books here. The code is copied without making it clear that it's been copied so its presence in the answer would either be plagiarism or undisclosed affiliation.

0
Review audit: Low quality answer seems acceptable for me
36
Should I find the creator of every library that is shared by SO users in the review?
7
Should this (partial) answer be an audit in the Low Quality Posts Review Queue?
5
Weird audit in LQA