The number of helpful flags has disappeared

I have noticed today that the number of helpful flags in a user's profile is no longer shown. I can see it on my own profile, but I can't see it on other user's profiles. 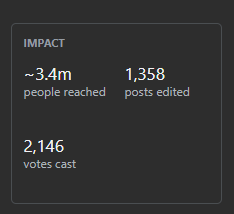 This was the only place this information was available. It's not available via API or on any other page in the user activity tab.

The number of helpful flags was placed behind a conditional that only showed it if you were viewing your own profile and/or are a moderator. For what it's worth, this was unintentional. There were many nested conditionals in the Activity view and the display of this specific stat was lost in the refactor shuffle.

We've shipped out a fix to this, so helpful flags are visible to everyone once again. Thanks for reporting the bug!

I can only assume this was intentional, so I have to argue that it should be put back, on every site.

Most of the time the count provides just a little bit of insight to what users are doing, to see if they're active in moderating the site. For some users (namely association bonus users) this may be their only type of activity on the site, while some high rep users may never participate in flagging at all.

But there's one really important role it plays. Helpful flag count is really important during a moderator election. It shows how much effort each user puts into successfully moderating the site, and even other sites — every helpful flag should count for something. (It also shows how many fewer flags the other moderators would have to handle if the user is elected and can only cast binding flags!) While this is something that could be revealed during one of the election phases (and someone would of course have to spend the time doing so), that won't be enough. This information should be available before the election even starts, so that people can judge if they're casting enough helpful flags or not compared to other users to even be a good choice for moderator.

Not the answer you're looking for? Browse other questions tagged bug status-completed profile-page .

11
Flag summary sort by active disputed helpful declined etc
53
What happened to the gear icon in the reputation box of my profile?
7
Visiting the Developer Story Preferences tab makes the story tab visible, even if I never touch the checkbox
29
Years missing in the "all actions" tab of the profile
37
Broken user profiles, only on Stack Overflow
9
Suspended users can make invisible comments on Collectives articles