I recently ran into a question with the [three.js] tag that asked for help with a 3D globe randomly disappearing. This question had a link to a working demo with the problem, and the code showing the relevant segment. Links to working demos are allowed, and even encouraged in the how-to-ask page:

If it is possible to create a live example of the problem that you can link to (for example, on http://sqlfiddle.com/ or http://jsbin.com/) then do so - but also copy the code into the question itself.

As far as I can tell this question did exactly that. The link shows the 3D globe that disappears, effectively demonstrating the problem. However, the edit history (screenshot below) shows that the link was removed multiple times without explanation. The OP attempted to add it back, only for it to be removed again: 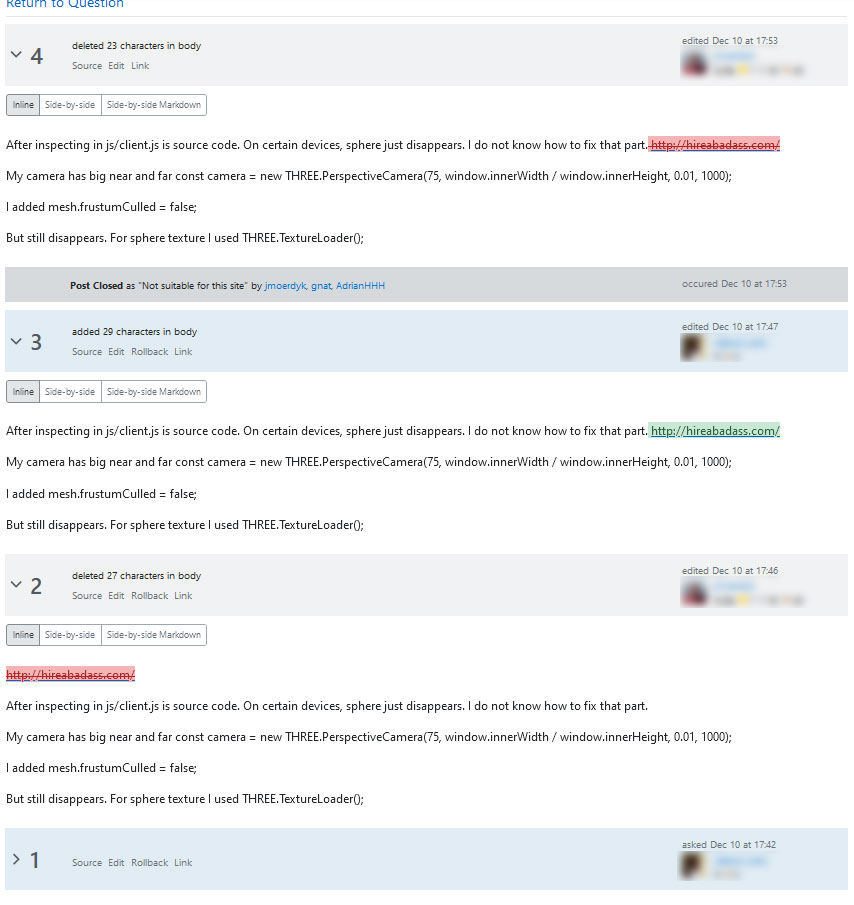 My question is, what is considered "promotional content"? The link was hireabadass.com, which isn't a business or spam, it's literally just a demo of the 3D globe referenced in the original question. I understand it could sound like a recruiting service, but immediately after opening it's evident that's not the case. How can this account be suspended for 7 days for promotional content, when it was just following the "live example you can link to" suggestion?

The question does not appear to be spam. I've removed the suspension.

Thank you for bringing this situation to my attention. I'm the moderator who issued the suspension. In retrospect, I was too hasty in classifying the user's recent posts as spam. I've removed the suspension and apologized directly to them in a moderator message.

In this case, I didn't go to the link. I saw a domain name which looked a lot like the typical "hire someone through us" spam domains we routinely see. The user had two questions, Q1, Q2, both primarily containing the link, which were posted within several hours of each other with both questions being at the quality level we typically see for that type of spam. The content of the posts didn't directly address the reason for the site being linked, although it is implied (which we also see in a lot of spam). So, those posts looked an awful lot like spam. At the time, I didn't have a sandboxed, VPN'ed system available in order to test a probable spam link, so I didn't actually visit the link. I should have, however, considered that it might be a user engaging in another type of behavior which isn't permitted (deleting and reposting a question).

As to the question you linked, it appears to be a repost of the user's initial question on the subject, which they deleted after it was downvoted and correctly closed. Users are not permitted to avoid moderation actions by deleting and reposting the same question. Doing that is something for which we have a different stock moderator message, which would have been the more appropriate message to send in this case.

Users have the ability to respond to moderator messages/suspensions. Explaining a mistaken situation is one of the a major reasons that ability exists.

If the user felt the suspension was incorrect, then they could have and should have responded to the moderator message that goes along with any suspension. In their response they should have rationally explained that they felt the situation wasn't as described in the moderator message and that they request the suspension be reevaluated. If they had done so, I would have been notified with an inbox entry, which I would have read and investigated further. That does not, however, absolve me from the responsibility to have better evaluated the situation. It's just a way that was available for the user to quickly resolve any confusion.

Raising a custom flag, as you did, was the right way for you to bring the situation to moderator attention.

I did not handle your flag, so I can't tell you why the situation wasn't resolved when your flag was processed. Your flag does, however, appear sufficiently detailed. I have not yet conferred with the moderator who handled your flag.

A diamond mod could come along and refine these a bit later on, but that's the gist.

A better way to frame the discussion would be to ask, "What is the point of this person putting a link in the question that goes somewhere?" We explicitly like to discourage code on external sites as much as possible - even the archaic recommendation for fiddles is frowned upon, since if the fiddle goes down and Stack Overflow remains up, you don't really have your example code anymore to ask a question or share your answer with.

A relevant takeaway is that we still expect code as a part of the question, even if you link externally.

If it is possible to create a live example of the problem that you can link to (for example, on http://sqlfiddle.com/ or http://jsbin.com/) then do so - but also copy the code into the question itself. Not everyone can access external sites, and the links may break over time. Use Stack Snippets to make a live demo of inline JavaScript / HTML / CSS.

56
What is the exact definition of "spam" for Stack Overflow?
20
Add StackSnippets to the how-to-ask page?
2
Is Dropbox appropriate for hosting a live demo in a post?
4
First post review
72
Why was I suspended?
2
Is there anything wrong with posting example code in my question?