After adding a few code blocks, the about me section on my profile page just overflowed the page horizontally. 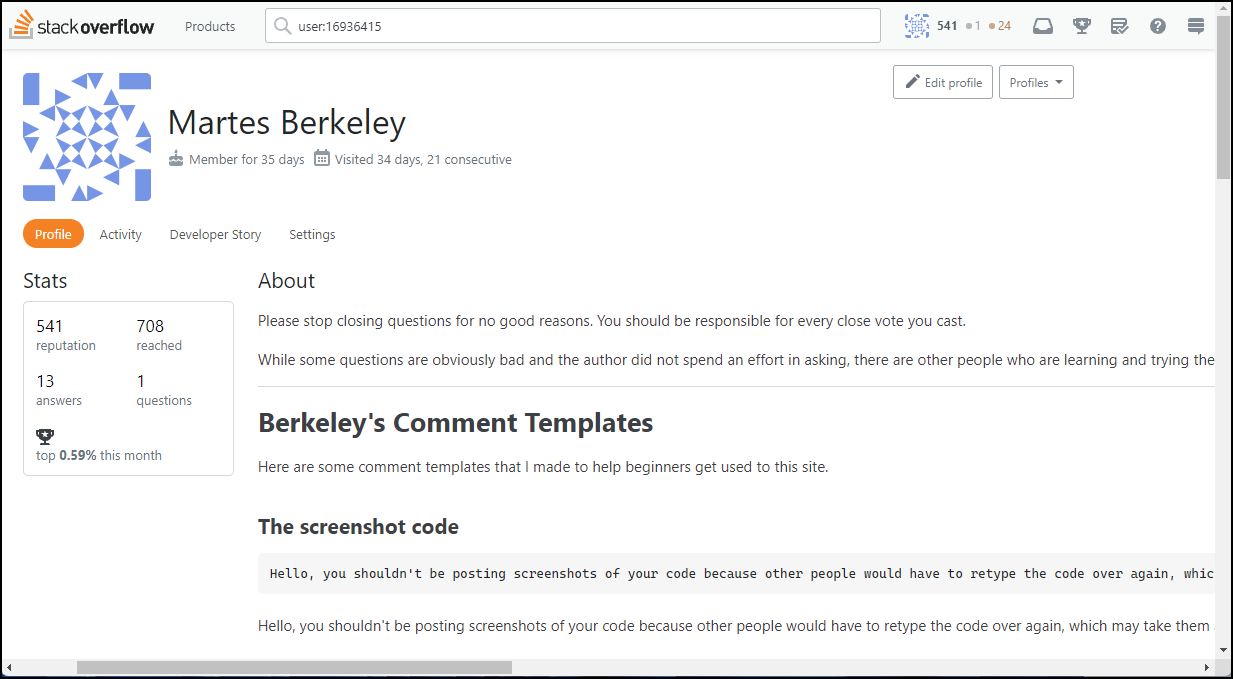 There are supposed to be scrollbars on the code blocks and not on the page itself.

I don't know whether other people can see this bug or not. Here are some details to reproduce the bug.

This issue has been fixed. The problem was due to a way that pre tags interact with flexibly sized containers (a css grid column in this case). Since I probably can't explain it well enough, here is an article that does.

From the linked article:

I can’t promise I’m explaining this 100% accurately, but the way I understand it, the minimum width of a grid column is auto. [...] And since auto is entirely based on content, we can say it is “indefinitely” sized, its dimensions flex. If we were to put an explicit width on the column, like 50% or 400px, then we would say it is “definitely” sized. To apply our fix, we need to make sure that there is the column has a definite minimum width instead of auto.

Despite the somewhat unintuitive cause, the fix is actually pretty simple.

As for why we don't do text wrapping on code blocks, it's precisely because they are code blocks. This is generally a personal opinion (like tabs vs spaces), but the stance we are taking is that applying text wrapping to code can cause unnecessary confusion in regards to things such as line numbers and literal whitespace (which is important in certain languages like Python).

54
Badge multiplier in the profile page is misaligned
44
One-line codeblock scrollbars won't disappear
2
Broken layout in mobile version of profile page -> activity -> responses caused by profile picture from Facebook?
0
Return to answer after expanding a code snippet does not work properly
24
Comment box is misaligned with button on 2019 Moderator Election page
15
Scroll bar overlaps the flag prompt
5
Issue with Stack Overflow Jobs page on Chrome for Android
9
What are articles and why are they only visible on mobile web?