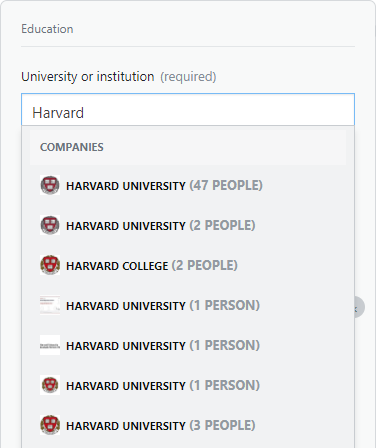 Of course, there might be the same university but different schools/faculties, but since this field is intended to state the university/institution name and there is just one Harvard University, there should be just one single option.

It would be great to make a housekeeping and eliminate duplicate entries.

This is an artifact of how we designed the system to work in this case. Users are free to type in their own university or company name there, assign a picture and other details, and use in on their developer story. When they do that, it becomes available for everyone else to choose from. When users do not actually choose from an existing option and keep re-entering the same names - or maybe the logo was wrong so they created a new one, whatever the reason - then you end up with lists of the same things in the suggestions.

There isn't a lot we can do about this in our current system. The current "lists" system that governs that suggestion box is the result of a larger project that never succeeded being scaled down to the bare minimum. Then there were plans to just drop them and have users connect to Company Pages in Jobs instead, which also never materialized. We generally never got involved in making changes or consolidating those lists and have no interest in starting to do that given, as mentioned in the comments, Jobs is being discontinued and that consolidation work would be rendered moot in the future.

Even if we did consolidate all of these into one, there's nothing that would prevent this just happening again. As I mentioned, you can ignore the suggestion prompt and enter your own information to create another list. And people will continue to do that without us completely rewriting how those lists are suggested and created.

Not the answer you're looking for? Browse other questions tagged bug status-bydesign developer-story .