What do I do when I see an answer consisting of basically the same code in the question?

Recently I faced two cases in the "First posts" review queue where the answer (the post which needs a review) was containing only code. But the problem is that this code was literally copied from the question and the answerer did not even change any character. In the first case, I flagged the post as spam because I thought this will be the best decision but the flag has been declined. In the second case, I flagged the post as a very low-quality post but it was declined as well as the first one.

What should I do to remove these useless posts?

Here are links to the posts that my flags has been declined:

The easiest option when faced with this kind of answer is to simply downvote the answer. This is a good signal to future readers that the answer is not useful. You could also optionally leave a comment stating that the answer simply repeats the code in the question.

I would agree that the answer is useless enough that it should be removed from the site, even though it's not causing any harm per se. If you have the privilege to delete answers (and it's negatively scored, which is almost certainly the case), go ahead and cast a delete vote. The answer will probably show up in the 10k tools, where other users may cast a delete vote as well.

You could ask a moderator to delete it, by raising a flag. Note that none of the standard flags apply here; it's definitely not spam (or R/A), it's not VLQ, and it's not NAA (it's definitely an answer, just a useless one), which are the usual flags used for removing content. Raising a custom flag saying "The answer repeats exactly the code in the question, and adds nothing new. It should be deleted", has a reasonable chance of being accepted, although moderators generally prefer not to have to intervene in cases where the community can deal with it.

If you want to increase the chances that the answer is deleted by the community, you could post a del-pls in the SOCVR chat room. Make sure to read the FAQ, which has guidance on when, and how, requests should be posted.

The problem is that the usage guidance around the "not an answer" flag is pants-on-head retarded.

What a reasonable person would do is look at a so-called "answer", see it's evidently not an answer to the question posed, and click the flag, at which point they're presented with this dialog: 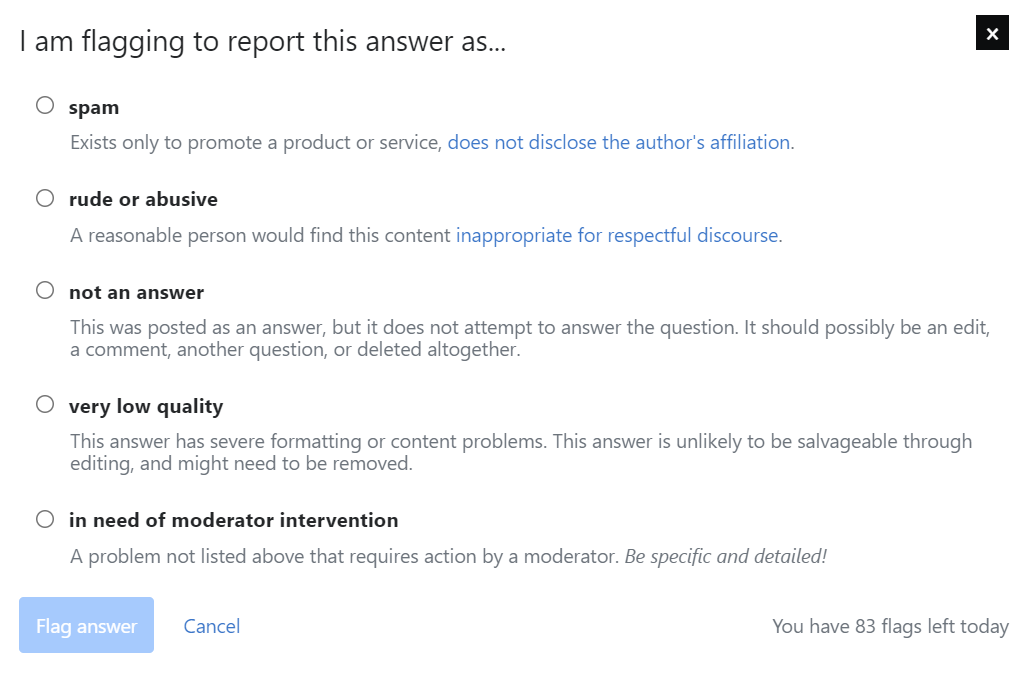 And hey, guess what, there's a convenient option that says "not an answer" right there, and its flavour text says exactly what the problem is:

So a reasonable person will select that option, click the "flag answer" button, go on their merry way thinking they've done their good deed for the day... and a few hours later, get a notice that their flag has been declined.

That is not reasonable in any way shape or form. The user followed the instructions given to them by the system to curate content, and the system rejected them when they helped.

Forget about non-confrontational language and correct pronoun use - if anything on Stack Overflow contradicts the "be nice" ethos, it's this absolutely shameful situation of people trying to be helpful, and being told their help is not wanted.

The sad part is that, despite the recurring questions on this insanity on Meta, users - including many longstanding ones - just take it for granted that the system is broken and don't bother explaining that, instead focusing on telling incredulous users "this is insane, but you should just get used to it".

It is obviously not a spam. It is just non-answer. Copying back exactly the same code of the question, without any text, obviously does not qualify as "attempt to answer".

Note, even if the code is not exactly the same, but there is no textual reply, the answer almost surely qualifies as VLQ.

The difference is the input we give to possible anti-spam algorithms, and that the OP deserves -100 or not.

33
How should I flag a literal plagiarism of a question?
25
Too many declined flags to flag post
3
What was the proper way to flag this answer?
30
How to handle an obvious edit to the first answer posted as a second answer by the same user?
22
Why was my "not an answer" flag rejected here?