I am wondering if we can change the suggestions in the input boxes to not point at specific programming languages somehow.

Right now, it reads like a value judgement to me. I read this as HTML and C# are good and PHP and C are bad. In particular, naming PHP in there feels prone to the same old bias PHP users are facing for years. Also, there is no technical need to have a different set of suggestions there to illustrate how to use the input boxes.

How about putting the same tech in both boxes to make clear that this is not intended as a value judgement? It's a subtle change but I feel it would make the selector more neutral and likely more inclusive, given that developers tend to identify with their primary programming language. 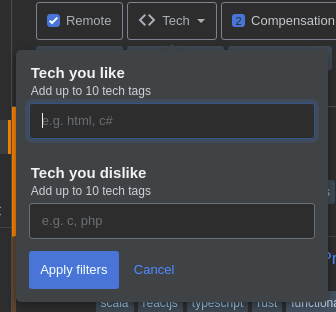 Yes, I agree those entries should both have the same boilerplate/placeholder suggestion.

I propose to join them so it becomes

If there is a good reason to have different boilerplates then I suggest using familiar-looking "names" that are not quite right, for example:

This will only lead to new contention when I bring see## to the market.

With this settled, we can all move on.

What if, on balance, this wasn't a judgment call, but was supported by some data that Stack Overflow itself has been analyzing for quite a while?

Subjectively though, there's more impetus to teach or showcase technologies like HTML and C# in workshops and it's also more in demand than say PHP or C.

But I don't want to read too deep into it. I'm just going to regard this as a simple placeholder, and if someone happens to like C or PHP or both, then they are empowered to put that in as concrete things that they do like.

It isn't like the form is auto-filling the tags in for you.

First, I would like to point out that this is a very low-priority item, regardless of whether we establish that the placeholders are indeed "inclusive" or not. I say that to mean, any consequences of this issue are very, very minor. The change being inconsequential to even the users hypothetically most affected by the issue makes it sound not worthwhile to me.

Second, we also need to acknowledge that what you're reading as a "value proposition" simply wasn't designed as one. It's not a language rank. It's not a list of languages and how they compare to each other. As you've pointed out, the supposed data behind "php and c are less liked than html and c#" includes many more languages than these 4, leading me to believe this was not intended as any sort of actual depiction of value. If it's not actually depicting value, then reading it as if it was is just... incorrect.

Third, and finally, I don't think it's a stretch to say that this was almost certainly written to be humorous, in exactly the way that you lament as "the same old bias PHP users [have faced] for years". What you call a "bias" is something that's been a meme and in-joke in the programming community almost as long as PHP has existed, among both PHP developers and others alike; I think casting it solely in a negative light, as a "bias", is short-sighted, and just not correct. A programming language doesn't suffer from being the punchline of these jokes, and PHP developers don't suffer from jokes being made about their language.

At the end of the day... I really do think they're just placeholders, making this change unnecessary overall.

Alternatively, you could just not read too much into it, as they're merely placeholders.