Why can non-coders take the Developer Survey this year?

In last year's Developer Survey I noted that non-coders are prevented from completing the survey; after providing enough information to show that they are non-coders (and some additional information) the survey ends and they receive the following message:

The Stack Overflow Developer Survey is for those who write code as a hobbyist, student, or professional. You indicated that none of these describe you. Thank you for your interest and click here to learn more about Stack Overflow, the world's largest community of developers

I just tried the same thing with this year's survey, and I was able to make it through the entire survey. This is despite the fact that I answered the first question about my coding habits with "None of these": 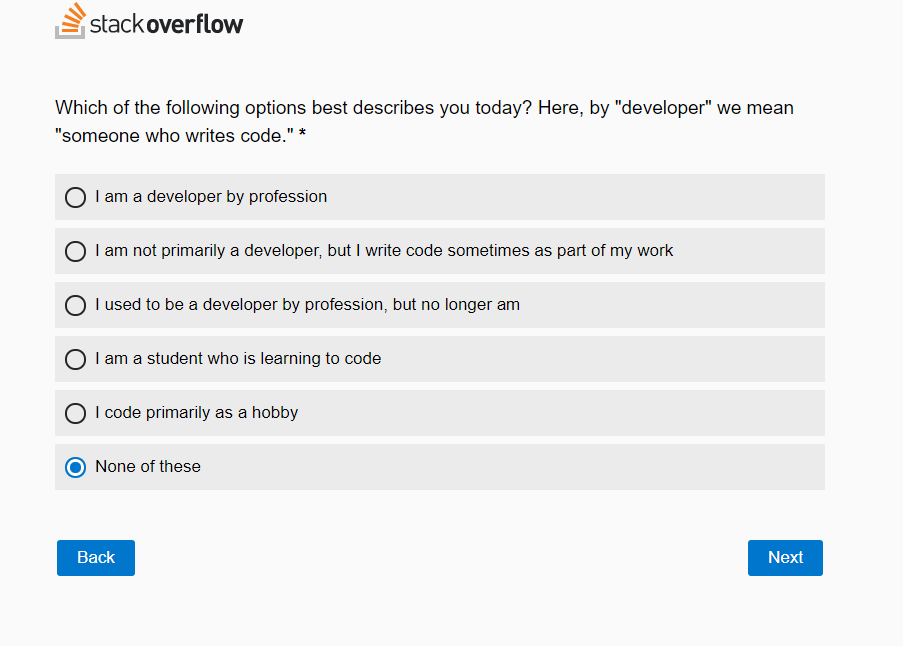 Now I suppose that it could have been possible that this year Stack Overflow wanted input from non-coders as well, but this does not seem to be the case because the link that I followed to get to the survey was in a banner notification on a different network site which explicitly said that they want input from coders:

It might also have been assumed that a non-coder would get stuck on one of the later questions which ask about the details of your coding experience, and thus would not be able to complete the survey. However, every other question related to actual coding was a non-required question, so it was possible to get to the end of the survey without providing any coding information.

While I doubt that many non-coders would bother to complete the survey, it is apparently possible that they can do so (whether maliciously or not). This, of course, would dilute the accuracy of the data, unless all data associated with someone who selected "None of these" in the first answer is automatically discarded. If that is the case, though, it would be courteous to inform the people taking the survey that there is no point in doing so, to prevent them from needlessly wasting their time.

(In point of fact, I did not submit my survey, precisely because of the above mentioned concerns. It is possible, then, that when clicking on the submit button I would have received some form of rejection notice that I am now unaware of, and the survey would not go through. However, if that is the case, then I should receive that notice after my answer to the first question indicating that I am not a coder, instead of after spending time on the entire rest of the survey.)

3
What is the point of the third question in the survey if I already indicated that I don't code?