I think, it would be nice to see which questions are most consulted.

This would allow our team to:

Also, I like the upvote feature, but not everybody is using it. which make it hard to know which question have to be answered first. This may also be useful for the public Stack Overflow community.

Edit: Explained use case
I've a small team of 7 people, which contains front/backender, sales and support.
So, the question diverge at lot.

But maybe sales & support are the one that view the most a lot of answers, while developer could be people that only have a look once a day.

In the case I will sort with Most frequent I may only see the developer questions & answers, which will ignore the rest of the team... 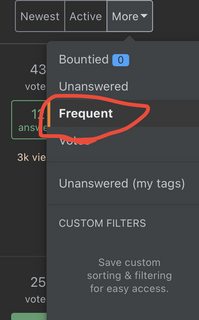 The one downside of this sort is that it's all-time, so it doesn't indicate what's recently being accessed.

How big your Team is may change the experience of people using it - both people struggling with understanding issues and with people trying to address them. Voting is an important aspect and getting people to remember to vote is something that we've struggled with on our public sites, too - so you're not alone.

Often, it's cultural to the site - some sites have tons of voting and lots of people who are there sharing their feelings about the content. On other sites, even ones with lots of people, there's not a lot of voting at all. That could be for a wide variety of reasons, and understanding why is the first step in understanding how to get people to vote more.

Sometimes that means helping people understand the value of voting and the signal it sends. It can take some effort on your part to encourage people to vote - if your Team is used to using passive resources like a wiki or forum where voting isn't an option, they may need reminders that the voting feature is there for them to use.

Not the answer you're looking for? Browse other questions tagged feature-request stack-overflow-for-teams filtering .