Why was my spam flag on this question about Shopify declined?

I flagged this question as spam. Here's the content, in case it's deleted:

Is there any way to use multiple discounts on Shopify and how to apply coupon on cart page. So, that i can retain my customers?

How to use multiple discounts codes? How to use two discount codes on cart page? How to retain my customer by giving the discounts?
stackshopifydiscount

This is the answer: 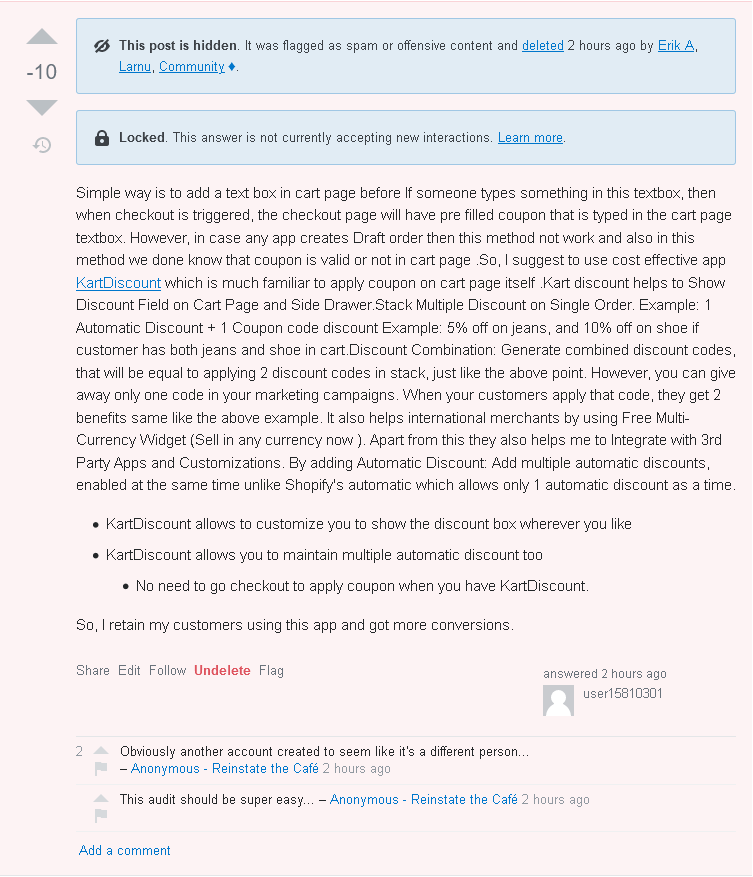 The accounts who are the OP of the question and answer were created today, so it's obviously the same person who answered.

Why was this declined?

While I understand the desire to get spam seeds gone quickly, it is inappropriate to flag a question you think may be a spam seed as spam without more evidence that it actually is a spam seed. There are a variety of things which could be sufficient evidence. For example:

In general, we should be assuming good faith. To overwhelm that assumption requires a bit more evidence than existed at the time you flagged or at the time your flag was handled.

The question, on its own, is not spam. It is most certainly off-topic, and should (probably) be downvoted, voted to close/flagged as off-topic, but it is not spam on its own.

The answer, however, is most certainly spam. It is advertising a specific Shopify app and it's purely worded to advertise that product. You should have flagged the answer as spam not the question.

When you flag a post as spam the moderators will review that item in solitude; they probably don't see the comments and definitely don't see the answers to the question. As such, to a moderator that reviewed your flag, they would have seen an off-topic question, not a spam question.

Likely, as well as the spam flag on the answer you should have raised a custom moderator flag on the question noting that the question itself seems to appear to be a "seed". As there are 2 users involved this would mean that a moderator would review this and if the 2 users are indeed the same, further action could be taken against both.

TL;DR: The post as a whole is spam, but not the question itself when reviewed in solitude without the answer. The answer and question together were clearly spam though, and a custom moderator flag would be the far better action here as the spam flag on the question would not highlight the true problem to the moderator.

This question was created for the sole purpose of giving the answer, which is really the spam in this case, a question to answer. (As Yatin says, it's a spam seed.) While it technically doesn't fit the definition of spam, I'm not actually sure if the spam flag should've been accepted, but it would've been better to use the spam flag on the answer, and use a custom flag on either the Q or the A to let us know you suspect this user of sockpuppeting.

I would act on this user, but SpamRam seems to have beaten me to it.

Not the answer you're looking for? Browse other questions tagged discussion declined-flags spam moderation .