A friendly reminder to all those who need it:

Once more for the people in the back:

There's a great post on the Stack Overflow blog about why you shouldn't clone code from the internet into your projects, but this advice applies even if you're just copying someone's code to answer their question!

This question appeared on Stack Overflow tonight: My python project is closing when i run it [closed]The question has since been deletedThanks mods!

The question claimed that OP's Python project wouldn't open, and gave some code.

And then some images of a couple windows.

The decoded base64 string contained code to connect to a server, download yet another payload, and exec that. I'm not brave enough to download that can of worms.

The question in question was promptly edited to hide the malware and closed, so no harm done, but this serves as a great example of why you should never, ever execute code you found online without first understanding what it does -- even if you found it on Stack Overflow!

While I understand that this is common sense and that people should know to treat code they find online with a healthy dose of mistrust, can we add a warning to the FAQ or somewhere that makes this danger clear to people? Can we do more than simply posting a warning to not blindly copy paste code that nobody will read or remember?

* Without first understanding what it does

We should totally add a warning popup that appears whenever someone is copying code. You know, like this: 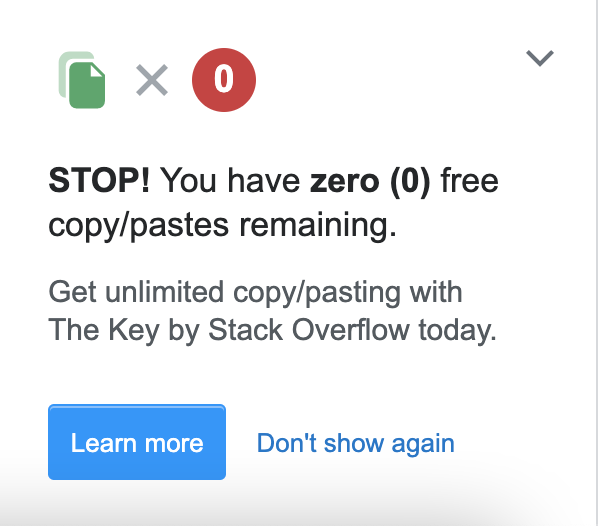 The Learn more button should link to this meta thread, or the blog post. You may dismiss the popup for a few number of copies, by clicking Thanks for the warning, I understand the risks, but it should come back from time to time - at least every 1st of April.

I think the comments on the questions should be addressed:

This is malware. You can go take a flying leap.

Malware: yes, this would probably qualify as malicious software. Abuse of the OP wasn't called for though. Yes, they could have made it clearer that it has the potential to lead to an infection, but this could have very-well been a legitimate question. I've used this payload before for homework (if not exact, a very similar one). I don't think the assumptions of intent were fair.

Also, for the sake of analysis, the actual script can be fairly easily viewed by replacing the call to exec with print, and decodeing it so it displays nicely:

So, it opens a socket to '8.tcp.ngrok.io':16005 (IP removed from above to make it more difficult to accidentally execute), receives the number of bytes to download, receives that many bytes, then executes the final value of d.

This would be a payload stager, and given the initial question mentions "metasploit", it's likely a meterpreter shell stager. This code alone would be completely safe to run without a network connection or with an invalid IP/port combo, since it doesn't establish any kind of persistence on its own. Once the connection is established to the remote server however, an attacker could use the sessions to gain persistence (starting a payload every time your computer boots for example), or carry out a number of other exploits. If a connection were to be established, you should consider that machine and anything else on the network potentially compromised.

This analysis "technique" can be used for any other kinds of similar encoded code. As long as there isn't an exploitable vulnerability in the decoder that is taken advantage of, it's safe to decode. If you want to be extra careful though, you can use a Virtual Machine without a network adapter, take a snapshot of it, and try it out.

This is in fact a meterpreter stager. I can recreate the code by simply running:

(Although, that doesn't specify the host or port to use).

I get it and agree that base64 strings are apparently all the rave when it comes to being able to sneak in malicious content and malicious behavior. Seeing a base64 string is just...well, it's easy to ignore because it's not clear what it does.

I also get that there's this heightened awareness and concern over someone compromising your system, and this seems like a fairly straightforward way to accomplish it.

The problems that I have with this are multiple:

Overall I agree with the thrust of this discussion and PSA, but I can say that I'm somewhat disappointed with the overreaction.

Detecting When Code is Selected

Ideally, there should be a system in the background that runs some sort of scan, as soon as a piece of code is selected in the browser.

Finding out whether a piece of code is selected (about to be Cmd/Ctrl+Ced) can be done via https://developer.mozilla.org/en-US/docs/Web/API/Window/getSelection as soon as a mouse click occurs.

Now, if the selected code is from an answer that doesn't have enough code-reputation, it should warn the user with:

Now, the question is, how to compute/add "reputation" to a code.

I was thinking the number of answer's upvotes (or whether or not a high-rep user has upvoted this answer) can help. But in a systematic attack, the bad actor might upvote the answers with a bunch of fake accounts. It's a good method for the beginning but ideally, it can be its own verification badge.

PS. before you vote negative!

35
How best to redirect all duplicates of "Why doesn't <Python string method> do anything unless you assign its result"?
130
How to cope with complaints from tutors who want to fight cheaters
51
What can I do about a user consistently spreading misinformation?
77
Should questions about obfuscated code be off-topic?