How should Stack Overflow improve its response to questions moderators consider self promotion?

A few weeks ago I was working with VS Code and noticed they had created an issue template such that any Questions that would otherwise have been asked in their GitHub repo were redirected to Stack Overflow with their tag. See their new issue selection here: https://github.com/microsoft/vscode/issues/new/choose which links here: https://stackoverflow.com/questions/tagged/visual-studio-code

Last week, I had just finished answering and closing a bunch of questions on my relatively popular Clean Architecture repo and I decided to follow suit, as seen here: https://github.com/ardalis/CleanArchitecture/issues/new/choose linking here: https://stackoverflow.com/questions/tagged/ardalis-cleanarchitecture

I then took one of the FAQ questions for the project (very simple how to install the template), used the above tag, and self-answered it: 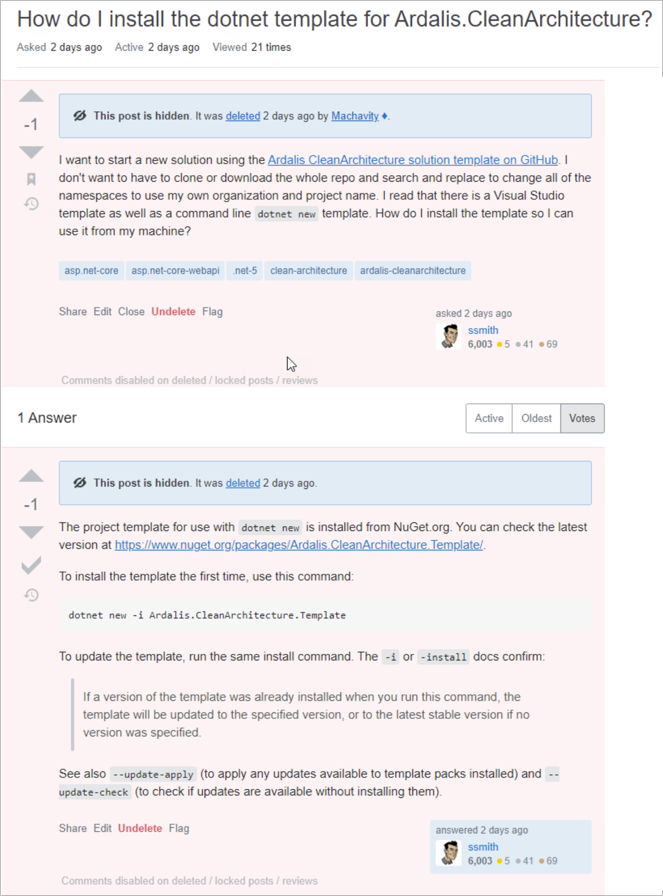 Sometime later, I got an email, saying: 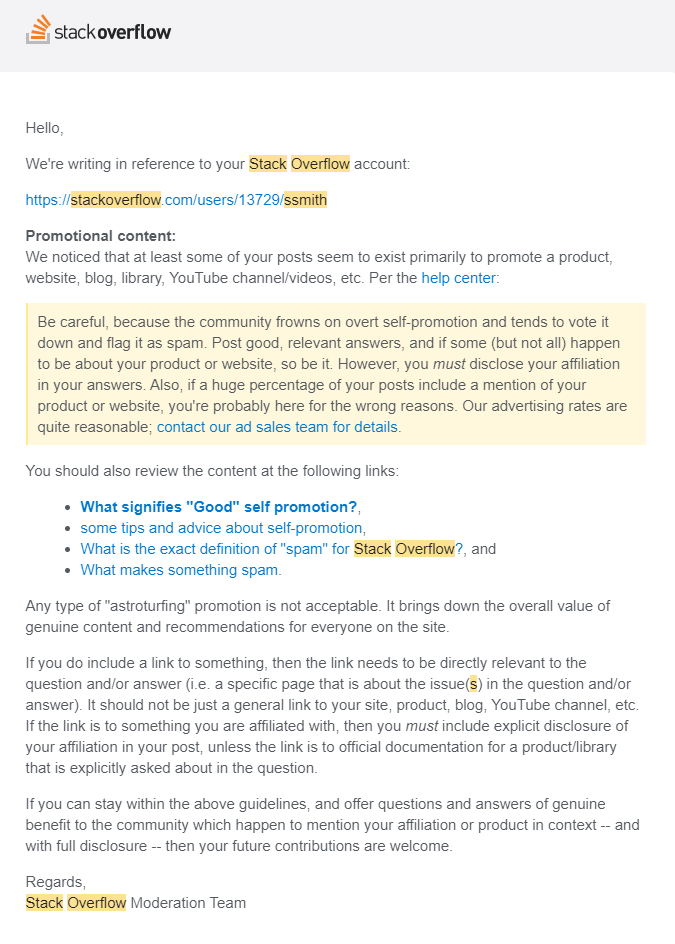 This email did not say that my question had been deleted nor did it suggest the need for any action on my part. I did not receive any notification at all that my question was removed. The email comes across as a friendly "FYI, take care you don't step over the line when it comes to self-promotion" which is great, except that apparently, it was misleading since actions were already taken in this case (deleting the question).

I sent an email to the moderation team asking for clarification, explaining that my use of the new tag was directly following the example set by VS Code (another open-source free tool). Days later I got an email that didn't answer my question and instead said to post something here, so I am, and I fully expect someone to moderate this message because it's duplicate, too specific, or whatever. (But if that's the case hey you folks had your chance when I emailed you directly.)

Note: Nowhere in the deleted question does it say why the questions were deleted nor was there any communication to me through other means (email, SO inbox, etc.) advising me of the action that was taken, why it was taken, or what I should correct (apart from the vague email referenced above, which I did a review but assumed since no other communication came in that I hadn't breached any policy since it didn't say I had or that any action had been taken).

How should Stack Overflow improve its response to questions moderators delete because they are considered too self-promotional?

Firstly, the email you got and the community curation process are not tightly coupled. There is no "email first, curate later" policy. Also, regardless of the popularity of the project/tool/product, you are (as we all are) expected to acquaint yourself with the community guidelines on when it is fine to use SO as a support channel.

Secondly, it is considered common courtesy (actually, this is an understatement: it is more of a requirement) to avoid artificially creating tags for projects (open-source or not) or products. Citing the FAQ:

If no one unaffiliated asks questions about your project on SO, chances are it is premature to consider SO your support channel. If you search for questions about the project (and not the Clean Architecture itself), you will find only 4 of them (at the time of this writing) with only 1 directly related.

so I am, and I fully expect someone to moderate this message because it's duplicate, too specific, or whatever.

Note that by posting on Meta, you are asking the community to weigh in, not only the moderators. Adding slightly veiled confrontational language usually results in posts not being well-met. If the question already has answers elsewhere, it will be rightfully closed against the duplicate target.

The following question was present in the original revision and came up several times in comments:

Should users be notified via email and/or in their profile somehow when one of their questions is deleted?

I would say they should (as an opt-in preference probably, plus there is a huge pile of potential issues to discuss), but the feature was declined before (see Jeanne Dark's comment) or left unnoticed when it resurfaced (see this MSE post or this one).

Stack Overflow should provide users with a log of how their content has been modified by moderators somewhere in their profile, and potentially in their SO inbox.

The moderation team has come out against sending actual notifications to users whose content is deleted (see Send notification when question is closed or deleted), but this approach would not involve any outgoing notification. Instead, if users somehow uncover the fact that moderators have deleted their content, they can at least go to a single place in the web site to learn exactly what was done and why.

Naturally any actions presented to the user in this way should also include the rationale for the actions that were taken, and any links to policies, etc. used to justify the action.

Note: the question in its current edited form is "How should Stack Overflow improve its response to questions moderators consider self promotion?"

Stack Overflow's current "response to questions moderators consider self promotion" is perfect and does not require improvement.

That process is to delete the question (and any associated answers). There might be an email letting a user know they might recently have posted something that appeared self-promotional, but as @Oleg noted in his answer that's unrelated to the community curation process.

Users are expected to know, understand, and remember all Stack Overflow policies that may relate to their question, in their current and most-recently updated form, before asking any question on the site.

Users are expected either to not care whether their recently posted content is available on the site or not, or if they do care, they are expected to discover the current status of their content by periodically polling the site looking for changes.

In short, if users find the current "response to questions moderators consider self promotion" to be frustrating or in need of improvement, the problem is with the user, not the process.

Stack Overflow should notify authors of content when it is deleted by moderators. It should include the reason for the deletion with a link to the policy that was violated, if possible. If the emails are unwanted by the user, they should be able to adjust their notification settings.

The fact that this approach has been suggested and rejected in the past notwithstanding, it would have provided a better experience for the question author (me) in this example.

380
Why can't I ask customer service-related questions on Stack Overflow?
244
2019: a year in moderation
98
Is it acceptable to use Stack Overflow as a Q&A for a specific product?
43
Do any companies have agreements with Stack Overflow to use the site as a support channel? What's the best course of action if not?
31
What is the policy regarding sparse self-promotion in answers?
80
Send notification when question is closed or deleted
-19
On-topic package management questions?

77
How to tell if an email from Stack Overflow is genuine?
10
Should an on-topic edit that links to a personal page/library be approved?
56
Help me help Stack Overflow: what should a new user do when answering duplicate questions?
64
Is Stack Overflow a good place for self learners?
39
Multiple answers in a short time that may fall foul of the "disclosing affiliation" rules
16
In "Low Quality Answers", should we cross-check package references to identify Improper Self Promotion?