Deletion/undeletion battles - should moderators step in?

I think I'm not the first person to realize that there are often deletion/undeletion battles going on in a certain tag that has been discussed recently in a separate meta post.

I was going through the moderator tools today and saw an interesting post with a timeline involving successive deletions/undeletions in a short period of time.

So I'm just curious whether moderators are automatically informed of such actions. It seems this cannot be solved with the effort of the users involved, which will inevitably end up as an infinite loop of delete/undelete, and/or close/reopen.

Additionally, should there be some mechanism to limit the number of deletion/undeletion votes that one could cast on a certain post to, say, 1/2? It shouldn't be necessary for one to cast more than 2 delete/undelete votes on a post, because if that happens it probably means a battle is going on.

The answer is yes, but there's some caveats here.

As I noted on MSE

It's clear that motivated users with that privilege will continue to delete/undelete ad nauseum, and it actually diminishes the delete privilege because people who disagree will get more votes tomorrow to change it back the way they see fit. Add in Meta effect and it can prevent community consensus, leaving mods to fix it with nuclear weapons.

The nuclear weapons are... well... nuclear

Here's Gru to describe why locking is nuclear 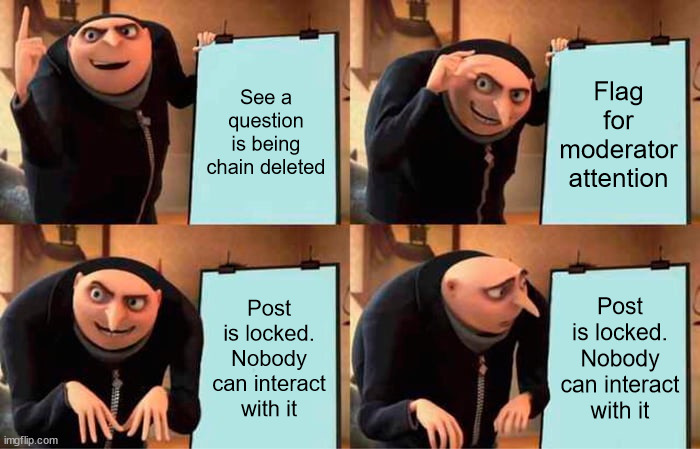 Locks prevent all interaction with a post, including up/down votes, comments, edits, etc. When there's a content dispute, a simple timed lock can help. But, in this case, it's not very effective because motivated users just outwait the lock. A permanent lock isn't a good idea, either.

If a diamond (moderator or SE employee with a diamond) deletes something, only another diamond can undelete. So no more delete wars, but it's deleted.

Like locks, we can suspend you, which prevents you from deleting or closing things. But... that's not something we just do off-the-cuff. Most deletion is benign and content disputes aren't something mods prefer to resolve. I mean, which side is right? We have tools to make sure a post is gone mostly for good, but not tools to make sure others don't remove it other than removing their ability to interact with the site.

So I'm just curious whether moderators are automatically informed of such actions.

There's no autoflag for delete wars like there is for things like contested duplicate closure. So if you don't say anything (via flag or Meta), there's no easy way for us to find out.

Also, should there be some mechanism to limit the number of deletion/undeletion votes that one could cast on a certain post to, say, 1/2? It shouldn't be necessary for one to cast more than 2 delete/undelete votes on a post, because if that happens it probably means a battle is going on.

I have asked for that very thing

They should never step in, their involvement will very much stop the process of curation whatever decision they come to, as this answer properly alludes. Content curation is, and more so for a site of the age of SO, aggressively needed. There are already post on the site that call for deletion only on duplicates that have no answers, which is wrong. A library of high quality programming questions should not accept subpar content, like questions that do not provide novel keywords to find the canon question. Those should be irremediably deleted.

The problem here is that the users voting for undeletion are not using their powers correctly: if they actually believe that there's content worth preserving, that content should be on the canon question, if they believe that the question was wrongly closed then they should be voting for reopening. A duplicate question is either a useful signpost for the canonical question or it's not a duplicate, there's no in-between.

140
Rule proposal: one delete/undelete per post
163
What should we do when one person tries to delete every duplicate?
148
What flags are automatically raised by the system?
41
When, and when not to disclose names when discussing a users actions on meta
-29
Discussion on discriminatory user behavior
-19
Does the delete/undelete vote feature need to be revisited?
36
Why are we able to vote to delete or undelete over and over again?
-3
Why was this question about writing an awk script deleted?

1
Ask for question undeletion with less than 10k reputation
51
About significance of questions and whether or not they should be deleted
26
How many duplicates (if any) are enough to justify deletion of a question?
46
Why did this performance question warrant not only closure but deletion, too?
140
Rule proposal: one delete/undelete per post
38
Should posts that are actively being discussed on Meta be temporarily exempt from deletion?
22
Does this deleted question deserve undeletion?