In your free Team, under Users, you can invite users by email address by clicking "Invite users", which shows a popup: 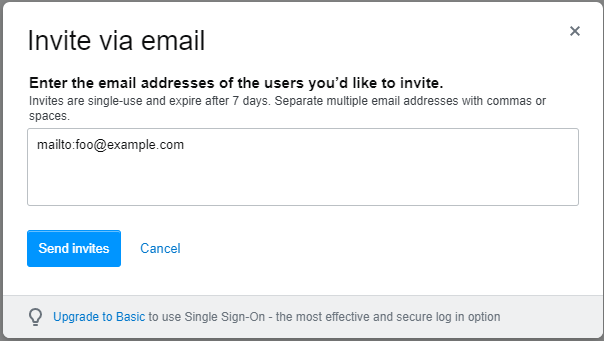 Now you see, someone sent me their email address over IM, and the IM client helpfully prepended "mailto:" in front of it, which I'm pretty sure the form won't accept, so I want to remove it. So I positioned my mouse cursor before the "f" of "foo", and dragged my mouse wayyy to the left to select all text before it (being the "mailto:" part), after which I intended to hit either backspace or delete, wherever one of my fingers was closest to at that moment: 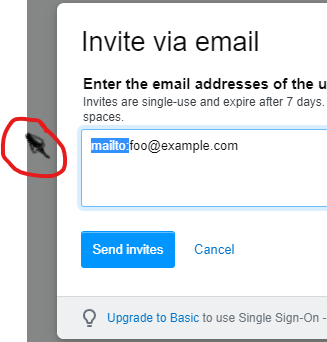 (That black thingy circled in red is my attempt at drawing a mouse cursor, which Windows' Snip & Sketch doesn't include in screenshots.)

See it in action, courtesy of Oleg Valter:

Now when you release the mouse button outside that popup, the popup disappears, sending your input (including the mailto:) to /dev/null. The same happens when drag-selecting any text on that dialog, for example the title.

That should not be happening. See also If you do something on keyup, make sure you got the associated keydown first.

123
If you do something on keyup, make sure you got the associated keydown first

15
Hide left sidebar when using Stack Overflow Teams
19
When signing up to teams, your profile pictures on other SE sites gets updated
8
Bug in Teams when confirming domain
21
On Stack Overflow for Teams, are votes undone when users leave?