Reading the Meta question Question is on-topic for one site, but fits userbase knowledge of another where it would be off-topic, I realized that there's likely quite a few other members having the same problem, including myself. And we have the problem from both sides. Questions aren't getting answered because they aren't being seen by the people with the appropriate knowledge, and members aren't seeing the questions they are interested in without having to go to actively search for them.

One of the problems is that some Stacks are related to each other, yet they focus on two different aspects of that same thing. In the above instance, one Stack is strictly about hardware and the other is about software. You use software to program hardware, so sometimes you need to need to know the hardware to program as well as needing to know software in order to fix or design hardware. Sometimes it's particularly difficult, to near impossible, to phrase a question so that it's on-topic for the Stack where you will get an actual answer from the people likely to know it.

In the comments of the above question, @gnat reminded us of an old project: Technical site integration. The project failed, but, with some major changes, it could be revived into something useful. In one of my comments after @gnat, and as a response to another member, I said:

@PeterCordes, it seems as if there is at least a partial solution, if unwieldy. The "integration experiment" gnat talks about seems like a good start, but maybe needs to be moved under "Linked" and "Related" and above "HNQ"? It might take some time to get it working well, but at least it wouldn't be as obnoxious. Members could simply subscribe to/watch tags from other stacks that could more easily show their interests in that area? It could also pull from frequently Answered tags for the member. That way content is funneled to people in a more cultivated way, instead of randomly, like HNQ.

This comment got a handful of "likes", so that's why I'm posting it here: to see if it's something possibly more widely interesting to members.

The idea is to get more cross-site visibility to topics that members are interested in, but aren't willing to sit on the "All/New/Bounty Questions" page all day (or longer) of every Stack they are interested in to see the 1 question on it they might be able to answer, or are minimally interested in. This is also intended to be more focused than the "Hot Network Questions" sidebar, as that seems to just be a collection of random "junk". It's often interesting, but also oftentimes distracting.

I have over 50 SE/SO accounts and another member in the same thread said they had 117 accounts. Being able to have a more focused "Suggested Questions" style area would be helpful.

Granted, some Stacks have overlap. RaspberryPi, Arduino, Software Engineering, and several other stacks all are related to programming in some ways and have overlap with SO in many ways. Several of them also have hardware aspects. This is fairly natural, but it also leaves questions unanswered that could be answered by users of another Stack, yet don't know about or at least don't frequent the Stack as often.

This even goes for other, non-technical Stacks. Every so often I see a chess question on the Board Games stack and I make a comment that it might be better answered on Chess. It's not off-topic on the Board Games stack, and there's plenty of chess players there to answer the question, but it would likely see more members that are interested/relevant on the Chess stack.

Stack Overflow and Stack Exchange, along with other sites, don't always have this capability. I've seen members post a question on one site, only for it to be closed and/or severely down voted for being off-topic with suggestions for it to be asked on "the other site", only for the same thing to happen on "the other site" and a lengthy comment section trying to get people to understand what had already happened. Unfortunately, I don't have any ready examples of that happening, but I've seen it more than once. (Any examples to add would be appreciated.)

This suggestion is different than the Outdated Answers Project, since this is more about getting answers to current questions, rather than looking at older questions.

So my question is, essentially: Can we revisit the idea of bringing the various Stacks closer to the user, so we see suggestions more related to our interests, without distracting us much?

If we wanted to get "fancy", this new section could also suggest other Stacks we might be interested in based on what we are already seeing, but I think that might be a bit off-topic for this idea right now.

The idea is to get more cross-site visibility to topics that members are interested in, but aren't willing to sit on the "All/New/Bounty Questions" page all day (or longer) of every Stack they are interested in to see the 1 question on it they might be able to answer, or are minimally interested in.

I'd like to address this as somebody who also "sits" on other stacks. This isn't a solution to discovering new stacks but to keeping track of them.

Basically, only Stack Overflow has the problem of having too many new questions. You're OK checking in once a day for other stacks - you'll still see all questions and be able to answer them.

You don't even need to stand there and hit refresh, you can create your own custom filter. Go to your network profile and click Filtered Questions at the top. You can now create a filter: 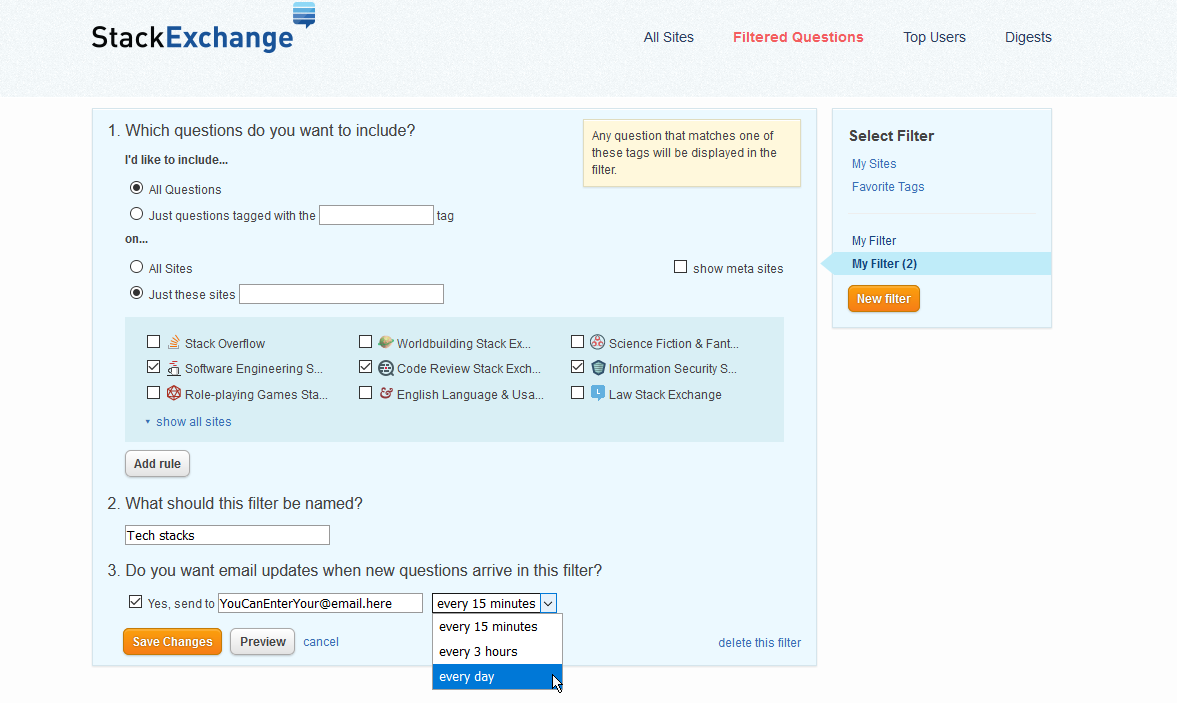 Specify which stacks you're interested in, and even optionally filter by tag. You can get emails for activity, if you enable the option at the bottom.

Once you create a filter, this is what it looks like: 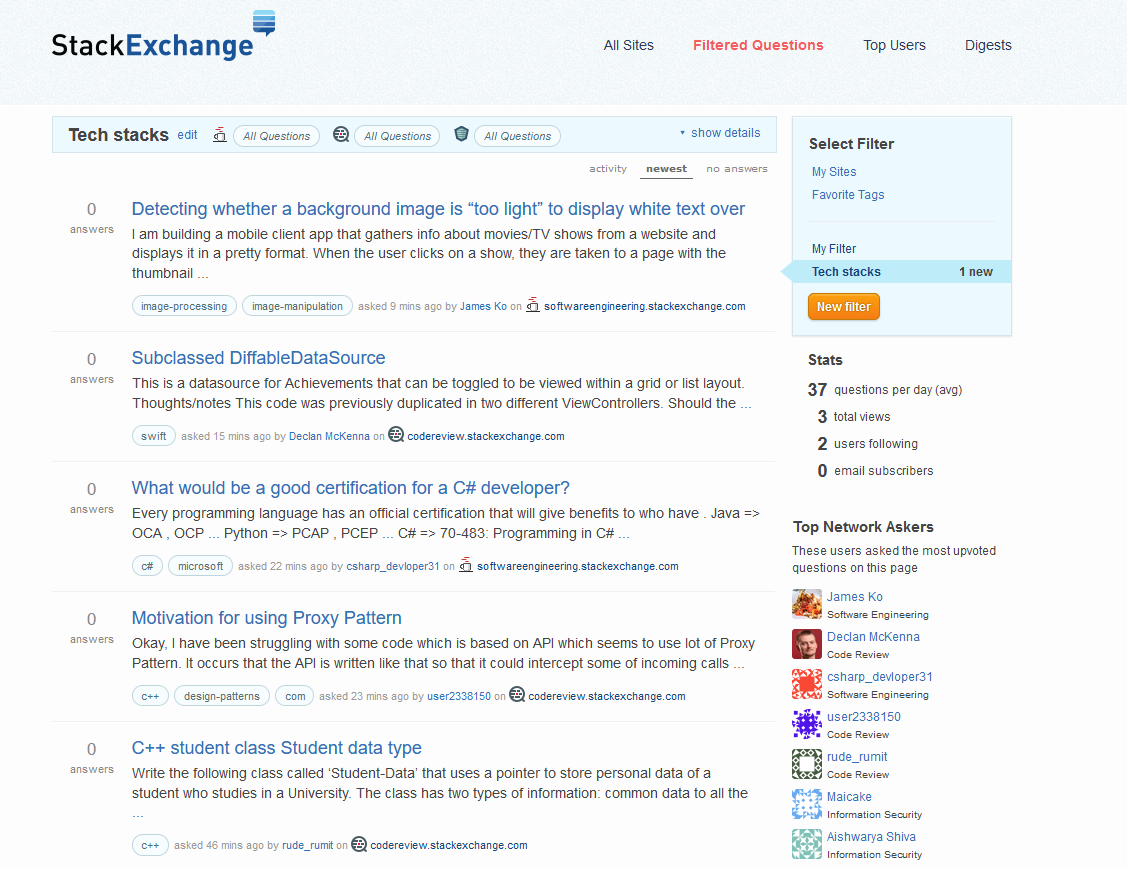 You can have a consolidated view of the stacks you're interested in, instead of having to visit each.

On the side you see it shows stats. The example filter I made is over three stacks and it says there are 37 questions per day on average. For comparison, I got a comparable number of questions in my custom filter on Stack Overflow by the time it took me to write this post.

410
Introducing Outdated Answers project
32
Question is on-topic for one site, but fits userbase knowledge of another where it would be off-topic
-201
Technical site integration observational experiment live on Stack Overflow

35
Are programming-related web apps off-topic on Stack Overflow?
6
Expand the section on stuff not to ask about on the Tour page
18
Is digital design on-topic without HDL code?