My on topic and useful comments are being deleted

Yesterday I posted 2 useful, on topic comments to a question and answer, one to each. Today I noticed there were deleted. This morning I left a similar comment and took screenshot just to be sure my memory was not bad. 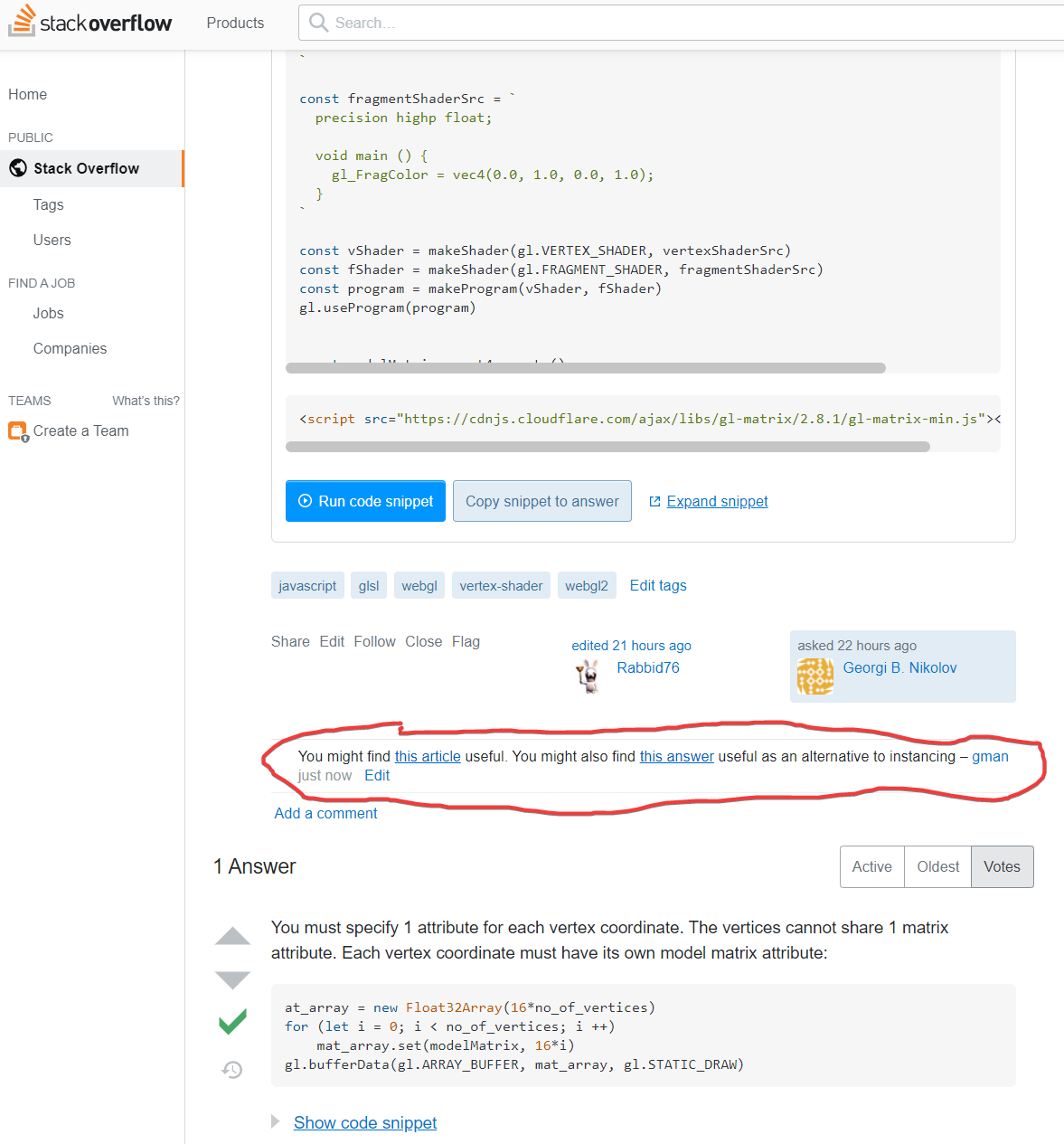 The question is here

It asks how to use mat4 attributes in WebGL2. I wrote a full article about that and so posted a link. That's a normal thing to do on S.O. Hundreds of thousands of questions have comments with links to tutorials, documentation, blog posts, as long as they are useful they are on topic

The second link was a link to an S.O. answer that showed a more flexible solution

Why are these comments being deleted? Is it some automated script? Is it an over zealous mod?

Even though your name doesn't appear with the article you wrote due to the nature of the site it's published on, it's really in your best interest to disclose that you wrote it anyway, just for the sake of transparency. Besides, presumably you're sharing your work because you take pride in it, think it's useful and want others to see it... so it only makes sense to let the reader know you wrote it anyway. So own it!

No need to be formal about it either:

You might find this article I wrote useful. You might also find this answer of mine useful as an alternative to instancing

And do it sparingly, not that I don't think you already are.

The whole "anything that's promotional in nature and undisclosed is considered spam" thing that Stack Exchange (the Q&A software, and by extension the community) likes to do, the perceived overzealousness of flags, and comments being second-class citizens on a Q&A knowledgebase are all conversations that can be had separately. If you're not regularly posting surreptitious links to content knowing it's really your work, you're not a "spammer". But you've been on the site long enough to understand that we care a lot about disclosure here, and I hope I've shown you how easy it is to stay within what I feel are reasonable guidelines.

As it’s often repeated: comments are second-class citizens. The most likely reason your comments were deleted was that someone flagged them as “no longer needed” and a moderator obliged on the flag. Accusing or implying excess of zeal by a moderator is not productive.

Comments' purpose is to address the post they are published under, so the post can be improved or corrected. The comments you mention do not seem to be aligned with that goal. Yes, they link the user to more information (I’ll take your word for it about their relevance; I haven’t followed any of the links), but they do not help to improve the question in any way.

Generally, post information you want to persist as an actual post, like an answer. If you can’t find a way to post it as an answer, you’ll need to be fine with the idea that comments can and will be deleted when their usefulness regarding the post they are addressing is fulfilled.

Linking to another post is fine, and in any case the link will remain even when the comment is deleted (in the “linked” section of the sidebar). So nothing was lost in that regard.

The link to your article can be a bit more problematic, because you are linking to something you are the author of, and you are not disclosing authorship. If you do this often enough, it’s not unlikely the behaviour will be perceived as “spammish”, and the comments will be flagged more often

Any time you post to something that can be understood as self-promotional, please make sure that you are disclosing your relationship with the linked material. And in any case, try not do it very often, since even with disclosure if one were to post posts or comments with self-promotional links very frequently, it can be seen as being excessively self-promotional.

But in any case, getting angry at comments deletion is not reasonable or productive. Is better to understand that the main content of the site lives in posts, and that comments are there simply as a feature to make posts better and more useful.

If what you wanted was simply to help the OP, the eventual deletion is not an obstacle: the OP is likely to have read the comment and linked material by the time the comment is deleted.

I've been made aware of this via Meta Stack Exchange (and via Twitter, though that was a link to a personal blog post of yours). I'm a long time user and 2 site mod, and a vaguely experienced user on the site.

I think that there's several issues here, not all of which may be obvious.

Firstly - we've totally failed in explaining the point of comments - they aren't answers 'lite' - they've always meant to be expendable requests for clarification meant to be rolled into a post.

Secondly - that the comment on its own lacks any context. Posts get deleted, websites go down. Considering that our goal (as much as yours) is to build a self contained knowledge base, this can be a problem. In this case without context, it turns clicking on, and accessing the link a hard dependency for your comment to have any use. Even posts on Stack Exchange could in theory be deleted for any number of reasons. Personal sites could be re-organised, or go down. Any one of these turns a formerly 'useful' comment into potential dead weight.

While I realise that you've spent a lot of time and effort building what folks seem to consider the definitive source of information on the subject - and commenting feels a better use of your time (and a way to re-use the knowledge artifacts you have already built) - there's a great reason we suggest people post answers- that it puts what users need in one place, as part of a single, self contained knowledge artifact.

Posting answers also means that the answer is tailored to the particular problem. That and referencing together reinforces the usefulness of the answer to the *specific situation*.

Its also worth considering we have our disclosure rules for a reason - that some folks abuse them. It might not be you but they too would go 'what about fooo?'. I often talk about 'Disclosure is necessary but not sufficient' - simply because shockingly enough, people try to find the edges of the rules, or point out that someone *else* did it.

As a primary, authoritative source - I'd also argue that your disclosure gives *additional* value to your content, simply because *clearly* people seem to recognise the quality and usefulness of your sources.

As a moderator - the philosophy I follow is proper disclosure is necessary but not sufficient.

If someone posts something they wrote (or something their employer sells, or is made by a project they're a part of), alongside other posts - their goal here isn't just self promotion. If a user's primary goal is to promote something, rather than take part in Q&A, we have a problem with them.

Further more - a well written answer by a developer familiar with their product, within the guidelines of a site can have a lot of value if its tailored to the issue at hand. On the other hand "Hey! Use gooboplex! Its awesome" is not.

First, and most importantly, the answers are always useful in and of themselves. He includes plenty of text in the body of the answer that solves the problem at hand. The link to the book is included only for further reading.

Notice - that I've shared the relevant parts of the answer, and linked back for further context.

You might find my answer here useful. This other answer by jscs also seems very relevant

I've not actually done anything novel - *but* I've built something self contained, and it'll last even if the original post gets deleted, or Stack Exchange for some inscrutable reason changed its URL schema without fixing things.

1 Amusingly that was down for a bit.

Which leads to a second point, which is that lots of people don't click on links.

21
Is it valid for a diamond moderator to use their powers to override the closing votes of other users, in order to reopen a question?
-3
How to dispute a deleted comment?

39
Why say "Stack Overflow is not a crowd-sourced debugging framework" when asked to reason a script behavour?
6
Deleted comments
19
Why was this answer by OP declared link-only answer and deleted?
9
Are "Why the downvote?" comments ever automatically deleted?
3
Why did my "useful" comment get deleted?
49
Your article is in another castle: should link-only articles be allowed?