How did a moderator manage to break this question by trying to close it?

This question Php dosen't insert query into database shows a page with the message:

A moderator confirmed that this happened when they tried to close the question:

I broke that one a few minutes ago, trying to close it.

The moderator is clueless about how this might have happened:

I have no idea how I managed that.

I'm curious about what's going on here; I've never seen this before. I assume this must be a bug of some sort. Does anyone know how this happened?

We had a ton of SQL timeouts right around the time when this question was closed (I'm not sure about the cause of those), so it looks like the close vote from Cody was cast and took effect, but the existing close flags weren’t resolved correctly. So we have two problems:

1. The flags have NULL columns that shouldn’t be NULL.
2. The code that constructs the “closed post” notice is supposed to fail gracefully, but doesn’t in this (admittedly abnormal) situation.

I fixed the first issue (gotta love manual prod DB updates). Looking into the second now, and I’ll check for any other posts that may be in the same situation.

Update: found two more affected posts on Stack Overflow (none on other sites) and fixed those up as well. The code change is in a PR awaiting review/approval and should go out sometime tomorrow to future-proof this for next time.

It seems that this bug only occurs for users who are able to view/cast close votes (3k+ rep).

A user in the comments with 2.3k rep can see the question, viewing it as a 1-rep sock account also shows the question just fine, and viewing it logged out works as well: 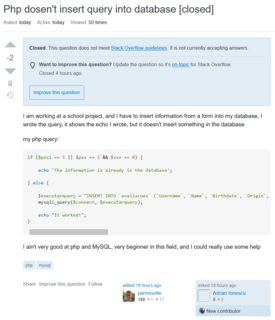 52
Why was the closing of this question so unusual?
44
Seeing "It was not possible to perform this tag search at this time due to an unexpected error" intermittently
16
Message notification (ping) from a moderator not received inside a question after a question was deleted
46
Why did this performance question warrant not only closure but deletion, too?