I've answered a very interesting question recently. I couldn't find any other resource about the issue, even after half an hour of searching.

The question has received another answer (after mine) that links to an existing bug report about the issue. The bug has been already fixed.

I can only imagine two reasons for that:

So here is the question: Is it valid to knowingly repost an existing (fixed) bug report as a question on Stack Overflow?

I'm not linking the question in .. question because I don't want the user to get meta-effected. It's an interesting question that shows an interesting (but faulty) behaviour of a programming language. It got many upvotes but is unfortunately very similar to an existing bug report.

It's only OK to do this if you answer your own question immediately (you have a check-box to do that): if you already know the answer, don't waste other people's time. Also, make sure your answer is useful, and some other person will not have to write another answer to replace yours.

If you discovered a fix independently, see if it's better than the official fix, and post the best. In any case, post a link to an official bug report, and don't plagiarize.

Also, please don't do this a lot. We don't need to repost all bug reports on all software tools here: it would be boring to read, and will make the site useless. Post only questions (and answers) which you think are likely to help someone else.

I would say there is a 3rd option: the OP is posting the question to make the answer more accessible. I would consider that a valid reason to post the question here. You spent a half hour searching and didn’t find an answer and then spent what looks like a considerable amount of time trying to post a helpful answer. Next time someone has this problem and searches for it, it might be found in seconds....

I can only imagine two reasons for that: ...

In case the asker did not knowingly repost the bug report I can think of one additional reason: coincidence. The asker discovered the bug and was unaware of the bug report.

It's difficult to know if somebody knowingly reposted an existing bug report, so I foresee some practical problems here.

In my mind, Stack Overflow is building a library of knowledge in the Q&A format. Quite a lot of knowledge that is also existing elsewhere is containing here, especially in simple, popular questions. And I guess that often enough, the askers here did not check that carefully to avoid asking a question that isn't already answered elsewhere. Duplicating knowledge will happen inevitably. And it's okay for important knowledge that is used often. Sometimes answers here can be better and a bit of competition doesn't hurt.

Having said that, askers are required to search for existing information and to present that research. It follows that there is no question left really if you already link to the solution in your question. Intentionally asking just for the sake of asking without any need for an answer (because there is already one) is just a waste of time. Yours and that of the expert answerers, and that time is precious. Don't do it.

Just because of unsuccessful or insufficient research we already get lots of duplicate questions (external duplicates that have been answered elsewhere, but also internal duplicates).

Caveats first. Before jumping to judgement, make sure you understand the situation. It's possible that someone asked the question both places at the same time, or maybe asked somewhere else first, then waited a while, and asked again on Stack Overflow.

So it's possible that after the Stack Overflow question is posted, and after your answer, but before the second answer, the question on the original site is answered. This is not far-fetched: this exact situation has happened to me several times. Sometimes I will shotgun a question across multiple sites. Some might say this is a dubious practice; that's their opinion.

At any rate, if in fact my situation here matches what actually happened in your case, then I say, no harm no foul.

But, if all the above is wrong, and in fact the offsite question was already answered before anything on Stack Overflow, that's bad. It would be one thing if the person got an answer offsite, and then paid it forward by posting an answer on Stack Overflow. But to just post the question again for "reasons"? No.

Another valid reason to post a bug report (fixed or not) in a Q&A form on SO: make the bug report easier to find on the web.

Of course, if this is the reason, the answer should be posted immediately after the question - the checkbox to answer your own question is right there at the bottom of the "ask a question" form: 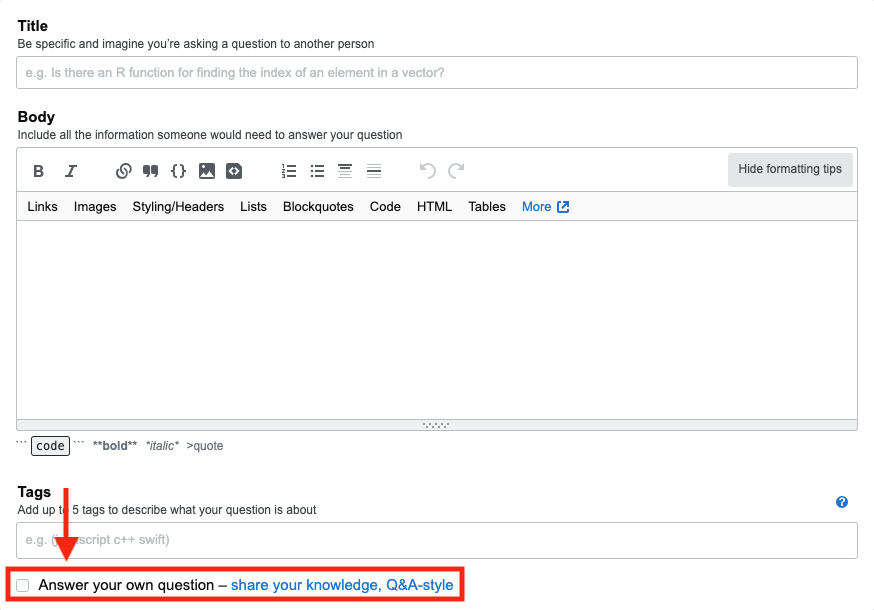 Some bug reports have text or titles that are harder for search engines to find. Often, the bug report will list the root cause of the issue and will be developer-oriented. In this case, a SO post can list the more frequent error message that the users actually encounter more often.

Since Stack Overflow was created with a little bit of gamification in mind, I don't think we can get too worked up over someone actually playing the game. As long as the question is not a duplicate, and is on-topic, etc., then the fact that they are leveraging the bug for unicorn points is beside the point.

Besides, it would most likely only work if they were the first out of the gate with it (depending on which tag the question is in, and the gold-badge holders in that tag).

41
Are link-only answers pointing to resolved bug reports answers?
25
A better way to report broken links
14
Stack Snippet Bug with Tidying CSS
5
Can we close Markdown rendering bugs against a related but maybe not fitting duplicate