Allow gold language tag-badge holders to close too broad or otherwise off-topic questions, but are covered in the language tag wiki, single handedly

In highly active language tags we recurringly see questions from newcomers to the language (not necessarily beginners in programming), which are covered in basic tutorials, textbooks or even Wikipedia articles.

I think those experienced with it will get the picture.

I cannot really speak for major programming language tag wikis other than c++ (C++ tag wiki), but glancing over the ones for Java, C#, C, or Python, they seem to be of equal quality. Most of those questions mentioned above are already answered there, and the OP has probably just missed clicking the link when applying the tag.

Gold badge holders for a language tag should be able to close such questions single-handedly, similar to duplicate hammering (i.e. peers can revert the question closure single-handedly as well, if they feel the reasoning is inappropriate).

Sometimes it is possible to close such questions with a canonical duplicate, but other times we meet such basic questions like the mentioned ones, which aren't really covered in a good duplicate.

For example, sometimes I close such questions as duplicates, but a link to the tag wiki would have been more appropriate. Here's a recent example: 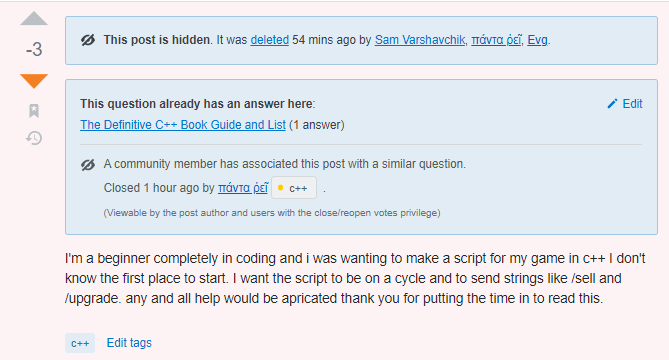 Why gold badge holders? Isn't that a job for site moderators?

The gold badge language tag holders are already trusted to be knowledgeable of the information available in the realm of their tags. Site moderators are explicitly not considered to moderate technical aspects of content as far as I know. Sometimes this coincides, but site moderators also need to choose a general close reason like needs more focus, needs details or clarity, or of course a duplicate question if appropriately available.

While such questions are usually short lived, and are closed for a variety of reasons including as duplicates of canonical or historically locked questions, the OP might have a better experience and get information if they are directly linked to the language tag wiki concerned.

Also this could help to reduce the noise occurring with such questions, which would likely just be downvoted, closevoted and deleted anyways.

From the comments and @Cody's answer here, I believe it's noteworthy to point out, that I am not talking about fast "RTFM" closures, or introducing too basic as a new close reason.

My proposal solely should apply to questions, which are actually answered in the language tag wiki, and there's no appropriate duplicate to select from the questions tagged language-faq.

While I definitely think that question-closing powers need to be expanded in various ways, I am steadfastly against this specific proposal for the motivations cited in the question.

Stack Overflow doesn't do "RTFM" closures. It doesn't matter one whit whether the question has been answered in the documentation, a textbook, basic tutorials, Wikipedia, the tag wiki, billboards, pop songs, the inside of your eyelids, or anywhere else. All that matters is whether the question has previously been asked and answered on Stack Overflow. If it has, then the question is a duplicate. If it hasn't, and it's about programming, of sufficiently narrow scope that it can be answered here, and isn't primarily opinion-based, then it should be answered. It's as simple as that.

This is not about rudeness, or welcoming, or anything like that, so put away your conspiracy theories. This is just about being a Q&A site. Our fundamental mission is to provide high-quality, world-class answers to the long tail of programming questions, with the ultimate goal to become the best resource on the Internet for getting help. No question is "too basic". It's perfectly fine to ask, "How do I output a string in C++?", even though that's literally covered in every "Hello world" tutorial in existence. It doesn't count towards our knowledge base unless it's actually in our knowledge base.

That said, I think what you've actually identified a rather different problem, which should be solved in a different way. You cite several examples of problematic questions, so let's go through those:

That's not "too basic"; that's "too broad". There are only two answers that can be given to this. The first is a useless, one-sentence answer: "It is a programming language." The second is so long that it barely fits in a book. As such, this is not a valid question for Stack Overflow. It should be closed. Not for being "too basic", or because it's already covered elsewhere, but because it cannot be adequately covered here, in our Q&A format.

This isn't "too basic", either. It's... well, it's too broad. It's also primarily opinion-based. There's no one "best way" to start anything. There are a variety of reasonable ways, and thus there could be as many answers provided to this question as there are users on this site. Again, this doesn't fit well into our Q&A format, so it needs to be closed, but not because it's already covered elsewhere.

I can't decide if this one is "too broad" or perfectly acceptable. It would depend a lot on what clarification was provided in the body of the question. If the question was something like, "I have compiled my C# application to an executable, but I cannot run it on my friend's computer. What do I need to do in order to be able to run my C# application on another computer?", then that's a perfectly fine question for Stack Overflow. In light of that fineness, combined with how many years we've been doing this, it's also a duplicate many times over.

This isn't "too basic". We have perfectly good existing close reasons for this. It could be legitimately closed as being "too broad", but it could also be closed on the basis of its solicitation of recommendations for off-site resources.

I'm a beginner completely in coding and i was wanting to make a script for my name in c++ I don't know the first place to start. I want the script to be on a cycle and to send strings like /sell and /upgrade. any and all help would be apricated [sic] thank you for putting the time in to read this.

That's not basic at all! It is, however, a very problematic question by Stack Overflow's standards. It lacks clarity, it lacks focus, and it cannot be reasonably answered in our Q&A format. It's highly closable, but it's definitely not a duplicate of "The Definitive C++ Book Guide and List", so you should absolutely not have closed it as a duplicate of that question.

Sometimes it is possible to close such questions with a canonical duplicate, but other times we meet such basic questions like the mentioned ones, which aren't really covered in a good duplicate.

Yeah. If they're not covered in a good duplicate, and they don't fit any of the other close reasons, then they shouldn't be closed. Closing questions because you already know the answer (or know where to find the answer) is stupid and counter-productive.

So, what's the conclusion? Well, virtually all of these low-quality questions that you're talking about are blatantly inappropriate for Stack Overflow based on established guidelines. For all of the questions that should not be answered here, there is at least one correct close reason already available. That reason is not "Duplicate of the C++ Book List", nor do we have need to introduce a new "Already Covered By Other Stuff" close reason.

What we need to do is expand the powers of gold tag-badge holders to be able to single-handedly close questions as "unclear", "lacks a minimal reproducible example", "typo/not reproducible", "too broad", or "primarily opinion-based" (i.e., the existing standard official close reasons). As you said, these subject-matter experts are in the best position to determine whether a particular question falls into any of those categories. A C++ expert knows quite well whether "How do I display a simple message box?" is too broad to be answered (because there's no built-in GUI support in C++, so you'd have to pick a library, and the answer would be different on different platforms, etc.), whereas a Visual Basic programmer might say that the equivalent question in their language is quite straightforward and deserving of an answer. So, we should give C++ programmers the ability to make that determination for questions in their tag, and Visual Basic programmers the ability to make that determination for questions in their tag.

With closure privileges come reopening privileges, which means that gold tag badge holders would be able to immediately, single-handedly reopen these questions once they were edited into shape.

I cannot tell you how many times a PHP or R programmer has provided me with a link to a question that they believe needs to be closed for being too broad or for lacking a minimal reproducible example, yet when I look at the question, it looks totally fine to me. Why? Are these people just off their rocker, suggesting that questions get closed for inappropriate reasons? Well, sometimes. But usually not! Usually, it's my lack of subject-matter expertise that makes me unable to determine whether the snippet of code that is provided is a minimal reproducible example and/or whether the request is a sufficiently focused one in the context of their language/tools/ecosystem. I just don't know, so even though I have moderator privileges, I can't contribute to the closure of these questions. They need to be handled by subject-matter experts. Who better?

I really believe this provides a better solution to the low-quality questions that are irritating you, and a solution that is consistent with the fundamental mission of the site.

Not the answer you're looking for? Browse other questions tagged feature-request close-reasons tag-wiki tag-badges .

52
Could we have a reduced close vote requirement on "why isn't this code working"?
86
Would it be useful to have an extension of mjölnir close voting powers for (language) tag related close reasons?
12
Abusing tag edits
6
Add a close reason for half-formed profiling questions and allow for gold-badge holders to instantly close as such