Ask Question
Asked 1 year, 9 months ago
Modified 1 year, 9 months ago
Viewed 93 times
4
This question already has answers here:
Minus sign not showing in front of down-vote count in certain cases [duplicate]
When comparing upvotes to downvotes, the minus is missing on numbers above 100 [duplicate] (1 answer)
Vote display minor bug: no + or - with three digit numbers [duplicate]
Strange vote totals in elections (1 answer)
Closed 1 year ago.

In the upvotes/downvotes breakdown you get by clicking on a post's votes, it appears the minus sign goes missing if there's at least three digits worth of downvotes. This can be seen in e.g. What is the "-->" operator in C++? which looks like this to me: 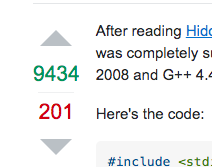 Many other questions with less than 100 downvotes show correctly.

It's not that the minus sign would be hidden, or wouldn't fit the horizontal space: there's plenty of space for the upvotes to fit (and there are cases with five digits of upvotes), and indeed Chrome's Inspect tool shows the generated element as:

In cases with less than three digits, the minus sign is there inside the div. In the one case I found with that many downvotes, all four digits were shown, without the minus...

28
When comparing upvotes to downvotes, the minus is missing on numbers above 100
18
Strange vote totals in elections
7
Minus sign not showing in front of down-vote count in certain cases
4
Vote display minor bug: no + or - with three digit numbers

9
The vote-count-separator between up and downvotes when viewing votes is off-center
4
Vote Breakdown on mobile application?
314
Negative question scores should be prefixed with a − (minus sign) instead of a - (hyphen)
0
How to make the top menu fill the width on a restored window?
21
Unranked users have a blue minus sign by their name on their profile page
2
Typing out nicely formatted code on a cellphone is a far more awkward experience on the responsive UI than the old mobile site was