I earned the right to run fast and jump for joy on Winter Bash—what does this mean?

I see in the drop-down notification menu for Winter Bash that I have earned some right, but what does it mean? 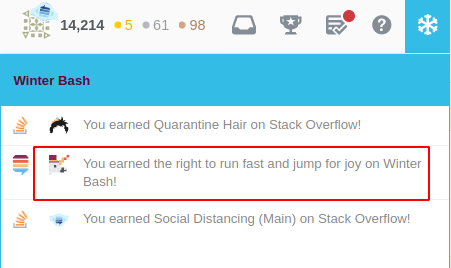 A long time ago in a galaxy far, far away... Yaakov had to single-handedly save a Winter Event. With so little time and so little budget, he reused the previous year's assets and managed to save the day once again. In doing so, our little loyal subject reused an Easter egg from the previous year too, and started a little hunt that probably only a single pony would notice. Many animals had that pony to meet, until they found a single unicorn waiting... A year has passed from that day, and while the chicken moved on and became an actress in YouTube meme videos the unicorn is still there, waiting... The pony now is reasonably confused. What is all of this about? Who is the unicorn waiting for? Will the princess of Friendship finally visit us during the winter season?

Now two equines are waiting under the falling snow... A unicorn and a derpy gray pony.

A little time after,the two new friends were running in the snow, happily jumping over those punny confused humans that were looking at them with surprised faces. A dinosaur joined them for a little, but he wasn't used to the cold winter... and so he quickly went back to jumping cactus in the desert. Time passed, and evening came. The gray pony had to return to their mail-delivery work. "Can we play again tomorrow?", they asked. "Sure" replied the unicorn "but I wont remember you." "Why not?" asked the pony "Did I do something to make you angry?". "An evil ---dev--- wizard put a curse on me. You will have to find a way and break the curse. Unlock my powers and we will be able to play forever". .... And so a new quest had started for the gray pony.

Anyways it is speculated that you have to wear one of the mask hats to get the thing.

Not the answer you're looking for? Browse other questions tagged support winter-bash winter-bash-2020 .

10
How does the snowball fight animation on the Winter Bash page work?
126
Will the winter bash hats be available for download after January?
56
Can I change my mind if "I hate hats"?
27
How can I deal with Winter Bash hats blocking page controls?
8
How do you earn a hat when you have too much rep to do the action?