I saw this hat: 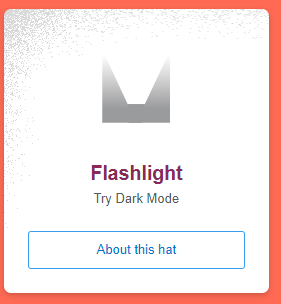 My first reaction was, "SO has a dark mode?!" So I hunted out the setting and turned it on. I didn't like it. So I pretty much immediately turned it off again. Where's my hat dagnamit?! {shakes fist at sky} 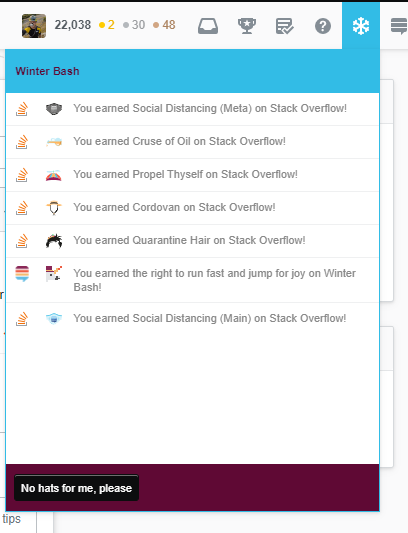 Hats are not awarded instantly; your account is added to a queue that is processed when next there is a bit of time on the server.

Stack Overflow is a busy place and there are many, many other users trying out for hats so it may take some time (up to ~1 hour in some cases) to award hats.

Note that this specific hat will not be awarded if you are not using Dark Mode by the time the batch runs. Try again with Dark Mode enabled (set to Dark) and leave it on until you earned the hat. Just wait an hour or so (should be less but best be sure).

I normally have Dark Mode set to System setting; I had switched it to Dark to earn the hat.

I had the same problem earlier. I don't normally like or use Dark Mode, but who doesn't like hats?! So, upon seeing that there was a hat to be earned by enabling Dark Mode, I promptly went to my profile and turned on Dark Mode. With Dark Mode enabled, I surfed around Stack Overflow, interacted with a bunch of questions, voted on some stuff, edited some stuff, etc. After I felt like I had paid a sufficient amount of tribute to the Dark Mode, I went to see if my hat had arrived. It hadn't.

Now, hats are awarded as a scheduled task, and Stack Overflow is huge, so I thought I might just need to wait a while. Even after waiting over an hour, I still hadn't received the hat, though.

I turned Dark Mode back off and went about my business.

Later, in a flash of inspiration, I finally figured out a workaround to earn my hat: create an account on one of the non-English Stack Overflow sites (in my case, Stack Overflow in Spanish). After creating this account and enabling Dark Mode, I earned the hat almost instantly. Since I can't speak Spanish, I floundered around for a bit trying to figure out how to delete my account on that site, and eventually figured it out by doing a side-by-side comparison with the English Stack Overflow profile options.

I suspect there's a bug here affecting awarding of the Flashlight hat to users with established Stack Overflow accounts who don't normally use Dark Mode. I previously noted this odd behavior in a comment on MSE.

Looking now, I see that I have, in fact, earned the hat on English SO, so I don't know if it was just a caching/latency problem all along, or if earning it on a non-English SO site was required to spur things along.

23
A short-lived bug in a web page which isn't even linked in the question, is a known-good review audit
0
Stack Overflow pages became primitive after sudden slow server-response
13
Personal statement doesn't appear in developer story preview
3
Did I not get the Cordovan hat because I "cleaned up" too fast?
15
Some Stack Exchange assets do not load due to CORS errors for https://cdn.sstatic.net/Img/stacks-icons/* URLs