The console.log in code snippet currently does not support BigInt. To reproduce this problem, you may simply run this code snippet. The console shows null instead of 42. And it should show something meaningful: Maybe 42n or at least 42.

Given that the Stack Snippets Console can't output ES6 data types, and that BigInt is even newer than ES61, it should be noted that not supporting BigInt isn't an isolated occurrence. This is included under the larger umbrella of how the Stack Snippets console hasn't been updated to include support for other, even previously new, language constructs.

As far as I can tell, the virtual console used by Stack Snippets hasn't been dramatically updated with new language features since its initial release, based on the then-current version of @canon's stack-snippet-console script on GitHub.

In the answer from that ES6 snippets post from Oct. 2018, @canon revealed an enhanced version of that same script that supports ES6 types, but it hasn't been updated since that post, for the past 2 years2, and thus does not include support for more recent constructs, such a BigInt.

For example, with your provided snippet: 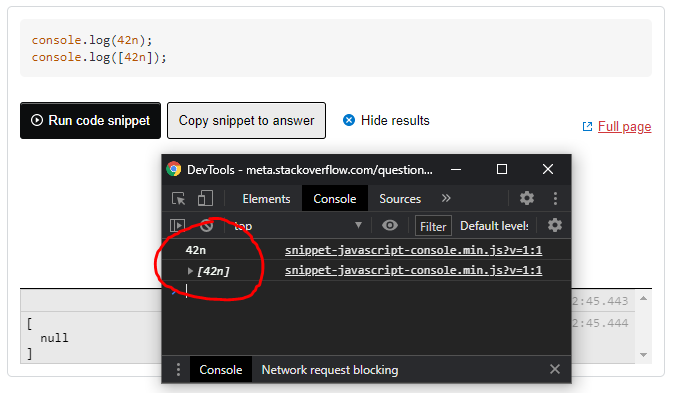 3 - Presuming, of course, that you're using a browser that supports BigInt

Not the answer you're looking for? Browse other questions tagged bug stack-snippets .

90
Stack Snippets console output
15
Bug in stack snippet?
24
Error while calling jQuery.show() in Stack Overflow snippet
3
Snippet results can no longer be scrolled while in the snippet editor making it hard to check results
10
Stack Overflow's snippet giving wrong results
0
Return to answer after expanding a code snippet does not work properly
55
Reassigning window.name inside a Stack Snippet results in unexpected popup