Is this serial/targeted/cleanup downvoting or just a coincidence (again)? Or is this a misuse of a sockpuppet?

I asked a question on meta on 02-Jan-2020 which is now deleted by Roomba. Following is the screenshot: 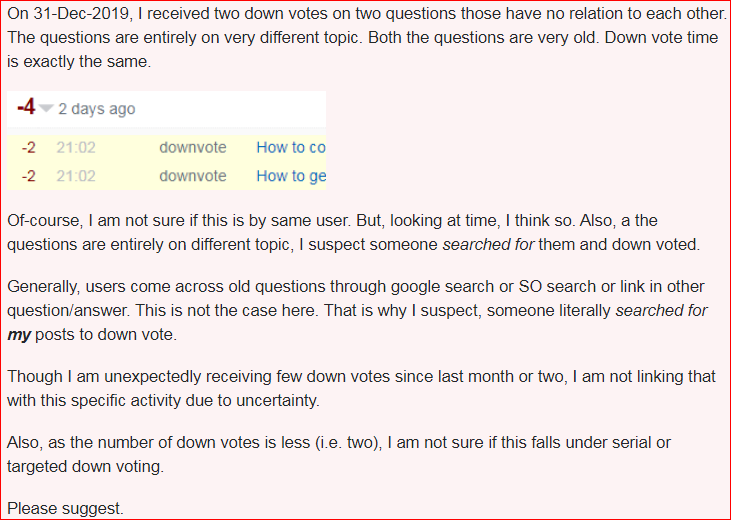 At that time (31-Dec-2019), the time difference between the two downvotes was 7 seconds.

Today, I again received two downvotes (one on each), on the same two questions within a very small time interval. Time difference today is 27 seconds.

Now, looking at comments on deleted meta post, this can not be called serial downvoting. I do not have any evidence for it to consider targeted downvoting either.

It is possible that this was same user, but intent was not necessarily malicious. Both posts are immediately visible on your profile. Both posts are self answered questions that are probably not very helpful for the future. I am inclined to think that downvotes were cast as part of cleanup effort. Somehow someone found one of your posts by accident and then took a peek at your other posts. – Dalija Prasnikar

Other possible reason is "just a coincidence". Following is the part of one of my comment on deleted meta post:

SO is huge, co-incidences may happen. That also might be the case with me. – Amit Joshi

But, I am really surprised looking at the same coincidence with same two questions with similar (very short) time difference pattern.

That made me think, is this a misuse of sockpuppet?

Anyway, I cannot produce an evidence for anything of this. That is why I avoided to tag this as support this time. The best way is to just neglect it and go on.

Is this serial/targeted/cleanup downvoting or just a coincidence (again)? Or is this a misuse of a sockpuppet?

There's no way to know. It could be any of the above, or something entirely different.

I suspect that most likely, it's a user disgruntled with some action of yours. Sadly, revenge voting is a thing, and Stack Overflow's main "solution" to it is to make the cost of downvotes insignificant relative to the benefit of upvotes. The nightly script addresses only the most egregious examples.

For what it's worth, there is also no real solution to serial up-voting, which is also a thing. I can't prove that I've been the target of either, but I strongly suspect that I've been the target of both over the years. This sort of thing happens, and as I keep having to remind myself, none of it really matters much in the long run. It's not worth worrying about, or even trying to figure out.

One more thing: the official advice, if you suspect serial voting, is to flag a post with a custom flag for a moderator. In theory, that's fine. But my experience has been that in practice this accomplishes nothing. Moderators seem reluctant to drag Stack Exchange employees into the situation, and they apparently are the only people who can actually see who has voted for what and when to evaluate a specific case on that basis, and to modify any voting activity.

In practice, raising a flag for the serial voting is probably only a useful thing to do when you feel that you are seeing an extended pattern of serial voting, e.g. serial voting that flies just under the daily-script radar and which goes on for several days repeatedly, at least.

For the occasional temper-tantrum, there really isn't much else to do than to let it go.

205
Stealth revenge-downvoter: a downvote a day keeps the reversal-script away

205
Stealth revenge-downvoter: a downvote a day keeps the reversal-script away
10
When does downvoting get "serial" enough to be worth reporting?
7
Serial downvoting imperfectly reversed
8
Is there a better course of action for when detecting an unusual surge of complaints about downvotes around a specific tag?