We have a number of tags on the site for PHP minor releases. While it is true that PHP does not follow semantic versioning correctly and there are a number of differences between each version, I started to question the usefulness of these tags on Stack Overflow recently.

PHP 5 has reached its end of life in December 2018 and now with the release of PHP 8 the manual for PHP 5 will be archived. Anything before PHP 7.3 will no longer be supported and all existing development should upgrade as soon as possible to a supported release. [1]

People often misuse version tags by tagging only with the minor tag without the main php thus leaving the question to rot in the dark corners of the site. Usually, the tag has no significance other than it being the version OP is currently testing the software on. There are legitimate uses of version-tags e.g. asking about a new feature or a workaround for a removed feature.

We have currently following PHP tags:

What are your opinions how to deal with the minor PHP tags?

I don't understand the logic of merging tags once versions become EOL. Since version-specific tags should always have the base language tag as well, "merging php-5.3 into php" in practice means "deleting the php-5.3 tag from all questions which have it".

If a question is "how do I use this new feature in PHP 5.3?" (or 7.3, or 8.3), the question doesn't change after PHP 5.3 becomes EOL, it just becomes less relevant to most users. If the version tag was appropriate when the question was created, what value does it have to go in years later and delete it?

So really I see only two options:

Personally, I think that while version tags would be much more useful with better software support (e.g. automatically adding the base php tag, or treating them as "sub-tags" rather than requiring both), there is still some value in them for some questions, so they should remain as an option.

I think there is value in keeping a tag which represents all the PHP5 versions. There are questions that relate to PHP5 that have no value to someone using PHP7 or PHP8 as the functionality in PHP5 has been removed/replaced in those versions, and seeing a php5 tag on a search result might allow a user to quickly discard that. Since the php5 tag has already been merged into php tag, I would propose merging all the php-5.* minor version tags into a php-5.x tag and adopting that strategy for php-7.* (including php-7) when PHP7 goes EOL.

In terms of synonyms, It seems all non-EOL versions should be synonyms of php so that questions with only the minor version show up to people hunting for the php tag.

For current development, it make sense to be able to get answers to the latest versions of PHP and know you are working with the best up to date knowledge.
The problem is that there are probably a lot of sites still out there running older versions of PHP and most will either never be updated and just patched up occasionally or (even worse) just receive updates to their current code.

Not 100% sure of how accurate the information on https://w3techs.com/technologies/details/pl-php is, but the graph on there shows (as of date of posting this)...

IMHO, to maintain the usefulness of the site to all those unfortunate enough to have to find specific answers to PHP 5 versions of the code it is important to keep some idea of what answers are relevant to PHP 5.

And a breakdown of the sites on Version 5 (from https://w3techs.com/technologies/details/pl-php/5)... 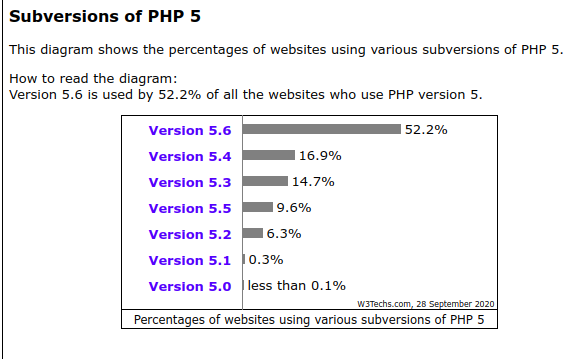 As others have suggested, maintaining a group for PHP 5 is good, but as there are important features that vary between even subversions of PHP 5, I would think that is is helpful to be able to look for specific versions still.

As a hoster/developer who had to manage no less than six different subversions of PHP 5 there were enough oddities and breaking changes in those PHP 5 minor versions for them to be considered first class versions in and of themselves.

I would wholeheartedly recommend option one and leaving these tags well alone (but perhaps they should also have the php tag as well).

Even now I still have to deal with all sorts of messes that are specific to these minor versions. In these cases the minor version tags have been useful in ferreting out changes in behaviour without initially having to trawl the PHP changelogs.

Sure yes, these users should upgrade, but that's not my decision to make.

I think we still get a lot of PHP 5 questions, they're just not tagged as such. We sometimes find out that they're PHP 5 questions when the OP says the answer doesn't work for them and it turns out that's true because it uses some cutting edge language feature from eight years ago, or when they eventually say that the code+error that they posted only started happening after they changed hosts. I'm not here as often as I used to be, but pretty much every time I browse new questions there's still someone using the old mysql extension.

I have mixed feelings about the benefit of the minor version tags, though. There are some pretty significant differences between some of the 5 versions, particularly 5.2 to 5.3. Unfortunately, often when someone could benefit from adding the version tag, they don't do it because they don't realize that one of those differences is actually the cause of their problem.

Still, if someone who is aware of the differences wants to ask a question about a problem they need to solve using their particular old version, the tag could be useful information to an answerer, so overall I'm in favor of keeping them, even if they're not useful very often. I definitely agree with you about the necessity of the main php tag in addition to the version tag, but I think there are probably enough people that watch php-* that the questions that omit it won't go unnoticed. We should always be adding that tag if we notice it's missing, regardless of what happens to the minor version tags.

I'm working on legacy, busted PHP 5 that we will never have the bandwidth to upgrade, nor does it have very long to live in terms of the SDLC.

Why couldn't I tag my questions with PHP 5 if I needed help in PHP 5 where an answer that goes like "upgrade your PHP and then we'll help" is equivalent to spitting in my face??

I reckon people don't really invest a whole lot of brainpower into evaluating if their problem is version-specific or not. (And none of us has time to curate whether a minor version tags are relevant to a post.) However, in cases where OP's issue is version-specific, I'd rather see the version number up-front, than have to ask for it to confirm my suspicions. (OP might also add it to post body, but does that happen much, vs. version indicated via tags?)

I'd like to suggest the following, first on minor tags:

Then, on major tags:

And, in the future, keep creating minor version tags to provide a facility (aside post body) for indicating version-specific concerns. (With editors removing them when irrelevant.)

Posts with only PHPx or PHPx.x tags should also be syndicated to the vanilla PHP tag to ensure PHP-tag followers get the whole scoop when posters forget/don't think to to add the main tag. (Perhaps it should be auto-included when a versioned tag is used?)

The following is basically a feature-request. It's included here as a possible outside-the-box device for deprecating version-specific tags without loss of (facilities for communicating and finding) relevant information. Will make a dedicated post on it soon enough.

Then, on facilitating the availability of debugging information:

Additionally, it seems that consistency is a virtue in handling this between version-specific tags for different languages. Does anyone have a summary of them to share for reference?

“What version PHP are you using?”

I like option 4 but I would merge all of the minor PHP 7 tags into the php-7. As you say, once PHP 7 goes EOL merge it into PHP.

1
What to do about [teamcity-*] and [resharper-*]?
18
Should we really support tags for minor versions, i.e. [asp.net-core-1.1]?
4
SQL Server On Linux and SQL Server version tags
16
Merge tags into GSAP
8
Does "changes in version N" also encapsulate dot releases?