I got a review suspension because I voted for "Requires Editing" on triage/26950302.

Thanks for the answer. I now understand it is really "forbidden" and not just discouraged to post pictures of code/console output/errors. I also understand that the escalation is not "look ok" -> "requires editing" -> "unsalvageable" as the LTR order indicates but "unsalvageable" -> "requires editing" -> "looks ok" to be more rigid to low quality posts.

In my opinion, this clearly needs editing to correctly inline the image, remove unneeded punctuation, and so on as it matched these criteria:

The "Requires Editing" action should only be used when other community users (like yourself) are able to improve an answerable question with editing or formatting.

I voted on this 6 hours ago:

2 hours ago it WAS edited by someone (obviously I was not that wrong with my assumption): 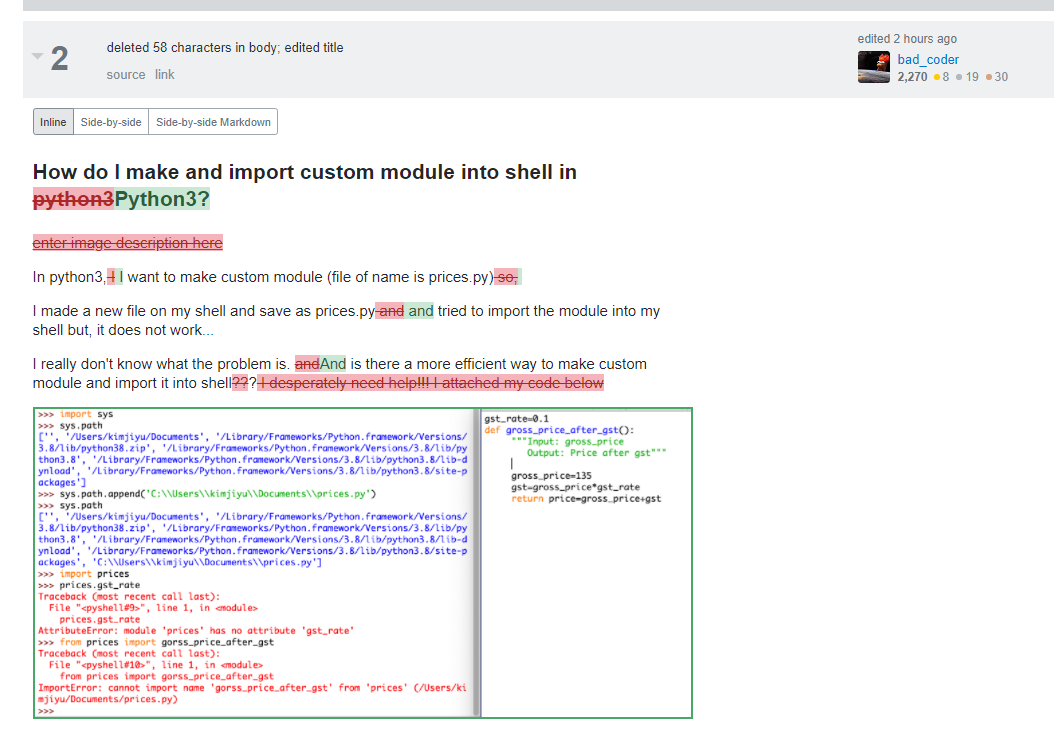 And now, 1 hour ago I got review suspended again for using "requires editing" wrong.

After my latest suspension, I'm totally aware that requires editing should be used when the post can be improved by someone editing it (which obviously was done).

But why am I again suspended?! The reason why I voted for requires editing was clearly not given at the time I got suspended because it has been edited in the meantime. If one only gets banned from using "requires editing" just remove the option because it's useless if you get banned AFTER the post has been already changed.

I'd really like to understand why I'm been suspended again and why voting the way I did was wrong in the opinion of the moderator. Unfortunately, getting banned does not help the slightest in understanding the reason.

To be clear, I did not vote on "requires editing" because I think someone should transcribe the image (as some commenters think). This should clearly be done by the creator but because there are other problems with the post. From the link @BDL gave me, points 1,2 & 4 apply under these circumstances. From the general perspective, the output itself as an image is "ok-ish" in my opinion and just the code needs to be added "as code" which OP could do after being asked to do it as a comment.

If any picture containing "Text" is forbidden and the question therefore by default faulty, this should be mentioned for the "requires editing" button.

Even with the edit applied, this specific post is off-topic because it contains the code and errors only as image instead of text. Transcribing text from images is something the original author should do, not some random editor.

About whether the question should be closed: As others have pointed out, there are two pages which talk about posting images of code instead of text:

How do I ask a good question?, which states:

DO NOT post images of code, data, error messages, etc.

and Why not upload images of code/errors when asking a question?

919
How does the Triage review queue work?
170
Why should I not upload images of code/data/errors?
222
When should I make edits to code?

195
Why was I suspended from reviewing for selecting "Requires Editing" in Triage?
90
Why did I receive a nine-months suspension because I reviewed something to 'Requires editing' instead of 'Unsalvageable'?
62
Failed First Posts review audits are not cleared after suspension period has ended