I've been following the controversy around the introduction of the "Thank you" react, and one thing that stuck in my mind is that there is a perception that 1. Users don't upvote/accept enough, and 2. the thank you will be an additional road block. This got me thinking, why should people react positively to an answer, leave a comment, but fail to upvote?

The UX design of voting doesn't mesh with social media

For better or worse, the vast majority of users (new and veteran alike) interact with social media regularly, and as such, we are subtly trained to expect things to appear in a way we are familiar with. Regardless of whether StackExchange wants to be in this space, it dominates the internet landscape. If you look at websites like Facebook, Twitter, Reddit, Instagram, etc. etc., there are some elements of convergent design in the user interface. In short, they have the content front and centre, and commenting and voting follows immediately below the post. 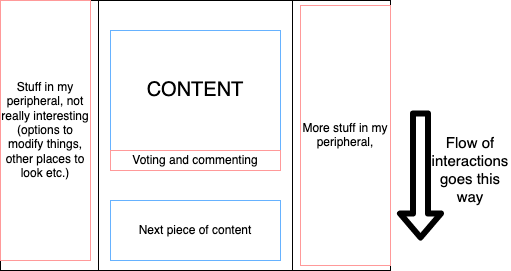 If you look at what happens on a StackExchange page, it looks like the image below. What do you notice? It didn't occur to me immediately because I've been using SE for many years, but...

In fact, the only thing that I can see for interacting with the post is a piece of text called "add a comment".

Now obviously as you become more familiar with the website, you start to learn the layout and can find the voting buttons, but for a brand new user (which as I understand is where the main issue arises) this is probably enough to stop me from voting. And I don't think this is a problem of new users not wanting to vote, how often do they click "add a comment and say something like... 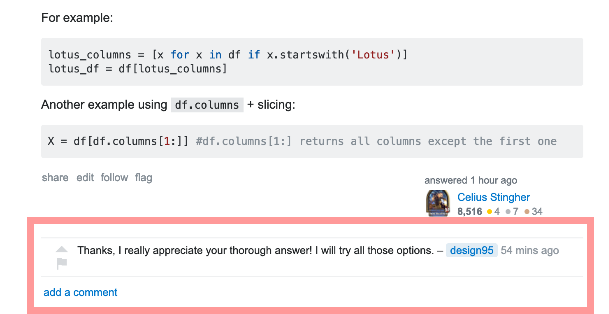 This is from a new user who hasn't accepted the answer OR UPVOTED - at the time of screenshot, the vote tally for the answer was 0. And yet again, I can't see the upvote or accept buttons here. The (admittedly slightly contrived) full screen looks like this: 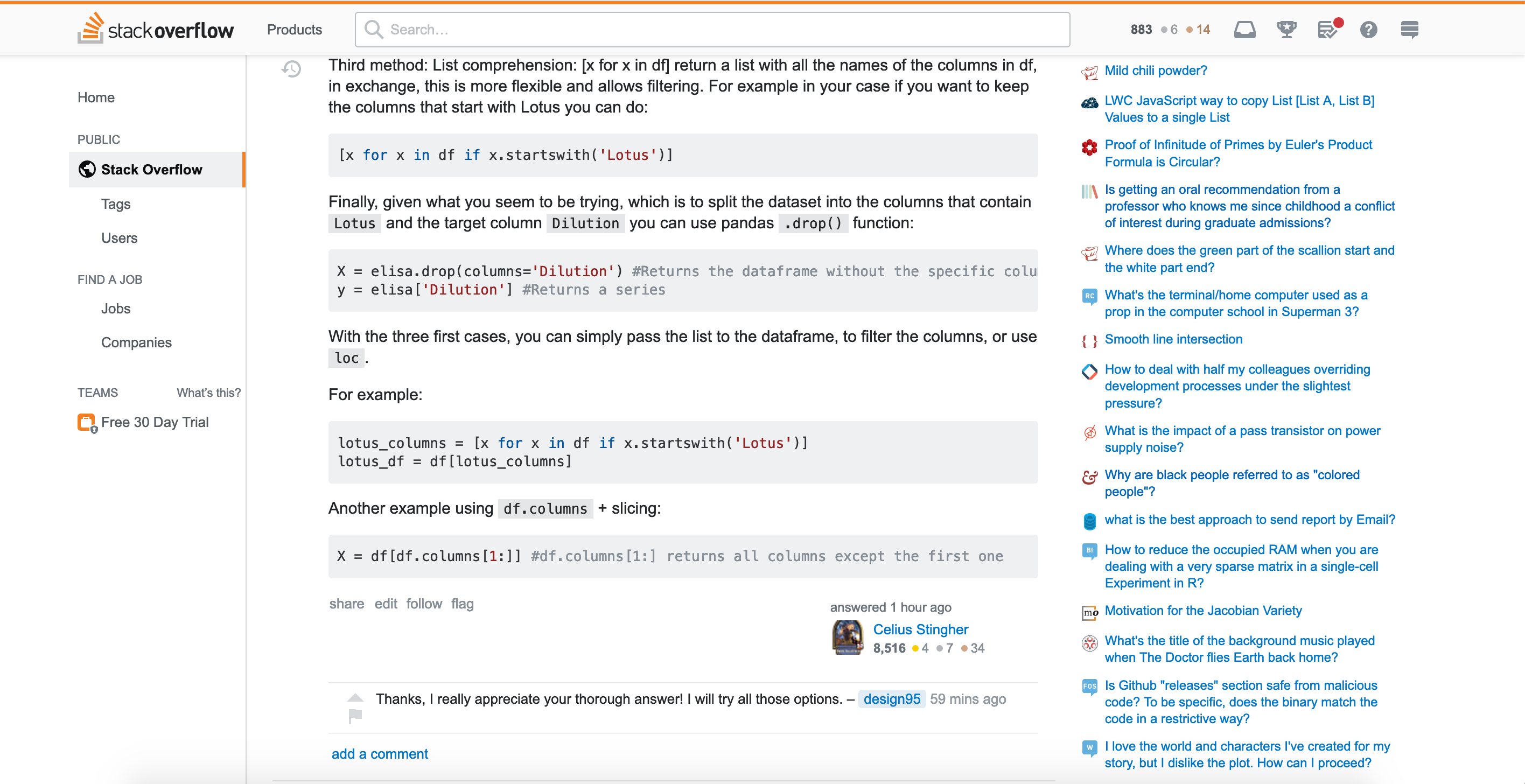 No voting in sight! I would even go so far as to say the act of needing to scroll back up to the top to vote once someone is done reading could subtly discourage even regular users from taking the effort to vote.

Crazy Idea 1: put voting and accepting next to the "sign off badge"

Clearly even new users want to express gratitude for the effort someone has taken to answer their question. There's a little box down in the bottom right hand corner that identifies the answerer, and I would say I'm often more drawn to that as a measure of quality of answer than anything else - the reputation number adds weight to the opinion presented. Now imagine if the voting was next to the answerer. Not only would the upvote be much more connected to the person giving the answer, but you could even get immediate feedback that your vote counted for something! (If the users rep increased on clicking the button).

We could even add in an obvious little box under the user card designated for thanking the user directly. This could then hang around for (say) 10 days, and be deleted after that. This way the thanker gets to say thank you and they are filtering out their comment themselves. To stop users from using the thank you box for follow up comments, there could be some helpful text directing them to the comment box.

Crazy Idea 2: Make the votes follow the user down

As for the vote tally for the given question/answer, keeping that at the top makes perfect sense. You want to get a quick idea of what the consensus on the quality of the post is before committing time to reading it, so it needs to be seen at the top. But again once you scroll down, the vote tally vanishes and you lose that little bit of feedback about the quality of the answer. So how could we fix that? Maybe with a follower.. 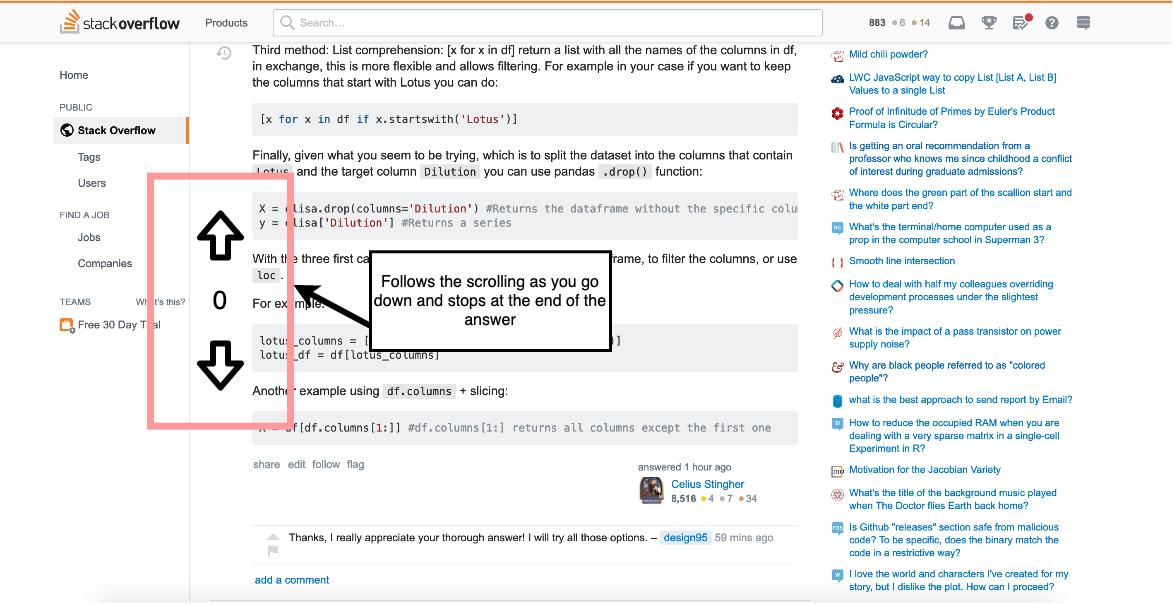 This might be enough for the person reading the answer to remember to vote at all. The accept answer button could float down with the voting buttons as well.

Another issue is that new users might not know what is expected of them with the voting system. And in fact, sometimes I even forget what it's for. Any user interface that requires you to refer to documentation to use it properly (especially when new users are involved) is not doing its job in my opinion. So, why make (new) users guess what the intent of features are and chastise them when they get it wrong? Why not tell them specifically what is expected? Give them descriptive buttons where they expect them that guide them in the way to use the site! 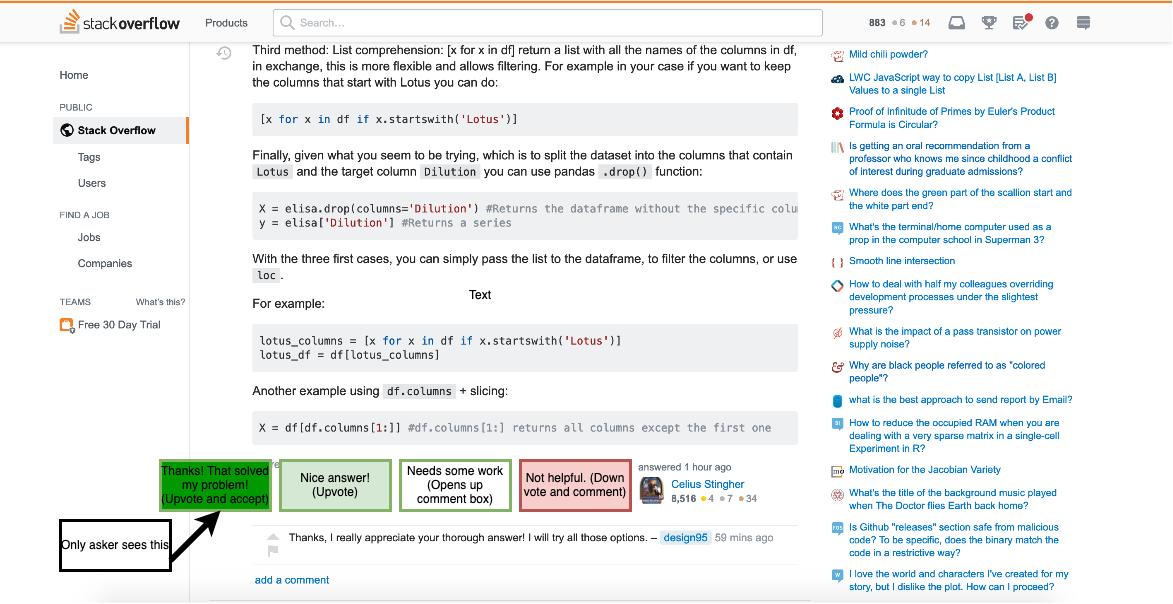 (The exact text in the boxes is just a place-holder, the main idea is the buttons have some form of guiding description) This method has the benefit that the dreaded comment box is hidden until it is needed/requested, and the point of the comment is made abundantly clear. These don't need to be permanent fixtures either, they can be "training wheels" that appear for new users until they get the hang of it.

This all came to me last night while I was ruminating on what's special about SE and the problems it faces. But I freely admit I'm a lurker and not someone deeply involved in the community. Maybe these ideas have been posed before and shot down for various reasons that I don't know about. Either way, my point still stands, the voting system is at odds with the way (new) users are trained to expect voting to work through social media. SE is not meant to be social media, but why not lean into the way users have been trained elsewhere and leverage it in our own unique way, rather than working directly against it?

Crazy idea 1 is right out. That's simply a no-go. It would make it look like votes are on the user, when they're not—they're on the post (i.e., the content).

Crazy idea 2 is actually quite reasonable. In fact, I have a userscript that makes the vote arrows (and everything else in that sidebar) "sticky", so that it follows down the viewport as I scroll the answer. This is particularly handy for long answers, so that I can vote on them accordingly after I finish reading them. I also find it useful when curating/moderating content: since the "close"/"delete" links are at the bottom, while the vote arrows are at the top, this saves a lot of scrolling when I want to both vote and close/delete a post.

If you want to try it out yourself, all that needs to be done is injecting the following style into the page's CSS:

(The increased z-index ensures that the new, "Stacks"-style tooltips appear properly on top of the main content. Without this, the improperly-coded tooltips appear behind the text of the post.)

You can also install this userscript, but it does more than just this, and will be expanded over time according to my own whims, so caveat emptor.

Something like this has actually been proposed before, many years ago, as a new feature for the site. If I remember correctly, it was tried out, but ultimately the developers decided not to introduce it. I've been using this userscript for a while now, and I haven't found any real side effects. I would have no objection to introducing this as a first-class feature, although I don't have any real expectations that it will make any measurable difference to behavior. But that doesn't make it any less valuable as a way to save a couple of rolls of the scroll wheel.

Crazy idea 3—meh. I just don't buy this. Folks who have voting privileges should already know what the voting system means and how it works by that time. Besides, the voting system just isn't that complicated. An upvote means "I like this"; a downvote means "I dislike this". What could possibly be simpler? Now, yes, there are many reasons why you might like or dislike something: it does/doesn't show research effort, it is/isn't clear, it is/isn't useful, it is/isn't correct, etc. But those are all details, and something that is easily intuited as a "like"/"dislike" reaction. Adding more buttons here means more choices, and thus more friction. Adding more text means people are less likely to read it, and thus less likely to feel comfortable voting. It also means more clutter on the page for everyone else who already understands how the voting system works (which, as I already said, isn't that difficult or confusing, or even different from the rest of the Web). A final objection to this is that it veers dangerously close to past suggestions that users need to provide a reason why they vote. With all of that considered, I'm more on the "no" side than the "meh" side for this particular suggestion.

514
Why isn't it required to provide comments/feedback for downvotes, and why are proposals suggesting this so negatively received?

213
Can we make it more obvious to new users that downvotes on the main site are not insults and in fact can help them help themselves?
16
Can we make the answer score and up/downvote buttons sticky so it scrolls with you for long answers?