What is "visa sponsor" in Stack Overflow Jobs?

On the Stack Overflow Jobs site you can select "visa sponsor" option when searching for the offer. It sounds like important information for my case but I could not find details of what it means.

Does it mean they are paying/petitioning for some sort of work Visa in a particular country? Or just facilitating work visa process but not paying for the Visa processing? Or something else?

Here is an image showing the "Perks" option and some results with "visa sponsor" mark (It also looks like applicable to many countries - Germany in this case): 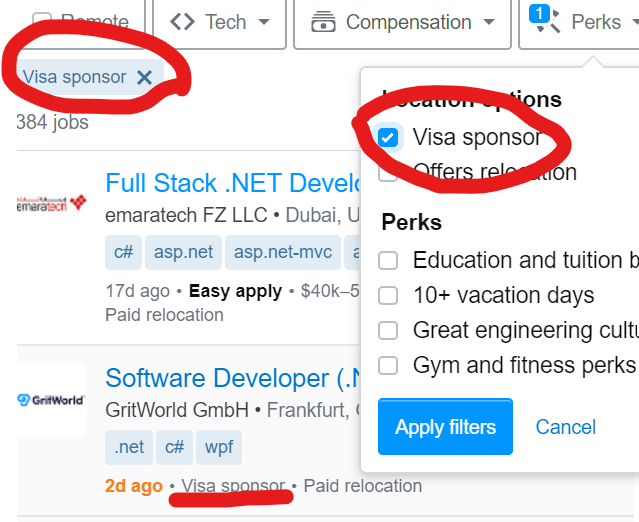 This actually isn't a term that's specific to Stack Overflow - it's basically one means by which you can get legal authorization to work in the U.S. There are certain visa programs, such as H-1B, that can allow you to be authorized to work in the U.S., but they require an employer to "sponsor" the employee (i.e. request it on the employee's behalf); you cannot initiate this process on your own in order to be eligible for those programs, only a potential employer can.

Unfortunately, this process tends to be expensive and time-consuming for the company who provides the sponsorship, so not all companies are willing to do it (especially smaller companies), hence the option to filter by companies that are willing to do it. If you don't already have authorization of some kind to work in the U.S. (e.g. by virtue of citizenship), in order to work in the U.S. you will most likely either need to be sponsored to be part of the H-1B program or find some alternate way to get the authorization without help from an employer. (There are other circumstances that can simplify this, such as being married to a citizen or, in extraordinary circumstances, political asylum).

So the term is more about them being willing to initiate the legal procedure to allow you to obtain a work permit than about them paying a particular expense.

I'm not familiar with how other countries do this, but that's how it works in the U.S. at least.

EJoshuaS's answer is already good enough in the context of US H1B visas, but I just wanted to state it a bit more simply:

Many countries have issues sourcing qualified talent for their teams, especially if they want people on-site. Sometimes, it's worth it to a company to relocate a candidate to the country in which they will perform work.

Depending on the originating country and the destination country, a work permit/visa/etc. is required to live and/or work there for any extended period.

Oftentimes, these permits require an active company to back it - if you leave the company, oftentimes you need to find another company to "transfer" the permit to, or risk being sent back to your home country.

The listings companies post on most sites (including StackOverflow jobs) allow them to indicate whether or not they'll be willing to not only pay for, but "sign on to" or back, the visa/permit/whatever - which is important to distinguish because not all companies do it due to the associated costs, legal requirements, effort, timelines, etc.

It's different from a perk here, I think, because it's a bare-minimum requirement for a lot of the potential candidates to even begin the interview with them. It's not the same as a competitive perk, which is usually sometime nice to entice a candidate to choose one company over another given all base-requirements are the same between the two (that's the theory, at least).