Data validation & background for the Thank You Reaction feature test

Thank you all for voicing your feedback and your concerns regarding the test of the Reactions feature.

We would like first to give some additional background surrounding the intentions around this feature, and make things more clear than they were in the first post: Finding a way to allow users to say “thank you” without using a comment is something that we do want to address through this feature. But beyond that goal, this feature is also intended to provide an alternative way for users to express their appreciation for the efforts of other users, using a paradigm that is familiar to them from other sites on the Internet.

Admittedly, this is a feature that may not appeal to some users and may find more adoption among those who have less experience on Stack Overflow. That said, we do want to make sure that if it is adopted, it will be done so in a way that will maximize benefit across the site, while preventing any negative effects to existing network practices and norms.

To address some concerns that were voiced thus far: Voting and its proper use as a means of giving feedback continues to be extremely important. This feature (in any way that it may eventually manifest itself) is not intended to replace voting or lessen its use, and a large amount of our analysis after the test will be aimed at ensuring this.

To that end, here are some of the things that we are monitoring during the test, and that we intend on analyzing after the test is concluded:

We have seen and are cataloging the feedback and suggestions given already relating to ways and reasons that this feature might or might not work in achieving its goals. And we are keeping an open mind about functionality here — the current manifestation of the feature (including even the two images currently being tested) is in no way final. Ideas related to experimenting with the placement of the button or prompting users to give an upvote if they give a reaction without voting are great. Please keep them coming!

We are also considering ways to allow appreciation that is given (through reactions or otherwise) to be surfaced more easily to the recipient (without abusing notifications), as well as to find ways to strengthen and improve user education around the proper use of voting and comments.

Lastly, we would like to confirm here that the current iteration of the Thank you Reaction feature will be turned off at the conclusion of the current test (on July 17), while we analyze the data and consider the different feedback that has been given, to find the best way forward.

Update: As promised, the experiment has ended, and the Reactions feature has now been disabled on Stack Overflow.

Lastly, we would like to confirm here that the current iteration of the Thank you Reaction feature will be turned off ... while we analyze the data and consider the ... feedback ... to find the best way forward.

Please don't. Your time is much better spent doing other things. There is no need to move "forward" with this feature; instead, now that you've remove it from the site - just let the matter go.

Ideas related to experimenting with the placement of the button or prompting users to give an upvote if they give a reaction without voting are great. Please keep them coming!

OK, I have an idea I'd like to share. (I apologize in advance if it has already been proposed by another answer in this or the previous thread. I tried to at least skim over all of them, but due to the sheer number, I might have missed one.)

I am a high-rep user on SO, but I also read some other SE sites where I don't even have an account. I like the idea that even users who do not have upvoting rights can give feedback on a post.

Since this feature is highly disliked by high-reputation users (according to the feedback here), why not do the following:

Thus, "thank-you"s would become some kind of "upvote from anonymous and low-rep users without affecting reputation". Yes, allowing anonymous users to give thanks would allow "thank-you fraud", but since "thank-you"s don't affect reputation, there would be no incentive to do that (and even if people did, there's little harm done).

"Thank you for your failure!"

Correct me if I am wrong, but logically isn't this the only case when a "Thank you" would differ from an upvote? Certainly fits the spirit of the times. But on a technical forum? It would certainly slide for discussion of CSS, but what if it is like software controlling voltage or pressure tanks? Just wondering...

How about the training wheels approach where we gradually introduce new users to the idea that on StackOverflow / StackExchange sites upvote == thumbs up == thanks?

At the start, new users will see a "thumbs up" button right next to the regular upvote button, but when they aim for it, a larger uniting button is revealed, and a hover tooltip explains that they are one and the same.

After the user has clicked that big button a few times, make it smaller, but still show the "thumbs up" for a few more times. After we're pretty sure the user now knows where to click for "thanks", make the upvote button look like it normally does, and remove the "thanks" part from the upvote button hover message for them. 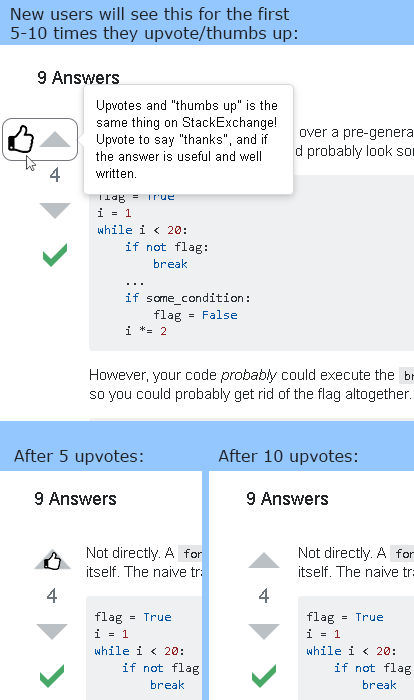 Why don't we just ask users to up vote answers rather than saying thanks?:

Edit after update and 'feature' turned off:

I hope that the number one bit of feedback they take from this experiment is that they could try running some of this by us before making a site-altering change. The conglomerate of users here have loads of experience with these kinds of features. We can offer guidance before taking actions that yet again threatens to alienate the community from itself and from the company.

The only way this 'feature' is of any use is if it's restricted to unregistered users. Otherwise we already have a voting system. You can always fiddle around with that if you really feel the need. If you had bothered to atleast try and run this idea by us before implementing it, an idea that can change the nature of how this site works, we probably could have warned you of the consequences, including how well it would be received.

Instead, allow anybody to vote up, registred or unregistered. BUT if they are unregistered or have reputation lower than 15, their 'vote' goes towards this little 'Thanks' counter. If they vote down, they get an annoying popup saying that they have to register to vote down (if they register, then they get the extant feedback regarding reputation), but you guys keep track of it either way. Any up vote by a registered user with high enough reputation automatically likewise adds to the 'Thanks' counter.

This way you get real data of the voting patterns of all users of this site, registered and unregistered. You are still prompting people to register as is clearly in the interests of the company (you'd be surprised how many people will register just to get their downvote in). And the identity and nature of the site as a Q&A remains relatively unscathed.

Maybe that's a brilliant idea. Maybe that's a terrible idea. Maybe it's somewhere in-between and workable with some tweaks. But without two-way feedback from the people who use this site the most, you're just throwing mud out onto the wall and trying to see if anything sticks.

NOTE: This would be a comment if they were not locked with a message stating to post as answer instead:

This is only tangentially related, but I thought that an upvote was intended to indicate a high quality post, not for appreciation or "thanks".

I have had several times when I can tell someone put a lot of time and effort into an answer for me. But it did not work. It was incorrect for some reason or another.

But maybe the post helped me thing about the issue in a different way (though it is still not right), or I am just grateful for the amount of work they put in. A "Thanks" feed back option may fit there.

I am not really sure one way or the other on the "thanks" feedback.

This comment/answer is intended to see if there really is a distinction between upvotes for "thanks" and upvotes for a "high quality answer" (and if an upvote should be used for one, or the other, or both).

Not the answer you're looking for? Browse other questions tagged discussion comments voting reactions thanks .

33
Retiring New Navigation (beta) in preparation for Navigation 3.0
86
Downvotes Survey launching Oct 15, 2020
413
Can a machine be taught to flag comments automatically?
121
Now that the Edit Question button for closed questions is more prominent, it's time to stop non-OP edits from submitting to the reopen queue
27
When should I react (say thanks) to an answer and when should I upvote it?
69
“You can edit the question or post a new one”
30
Duplicate modal doesn't accept Enter after pasting link
29
Was there a community requirement to have reaction feature so "instead of clicking on like, you can just say 'thanks'"?
77
Why doesn't the system prevent repeating the exact same question?
43
Remove obsolete page describing "reactions" from Help Center
See more linked questions

36
What is the '100' reaction supposed to mean?
4
I can react on my own post in Teams
29
Was there a community requirement to have reaction feature so "instead of clicking on like, you can just say 'thanks'"?
29
The "Thanks" feature may be encouraging "Thanks" comments
37
Some crazy ideas that might help voting and make the "Thank you" reaction redundant